Seafood Safety After an Oil Spill 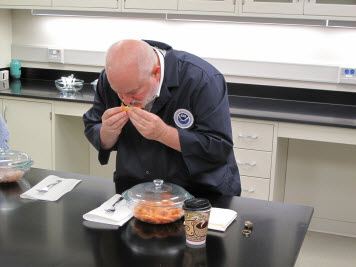 When oil spills into coastal waters, both federal and state governments have established protocols to test and monitor seafood safety. When spill response managers determine that seafood may be affected, the next step is to assess whether seafood is tainted or contaminated to levels that could pose a risk to human health through consumption.

According to the U.S. Food and Drug Administration (FDA), there are two ways that oil can cause seafood to be unfit for consumption.

The first is through the presence of certain levels of chemicals known as polycyclic aromatic hydrocarbons (PAHs), some of which are carcinogenic. (Oil is composed of many chemicals. However, it is the carcinogenic, or potentially cancer-causing, PAHs which are of greatest concern because they can be harmful if consumed in sufficient amounts over a prolonged period of time.)

The second way seafood would be considered unfit for consumption is if it smells or tastes like a petroleum product. This is known as the presence of "taint." Under U.S. law, a product tainted with petroleum is considered "adulterated" and is not permitted to be sold as food. Petroleum "taint" in and of itself is not necessarily harmful and may be present even when PAHs are below harmful levels; however, it should not be present at all.

NOAA, in collaboration with FDA and state health agencies, may conduct a combination of both sensory analysis and chemical analysis of tissue to determine if seafood is safe following a spill. The NOAA Seafood Inspection Program is often called upon to perform screening and training tasks following major oil spills. Program experts perform sensory analysis to detect oil taint. Additionally, NOAA's science centers may conduct chemical analysis for petroleum contaminants.

The following OR&R publications provide information about monitoring seafood for contamination after an oil spill:

Managing Seafood Safety after an Oil Spill [PDF, 1.0 MB]: This 2002 guide was written to help seafood managers and other spill responders determine appropriate seafood management actions in response to a spill.

Guidance on Sensory Testing and Monitoring of Seafood for Presence of Petroleum Taint Following an Oil Spill [PDF, 1.7 MB]: This 2001 guidance document describes how to conduct sensory testing on seafood suspected of petroleum taint.

During the Deepwater Horizon/BP oil spill in 2010, NOAA Fisheries Service worked closely with the FDA, the Environmental Protection Agency, and state health and fisheries agencies in the Gulf of Mexico region to establish a protocol for use in re-opening oil-impacted areas closed to seafood harvesting. You can read more about the FDA's testing protocol to re-open harvest waters that were closed in response to the Deepwater Horizon/BP oil spill.

Ensuring the Safety of Seafood after the Deepwater Horizon Oil Spill [Video]: Offered by the Gulf of Mexico Sea Grant Oil Spill Science Outreach program, this short (< 3 minute) video describes how scientists with federal and state authorities worked together after Deepwater Horizon to ensure Gulf seafood was safe to eat.

Passing the "Sniff Test": In Assessing Gulf Coast Seafood, the Nose Knows: The chief quality officer for NOAA's Seafood Inspection Program provides a behind-the-scenes look at what it takes to ensure that the seafood that reaches your local market or seafood counter is safe to eat.

Improving Seafood Safety Management After an Oil Spill [PDF, 1.6 MB]: This paper, published at the 2003 International Oil Spill Conference, aims to ease and expedite the decision-making process of seafood safety managers in the wake of an oil spill.