During a spill response, sensitive locations threatened by an advancing oil slick can be protected with various kinds of equipment and tactics. 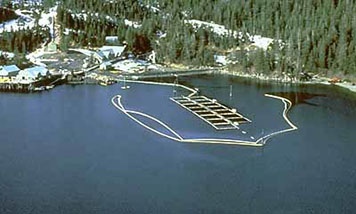 Boom surrounds a set of floating net pens at a salmon hatchery in Prince William Sound, Alaska, to protect the pens from oil spilled from the Exxon Valdez.

Booms are floating, physical barriers to oil, made of plastic, metal, or other materials, which slow the spread of oil and keep it contained. Skilled teams deploy booms using mooring systems, such as anchors and land lines. They commonly place boom:

There are three main types of boom:

Skimmers are boats and other devices that can remove oil from the sea surface before it reaches sensitive areas along a coastline. In the photo below, oil is being skimmed from the sea surface by a "vessel of opportunity." Sometimes, two boats will tow a collection boom, allowing oil to concentrate within the boom, where it is then picked up by a skimmer. 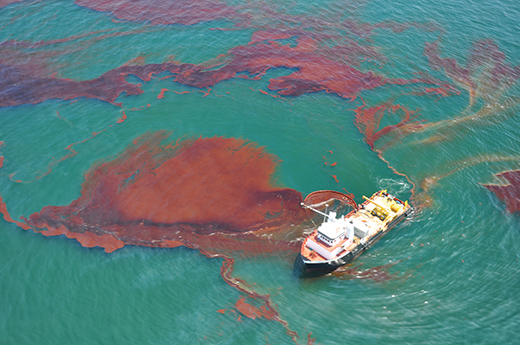 A "vessel of opportunity" skims oil spilled after the Deepwater Horizon/BP well blowout in the Gulf of Mexico in April 2010. (NOAA)

If local authorities and response experts agree, other possible—but more controversial—measures responders might consider include: 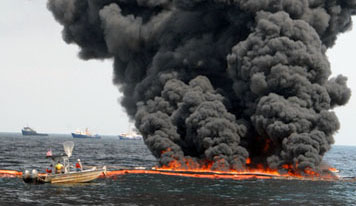 NOAA worked with the Coast Guard and others to employ in situ burns during the 2010 Deepwater Horizon/BP oil spill in the Gulf of Mexico. (U.S. Coast Guard)

Spill response experts know that all of these methods are effective only when conditions are conducive to using them.

In Situ Burning: When conducted properly, in situ burning significantly reduces the amount of oil on the water and minimizes the adverse effect of oil on the environment.

SMART: Special Monitoring of Applied Response Technologies (SMART) is a cooperatively designed monitoring program for in situ burning and dispersants.

Mechanical Protection Guidelines [PDF, 996.4 KB]: A 1994 manual describing how to deploy booms, barriers, and other mechanical protection devices during a spill response.

FAQ: Microbes and Oil Spills: This report is based on the deliberations of over 20 of the nation’s leading experts who came together for one day to develop clear answers to seven frequently asked questions regarding the role of microbes in an oil spill.