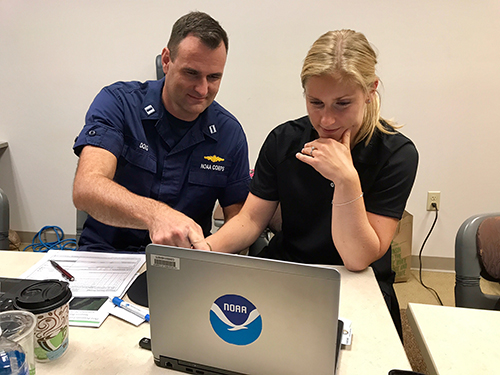 The Incident Command Post and Joint Information Center were established at Sturgeon Bay City Hall and a staging area at George K. Pinney County Park. The event was part of a yearly effort called the Preparedness for Response Exercise Program designed to meet training requirements outlined in the Oil Pollution Act of 1990.

This exercise featured a diverse group of participants in the Environmental Unit and trustees representing the Natural Resource and Damage Assessment process. Annie Gibbs represented NOAA and led the NRDA team for the exercise. She coordinated with other federal and state trustee agencies in attendance including the U.S. Department of the Interior (represented by the U.S. Fish and Wildlife Service) and Wisconsin Department of Natural Rescources. The trustees worked cooperatively with the PRP for the exercise, U.S. Venture, to develop a surface water sampling plan and discussed an approach for a shoreline sampling plan.