Over the past decade, through surveys of opportunity, assessments, and removal actions, NOAA and the U.S. Coast Guard have been slowly working through the list of historic shipwrecks that may pose a pollution threat. Several of the high-profile wrecks have been assessed and successfully remediated, preventing oil from spilling into the environment. The following cases demonstrate the success of collaborations between NOAA, the Coast Guard, and other stakeholders in removing the pollution threats from several of these wrecks. 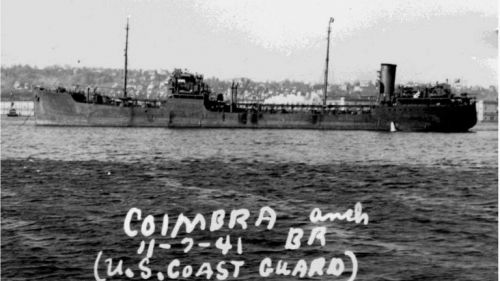 The British tanker Coimbra is seen in this U.S. Coast Guard photo from 1941. Photo Credit: US Coast Guard.

In September of 2015, the Coast Guard received a report of a sheen with a benzene-like odor from the vicinity of an area where previous sheen was documented. In October 2015, the Coast Gurad confirmed the source as the tank barge Argo—a 120-foot barge that sank in Lake Erie in 1937 with 200,000 gallons of crude oil and benzol. The resulting operation was a complex international response involving the Coast Guard, NOAA, Environment Canada, and other partner agencies to assess and remove the pollutants from the sunken barge. After 50 days, approximately 50,000 gallons of remaining contaminants were recovered from the vessel. Although the barge Argo ranked as the highest of five wrecks in the Great Lakes, it was only ranked 39th in the nation overall in NOAA’s 2013 RULET (Remediation of Underwater Legacy Environmental Threats) study.

In June of 2016*, USCG ramped up efforts to further assess and recover oil from the M/V Coimbra. The 422-foot Coimbra was torpedoed and sunk off Long Island, New York on Jan. 15, 1942 by U-boat 123 in the Battle of the Atlantic during WWII. As it plunged to its final resting place approximately 30 miles south of Shinnecock Inlet, it carried with it an estimated 2.7 million gallons of oil. Some of the oil on board spilled or burned immediately following the incident, but an unknown amount remained. Over the years, divers and fishermen reported sheens coming from the site of the Coimbra. NOAA satellite imagery also showed chronic sheens at the wreck location. Assessment work was delayed in July 2018 due to rough seas and then an active hurricane season. In March of 2019, the Coast Guard resumed their assessment. Between May 11-31, 2019, 450,000 gallons of remaining oil were recovered, with operations officially complete in July of 2019. The M/V Coimbra was ranked 15th in the nation overall in NOAA’s 2013 RULET study.

In May of 2019, the Coast Guard Sector Key West, with the assistance of NOAA, monitored the site surrounding a wreck believed to be the tanker Joseph M. Cudahy. Sheening from this wreck was routinely reported by divers and fishermen. The Joseph M. Cudahy was identified in the RULET database as a high-risk pollution source, ranking 13th in the nation in the 2013 RULET study with a discharge potential of approximately 3,500,000 gallons. Satellite imagery analyses by NOAA’s National Environmental Satellite, Data and Information Service indicated a recent increase in sheens at the site and prompted the Coast Guard to seek a detailed assessment of the wreck.

*The year is approximate; observations of discharge from the Coimbra were reported as early as 2009 from the U.S. Coast Guard’s National Response Center. The Coimbra is a particularly well-studied and visited wreck. In 1967, the wreck was investigated as part of the U.S. Coast Guard’s Sunken Tanker Project Report, one of the first studies of the legacy of World War II wrecks in U.S. waters.