This is third in a series of six stories examining the oil spill in 1976 of tanker Argo Merchant resulting in the creation of the Office of Response and Restoration.

Dec. 14, 2016 -- When the Argo Merchant ran aground on Nantucket Shoals off Massachusetts early on Dec. 15, 1976, and spilled nearly 8 million gallons of heavy fuel oil, it became the worst marine oil spill the United States had seen. It also led to the eventual creation of the Office of Response and Restoration (OR&R). 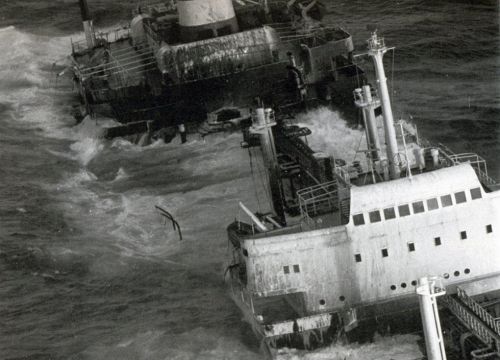 The Argo Merchant was carrying 7.7 million gallons of fuel oil when it went off course and became stuck on Dec. 15, 1976.

In 1974, as work began on the Alaska pipeline, NOAA scientists and academics realized there were important unanswered questions about oil spills.

“How does oil behave in water, that’s what we wanted to know,” recalled Peter Grose, who was then at NOAA’s Environmental Data Services Center in the District of Columbia. “The Environmental Research Lab in Boulder were looking at impacts from Alaskan drilling. We had the simplest models then of how oil moved with wind and waves. Jerry Galt was the modeler in ERL. …. He was kind of leader of the pack.”

"What made me stand out at the moment was I was focusing my work on oil trajectories," Galt said. The Boulder group was looking for a way to study oil spills. It was suggested they go to Santa Barbara, where they could observe natural ocean oil seeps. Galt, along with other interested NOAA researchers, formed the first Spilled Oil Response (SOR) team.

“We were sort of mavericks,” Galt said. “This was all sort of unofficial.”

The team set some ground rules for that first trip, Galt said. All equipment had to fit into a suitcase and ocean flyovers would be from a Cessna 172, the most commonly available rent-a-plane and already certified by Federal Aviation Administration to fly with the doors off. That made it easier for the ream to drop dye into the ocean and photograph how it spread.

After a week in Santa Barbara, according to Galt, “We said well, let’s think about this and what we learned, make some notes and get together after Christmas. … Well, we didn’t make Christmas.”

Word of the Argo Merchant spill spread quickly, and because the loosely formed SOR team (Galt’s colleagues from Boulder and Grose’s in D.C.) had a preliminary oil spill plan, it was decided they would head to Massachusetts.

“We took planes and shuttles to Hyannis,” said Grose. “We wanted to know if the oil stayed together or broke into smaller chunks. Did it absorb into the water column? We wanted to look at weather.”

“We started being obnoxious, asking scientific questions,” Galt said. “I immediately contacted people in Woods Hole and MIT doing oceanography there and we went and talked to the Coast Guard about getting on over-flights.”

At first, the team was not there in an official capacity, but that soon changed.

“We found out a truism of oil spills: If you’re not part of the solution, you’re part of the problem,” said Galt. “So, the Coast Guard said, ‘You want to go out on our airplanes? We need observers. You work for us, all right?’ We said OK and off we went.”

The team rose at dawn to catch the Coast Guard’s flight over the spill, taking photos. For perhaps the first time, divers were enlisted to go under the spill to determine if the oil was getting into the water column. Oil samples were taken. Then the team would convene at a local hotel to analyze the day’s data.

“We learned how to develop film in a hotel room,” Galt said. “I was there for a week to start with and during that week I think I spent 10 hours in bed. … I went home for Christmas dinner and fell asleep at the table, and after I woke up I went back to the spill.”

From HAZMAT to OR&R

In addition to publishing a report in record time, the team’s experiences resulted in the improvement of science equipment and oil-spill-response techniques.

“With Argo Merchant we developed a camera that could record time,” said Grose. “It’s hard to photograph a spill in intervals when you don’t have a timestamp on the photo. That seems like a little thing, but when you come back with 10 rolls of film it ends up being a big thing.”

The experience with the Argo Merchant spill answered some of team’s questions, and showed the need for more spill information, leading to the creations of the Hazardous Materials Response Division (HAZMAT), and finally to the Office of Response and Restoration.

“In the end,” Grose said, “what we learned was how much there was to still learn about oil spills.”