This is second in a series of six stories examining the oil spill in 1976 of tanker Argo Merchant resulting in the creation of the Office of Response and Restoration. 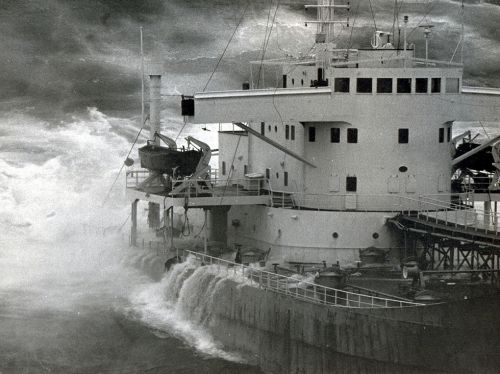 Heavy seas cover the decks of the Argo Merchant while the tanker lies aground near Nantucket Island. Credit: Coast Guard Historian

The sinking of the Titanic led to increased international requirements for lifesaving equipment, and the Exxon Valdez led to double-hull tankers and a host of other safety improvements. The 1976 grounding of the Argo Merchant led to the creation of the Scientific Support Coordinator (SSC) program that today is the backbone of the marine spill response.

The road to the SSC program started with the nation’s first National Contingency Plan (NCP) in 1968, a result of the massive oil 1967 spill from the tanker Torrey Canyon off the coast of the United Kingdom. There was no plan in place to cope with the more than 37 million gallons of crude oil spilled into the water, causing governmental confusion and massive environmental damage.

To avoid the problems the United Kingdom faced by response officials involved in the Torrey Canyon incident, the United States developed a coordinated approach to cope with potential spills in the nation’s waters. The 1968 plan provided the first comprehensive system of accident reporting, spill containment and cleanup. The plan also established a response headquarters, a national reaction team and regional reaction teams (precursors to the current National Response Team and Regional Response Teams).

Filling a gap in science coordination

But that 1968 NCP had some gaps. One was science coordination. The 1976 Argo Merchant spill threatened one of the most productive fishing grounds in the nation, and raised the immediate attention of the high concentration of federal, state and academic science institutions in the region. And those scientists had no shortage of ideas, predictions, and samples they wanted collected as well as studies they wanted to conduct. However, the United States Coast Guard (USCG), the federal agency tasked with responding to spills, had its hands full with the stricken tanker, growing slicks, and mounting public concerns.

Earlier that year, NOAA and USCG had established the Spilled Oil Research (SOR) team to study the effects of oil and gas exploration in Alaska. This team was a network of coastal geologists, marine biologists, chemists, and oceanographers that could go on-scene at “spills of opportunity” with the goal of investigating oil spill impacts and improve oil spill forecasting models.

The Argo Merchant spill was the first major deployment of the SOR Team. After arriving on scene, the Coast Guard quickly asked the SOR Team to act as its scientific adviser and be an informal liaison with the scientific community concerned with the spill.

The coordination was rocky at first, but within a few months of the spill, the NOAA team compiled and published “The Argo Merchant Oil Spill; a Preliminary Scientific Report.” The 200+ page initial report represented the work of over 100 scientists from numerous agencies and institutions:

Several other synthesis reports were published in the following year.

From HAZMAT to the Emergency Response Division

After the Argo Merchant spill, NOAA created the Hazardous Material Response Division (HAZMAT team) to provide scientific expertise during a response incident. Now called the Office of Response and Restoration’s Emergency Response Division, it has grown from a handful of oceanographers, mathematicians, and computer modelers in 1976, into a highly diverse team of chemists, biologists, geologists, information management specialists, and technical and administrative support staff.

The once-informal role of scientific coordination is now formally recognized in the National Oil and Hazardous Substances Pollution Contingency Plan. NOAA has a dozen Scientific Support Coordinators (SSCs) attached to USCG offices around the country. During spills, training, and exercises, the SSC is a direct science advisor to the Federal On-scene Coordinator.

In 2016, the SSC team responded to 178 spills around the country. The SSCs still serve USCG to help protect the public, the environment, and economic interests — in the nation's ports and waterways, along the coast, on international waters, or in any maritime region as required to support national security and help maintain the health and vibrancy of our nation’s oceans and coasts.