This is fourth in a series of six stories examining the oil spill in 1976 of tanker Argo Merchant resulting in the creation of the Office of Response and Restoration. 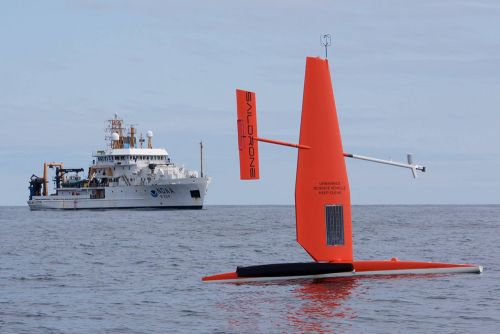 NOAA has deployed the Saildrone to study fisheries in the Bering Sea. (NOAA)

Dec. 15, 2016 -- Earlier stories have described the Argo Merchant oil spill as the catalyst for the creation of the Office of Response and Restoration (OR&R). Its ongoing partnership with the United States Coast Guard (USCG) and other agencies has expanded from scientific support to include the latest developments in spill response technology.

Over the years, OR&R has continued to provide scientific support to the Coast Guard when it responds to oil or chemical spills. On its own, or in partnership with other agencies, OR&R provides software, guidance documents, and training on the scientific aspects of oil and chemical spill response. In addition, OR&R is constantly refining techniques, tools, and training in spill response.

Modeling marine spills: After the Argo Merchant spill, standard methods for assessing marine spills were established, and a series of trajectory and fate modeling programs were created.

In 1979, the On-Scene Spill Model (OSSM) was developed to predict the possible route, or trajectory, a pollutant might follow in, or on, water. In 1999, OSSM became GNOME, General NOAA Operational Modeling Environment program.

The GNOME Online Oceanographic Data Server (GOODS), helps GNOME users access the base maps, ocean currents, and winds needed to run trajectories in their own regions. In addition, OR&R is nearing completion of a multi-year project to produce the next generation of GNOME, which will include integration of ADIOS, a program modeling how different types of oil weather (undergo physical and chemical changes) in the marine environment.

Mapping sensitive shorelines and species: In 1979 Environmental Sensitivity Index (ESI) maps were created after the Ixtoc 1 exploratory oil well blowout. ESIs provide information about coastal shoreline sensitivity, biological species and habitats, and human-use resources. The maps allow spill responders to quickly identify resources at risk before and during an oil spill, in order to establish cleanup methods and priorities.

Providing a Common Operational Picture (COP): Developed after the Deepwater Horizon oil spill in 2010, the online mapping tool ERMA® soon became the COP for the Deepwater Horizon response as well as other spills. ERMA integrates both static and real-time data, such as ESI maps, ship locations, weather, and ocean currents, in a centralized, easy-to-use format for environmental responders and decision makers. ERMA is designed to:

Learn more about the ever-evolving tools and techniques that OR&R uses to respond to environmental spills.

Looking to the Future

Drone technologies to assess shorelines: OR&R is exploring emerging technologies such as drones, or Unmanned Aerial Systems (UASs), for shoreline assessment during spills and exercises, particularly when the shoreline is steep or inaccessible. The UAS imagery can be quickly displayed in the COP for response during a spill, and for a Natural Resource Damage Assessment.

Recently, OR&R teamed up with the California Office of Spill Prevention and Response, USCG, and Chevron Corporation to explore the utility of drones as a reconnaissance tool for shoreline oiling. During an oil spill, the nature and extent of shoreline oiling are usually determined by ground-based surveys using the Shoreline Cleanup Assessment Technique (SCAT). In situations when shorelines cannot be safely accessed or when they include sensitive habitats like marshes, SCAT may be limited to conducting helicopter-based and/or ground-based binocular surveys, or no surveys at all. Emerging technologies like drones may become important elements in future SCAT survey efforts.