Detecting Changes in a Changing World: 25 Years After the Exxon Valdez Oil Spill

MARCH 21, 2014 -- Life between high and low tide along the Alaskan coast is literally rough and tumble. The marine animals and plants living there have to deal with both crashing sea waves at high tide and the drying heat of the sun at low tide. Such a life can be up and down, boom and bust, as favorable conditions come and go quickly and marine animals and plants are forced to react and repopulate just as quickly. But what happens when oil from the tanker Exxon Valdez enters this dynamic picture—and 25 years later, still hasn't completely left? What happens when bigger changes to the ocean and global climate begin arriving in these waters already in flux?

In the 25 years since the Exxon Valdez oil spill hit Alaska’s Prince William Sound, NOAA scientists, including marine biologist Gary Shigenaka and ecologist Alan Mearns, have been studying the impacts of the spill and cleanup measures on these animals and plants in rocky tidal waters. Their experiments and monitoring over the long term revealed a high degree of natural variability in these communities that was unrelated to the oil spill. They saw large changes in, for example, numbers of mussels, seaweeds, and barnacles from year to year even in areas known to be unaffected by the oil spill. This translated into a major challenge. How do scientists tell the difference between shifts in marine communities due to natural variability and those changes caused by the oil spill? Several key themes emerged from NOAA's long-term monitoring and subsequent experimental research:

What NOAA has learned from these themes informs our understanding of oil spill response and cleanup, as well as of ecosystems on a larger scale. None of this, however, would have been apparent without the long-term monitoring effort. This is an important lesson learned from the Exxon Valdez experience: that monitoring and research, often viewed as an unnecessary luxury in the context of a large oil spill response, are useful, even essential, for framing the scientific and practical lessons learned.

Left, this gold-brown seaweed, known as rockweed (Fucus distichus), is abundant on the shorelines of Alaska’s Prince William Sound. Right, a sea snail known as a limpet (Lottia scutum) grazes its way across the seaweed buffet on a rock in the intertidal zone. (NOAA)

As NOAA looks ahead to the future—and with the Gulf of Mexico's Deepwater Horizon oil spill in our recent past—we can incorporate and apply lessons of the Exxon Valdez long-term program into how we will support response decisions and define impact and recovery. The Arctic is a region of intense interest and scrutiny. Climate change is opening previously inaccessible waters and dramatically shifting what scientists previously considered "normal" environmental conditions. This is allowing new oil production and increased maritime traffic through Arctic waters, increasing the risk of oil spills in remote and changing environments. If and when something bad happens in the Arctic, how do scientists determine the impact and what recovery means, if our reference point is a rapidly moving target? What is our model habitat for restoring one area impacted by oil when the "unimpacted" reference areas are undergoing their own major changes? Tracking the progress of recovery for marine life and habitats following the Exxon Valdez oil spill is no easy task. Even today, not all of the species have recovered or we don’t have enough information to know. (NOAA) Click to enlarge.

NOAA marine biologist Gary Shigenaka explores these questions as he reflects on the 25 years since the Exxon Valdez oil spill in the following Making Waves podcast from the National Ocean Service: [NARRATOR] This all points back at what Gary says is the main take-away lesson after 25 years of studying the aftermath of this spill: the natural environment in Alaska and in the Arctic are rapidly changing. If we don't understand that background change, then it's really hard to say if an area has recovered or not after a big oil spill.

[GARY SHIGENAKA] "I think we need to really keep in mind that maybe our prior notions of recovery as returning to some pre-spill or absolute control condition may be outmoded. We need to really overlay that with the dynamic changes that are occurring for whatever reason and adjust our assessments and definitions accordingly. I don't have the answers for the best way to do that. We've gotten some ideas from the work that we've done, but I think that as those changes begin to accelerate and become much more marked, then it's going to be harder to do."

Listen to the full interview with Gary. Read a report by Gary Shigenaka summarizing information about the Exxon Valdez oil spill and response along with NOAA's role and research over the past 25 years. 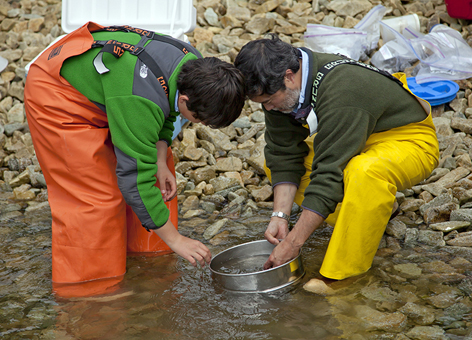 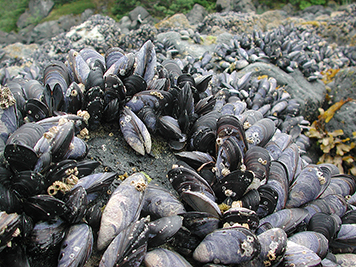 Pacific blue mussels (Mytilus trossulus) line the rocks which are alternately submerged and exposed by the changing tides. (NOAA)
Back to top