The Never-ending History of Life on a Rock 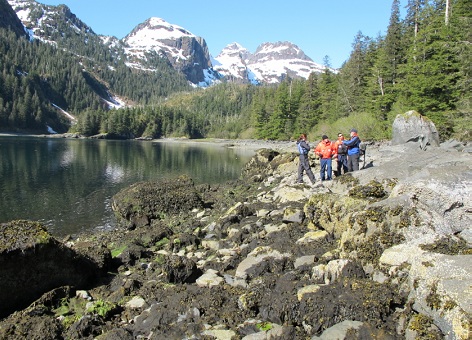 OCTOBER 12, 2012 -- In 1989 when NOAA ecologist Dr. Alan Mearns first caught sight of a certain seaweed-encrusted boulder in Alaska's Prince William Sound, he had little idea he would be visiting that chest-high, relatively nondescript rock year after year ... for the next two decades.

Or that, along the way, the boulder would eventually bear his name: Mearns Rock.

This particular rock—like many others in the southwest corner of the sound—was coated in oil after the tanker Exxon Valdez ran aground on nearby Bligh Reef and flooded the salty waters with nearly 11 million gallons of crude oil in March 1989.

For the next ten years, Mearns and other NOAA biologists examined how marine life in these tidal areas reacted to the Exxon oiling. Some of the rocky areas in their study had been oiled; others had later been cleaned of oil using high-pressure, hot-water hoses, while still others, serving as a "control" or baseline comparison, had been untouched by oil or cleaning efforts—as if the Exxon Valdez had never disemboweled its oily innards at all.

Looking Under a Rock

Over the years, Mearns and his fellow biologists were able to observe [PDF] the many faces of "normal" for this intertidal ecosystem—a dynamic habitat on the edge of land and sea and exposed to the rigors of both. In doing so, they and other scientists found that this ecosystem showed signs of recovery from oiling after about three or four years [PDF].

When the ten-year monitoring study ended, the NOAA team shifted to a smaller-scale, experimental phase of research that continues today. As part of this field-based research, Mearns (or occasionally one of his colleagues) still returns to Mearns Rock and up to eight other rocky sites to record an annual snapshot of the ecological processes there. He has observed the ebb and flow of the mussels, barnacles, and various seaweeds populating these boulders, which are set on sections of beach alternately flooded and drained by the Pacific Ocean's tides.

This collection of annual snapshots adds up to an ecological photo-journal of sorts, while also serving as a much less labor-intensive method of research. By taking the same photograph around the same time each year, Mearns is able to examine and compare the general year-to-year variability of the plants and animals living on Mearns Rock. You can see the progression of these annual changes occurring on Mearns Rock in a photo slideshow. But 24 years into this experiment, Mearns decided it was time for this kind of enduring, localized scientific observation to take on new energy. In January 2012 at the annual Alaska Marine Science Symposium in Anchorage, Alaska, he and Office of Response and Restoration colleague John Whitney presented a poster describing the decades of environmental trends at Mearns Rock.

The two hoped to garner the attention of others interested in turning this annual photo-surveillance of Mearns Rock and the other boulders from the original study—nine in all—into a volunteer-led project.

"It worked," Mearns reported. "Scientists and students stopped by to chat. At one point a half dozen of us gathered at the poster and several offered to visit sites in the summer of 2012."

But science requires consistency: everything needs to be done the exact same way. Mearns pulled together a reference guide for these volunteers, which would direct them to the study sites; tell them precisely where, when, and how to take photos at each location; and provide samples of past photos for comparison.

On an exceptionally clear and calm morning this past June, Mearns, other NOAA scientists, and a couple Coast Guard staff cruised across the waters of Prince William Sound aboard a 30-foot charter vessel. They visited three different locations around the sound, including Mearns Rock.

But unlike in the past, the crew wasn’t alone in their efforts. Mearns and Whitney had successfully recruited volunteers to help photograph the other six study areas in the sound.

In fact, the first volunteer, David Janka, skipper of Auklet Charters in Cordova, Alaska, had already taken photos the month before at three NOAA sampling sites on the northern end of Knight Island, which was heavily oiled during the Exxon Valdez spill. Janka was no stranger to this project; he had taken the annual snapshot of Mearns Rock several times in the past when Mearns was unable to venture out there himself. The locations of intertidal boulders in Dr. Alan Mearns’ study in southwest Prince William Sound, Alaska. The Exxon Valdez oil spill occurred in the northeast corner of the sound (not on map). Key: Yellow sites were oiled and cleaned with high pressure, hot-water washing in 1989. Green sites were oiled but not cleaned in 1989. Blue sites were not oiled in the Exxon Valdez oil spill. Inset: Relative location of Prince William Sound.

First for Mearns and his crew on that June day, however, was stopping at an unoiled rocky site at Eshamy Bay Lodge, near Whittier, Alaska. It had been several years since their team had been able to photograph a site that had escaped the Exxon oiling, and Mearns was anxious to re-establish this one. While there, they worked on recruiting the manager of the nearby lodge to photograph that boulder in the future. Afterwards, they sped off to a second study site and finally to Snug Harbor, location of Mearns Rock.

A few weeks later, Dr. Thomas Dean, a marine biologist from San Diego working in Prince William Sound, joined the effort and, using Mearns’ reference guide, was able to photograph the seventh site, one on Knight Island’s Herring Bay. With only two study sites left to visit in 2012, Dr. Rob Campbell of the Prince William Sound Science Center pitched in to check off the eighth site. While out doing herring surveys, he stopped by the study site in Shelter Bay long enough to snap photos of two boulders the NOAA team had nicknamed "Bert" and "Ernie."

Finally, thanks to a tip from Dr. Campbell, Mearns reached out to Kate McLaughlin, a scientist and educator living in Chenega Bay, a Native village only a mile from the untouched Crab Bay control site on Evans Island. She happily agreed to help, and in July, she and her dog made a couple trips to that corner of Prince William Sound to secure the last photos.

Yet Mearns and his research have managed to inspire an even larger effort which would expand on this type of coastal monitoring in Alaska. John Harper at Coastal and Ocean Resources, Inc. in Victoria, British Columbia, is leading an initiative to engage citizen scientists around the Gulf of Alaska.

One of the goals of this initiative, known as the Three Amigos Intertidal Sampling Program, is "to collect information on the condition of rocky intertidal communities and changes that occur over time." Supported by the Oil Spill Recovery Institute, Harper and his colleagues in this endeavor are developing a protocol and model for community-based environmental monitoring and admitted that their proposed approach for this program is inspired directly by Mearns Rock—an exciting legacy for an otherwise average boulder patiently setting at the ocean's edge, year after year.