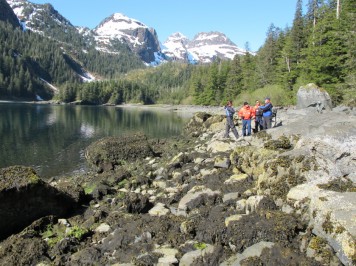 How does marine life recover from a major, one-time stress, such as an oil spill?

In an attempt to understand the answer, NOAA scientists began a long-term study of "Mearns Rock," a large boulder that was oiled but not cleaned during the Exxon Valdez oil spill in March 1989. The boulder is located on rocky shoreline in the intertidal zone at Snug Harbor on Knight Island, Prince William Sound, Alaska.

NOAA biologists have been photographing this boulder—and the animals and plants growing on it—each year (in late June or early July) since 1990. They concluded that after three to four years, the intertidal marine life had recovered within the range of natural variation. However, they are continuing the photographic survey of Mearns Rock to explore further this dynamic variation in ecosystems.

Along with Mearns Rock, they have been monitoring conspicuous shoreline features at other non-oiled and oiled-and-cleaned locations from the Exxon Valdez spill. (Note that we have not yet provided photos of a "control" site, a boulder on a similar shoreline that was not oiled to compare with Mearns Rock.)

View our photo gallery of Mearns Rock and watch its ecological recovery from the 1989 Exxon Valdez oil spill.

The Never-ending History of Life on a Rock: Learn more about the back story and the future of the Mearns Rock project, which includes an unexpected legacy for citizen science in Alaska.

The Exxon Valdez Oil Spill of 1989: From Environmental Infamy to a Sound Legacy: NOAA OR&R's 20th annual survey of Prince William Sound, Alaska, reveals "The Year of the Mussel" and other interesting trends from Mearns Rock.

Prince William's Oily Mess: A Tale of Recovery: Check out a case study in the Exxon Valdez oil spill, accompanied by a set of supporting resources, including student and teacher guides, an interactive quiz, an exercise with real data, and an interview with National Ocean Service scientist, Dr. Alan Mearns.

Seaweeds of Alaska: This searchable database contains photos and when available, detailed life histories for many seaweed species found in Alaska.