Remembering the Exxon Valdez: Collecting 25 Years of Memories and Memorabilia

It had been two months since the tanker Exxon Valdez, now tied up for repairs nearby, had run aground and spilled nearly 11 million gallons of crude oil into the waters the Fairweather was now sailing through.

That day Shigenaka and the other NOAA scientists aboard the Fairweather were collecting data about the status of fish after the oil spill. Little did he know he would be collecting something else too: a little piece of history that would inspire his 25-year-long collection of curiosities related to the Exxon Valdez.

Shigenaka's collection of items would eventually grow to include everything from tourist trinkets poking fun at the spill to safety award memorabilia given to the tanker's crew years before it grounded.

This unusual collection's first item came to Shigenaka back on that May day in 1989, when the NOAA scientists on their ship were flagged down by the crippled tanker's salvage crew. Come here, they said. We think you're going to want to see this.

Apparently, while the salvage crew was busy making repairs to the damaged Exxon Valdez, they had noticed big schools of fish swimming in and out of the holes in the ship. So Shigenaka and a few others went aboard the Exxon Valdez, putting a small boat inside the flooded cargo holds and throwing their nets into the waters. They were unsuccessful at catching the fish moving in and out of the ship, but Shigenaka and the other NOAA scientists didn't leave the infamous tanker empty-handed.

They noticed that the salvage workers who had initially invited them on board were cutting away steel frames hanging off of the ship. Naturally, they asked if they could have one of the steel frames, which they had cut into pieces a few inches long so that each of these fish-counting scientists could take home a piece of the Exxon Valdez.

After Shigenaka took this nondescript chunk of steel back home to Seattle, Wash., he heard rumors about the existence of another item that piqued his interest. The Exxon Shipping Company had allegedly produced safety calendars which featured the previously exemplary tanker Exxon Valdez during the very month that it would cause the largest oil spill in U.S. waters at the time—March 1989. Feeling a bit like Moby Dick's Captain Ahab chasing down a mythical white whale, Shigenaka's efforts were finally rewarded when he saw one of these calendars pop up on eBay. He bought it. And that was just the beginning.

This young biologist who began his career in oil spill response with the fateful Exxon Valdez spill would find both his professional and personal life shaped by this monumental spill. Today, Shigenaka has an alert set up so that he is notified when anything related to the Exxon Valdez shows up on eBay. He will occasionally bid when something catches his eye, mostly rarer items from the days before the oil spill.

To commemorate the 25 years since the Exxon Valdez oil spill, take a peek at what is in Gary Shigenaka's personal collection of Exxon Valdez artifacts. The rusted and nondescript piece of steel on the left was a piece of the tanker Exxon Valdez, recovered by the salvage crew in 1989 and given to NOAA marine biologist Gary Shigenaka. It was the beginning of his collection of Exxon Valdez artifacts and remains the item with the biggest personal value to him. The piece of metal on the right, inscribed with “On the rocks,” is also metal from the ship but was purchased on eBay. (NOAA) This belt buckle commemorates a safety and performance award from 1987 for the Exxon Valdez. It was likely given to a member of its crew. (NOAA) A high ball glass engraved with the image and name of the tanker Exxon Valdez along with the date September 20, 1986, the year the ship was first launched and potentially the date of its christening. (NOAA) The autograph of Joseph Hazelwood, captain of the tanker Exxon Valdez when it ran aground. Someone in Cordova, Alaska, perhaps a stamp collector, got his autograph on a commemorative James Cook envelope with a 'First Day of Issue' stamp featuring Captain Cook. (NOAA) The local newspaper in Valdez, Alaska, first reports on the Exxon Valdez’s grounding and oil spill on March 24, 1989. (NOAA) A jar of oil from the Exxon Valdez oil spill which was gathered from a beach in Alaska. After the spill, people nearby would collect vials of the oil and sell them in tourist shops. (NOAA) Dr. Bob Clark, chief scientist of the NOAA fisheries damage assessment for the Exxon Valdez oil spill, had rubber stamps created for each of the vessels and helicopters working the spill response, as well as for NOAA. (NOAA) 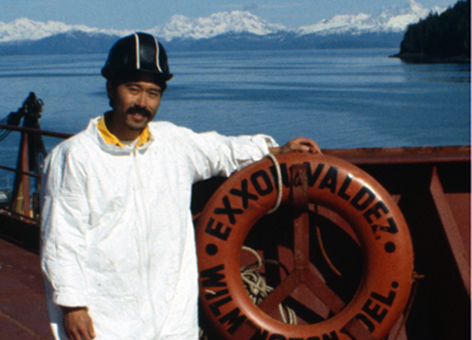 NOAA marine biologist Gary Shigenaka in 1989 aboard the tanker Exxon Valdez itself. In retrospect, Shigenaka joked that he should have made off with the ship's life preserver for his eventual collection of artifacts related to the ship and spill. (NOAA) 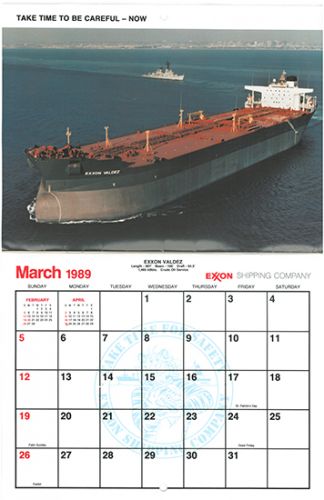 In an ironic twist of fate, the Exxon Shipping Company’s safety calendar featured the tanker Exxon Valdez in March 1989, the same month the ship ran aground. Image: From the collection of Gary Shigenaka.
Back to top