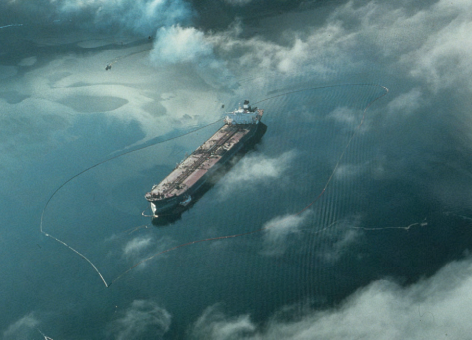 NOAA's Office of Response and Restoration (OR&R) remembers the fateful spill, its devastating impacts, and the many challenges that the spill response presented—geographic remoteness, rugged shorelines, severe weather, sensitive habitats, and threatened commercial and subsistence fisheries.

OR&R's new report, Twenty-Five Years After the Exxon Valdez Oil Spill, describes the accident, the multi-agency response, and the catastrophic toll that this spill had on the Alaskan environment.

Authored by NOAA marine biologist Gary Shigenaka, the report revisits the details of the spill, tells the story of NOAA's role in spill response from its beginnings in the mid-1970s, and then explains how the two came together during the Exxon Valdez oil spill in a technical effort that would span a quarter century and outlive the ship itself.

The early spill response support that NOAA provided in 1989 includes the same general products and services that it offers today—although the current versions boast advanced scientific underpinnings. These included:

As the spill and its response grew in magnitude and complexity, NOAA worked with other government agencies to provide technical expertise on a broad range of issues, such as:

During the first year of the response, aggressive shoreline cleanup included the widespread use of high-pressure hot water to remove persistent oil from the beaches. Recognizing that the use of methods like this might itself inflict harm to treated intertidal communities independent of that from oil, NOAA began a decade-long shoreline monitoring program that yielded a number of insights into oil and cleanup impacts and the nature of recovery on the intertidal shorelines of Prince William Sound.

Although the early results of the monitoring confirmed that aggressive cleanup did inflict a greater degree of impact on shoreline communities than oil alone, the affected organisms appeared to compensate for the deficit within a two- to three-year period. Within three to six years, biological communities on oiled shorelines were comparable to those on unoiled reference beaches. Life in the intertidal zone is literally rough and tumble, and the organisms that favor that niche have life cycles and employ reproductive and competitive strategies that can quickly repopulate disturbed areas—such as those caused by oil spills and cleanup.

However, monitoring over the long term revealed a high degree of natural variability in intertidal communities that was unrelated to the oil spill, as large changes were documented from year to year even at those sites known to have been unaffected by the oil spill. This translated into a substantial monitoring challenge: i.e., distinguishing between shifts in biological communities attributable to inherent natural variability from changes caused by the spill. How the NOAA research team accomplished this is explained in the report.

After a decade, NOAA's long-term monitoring program wound down and the scientific team transitioned to a set of experimental investigations focusing on questions that arose from the 10 years of study of Exxon Valdez shoreline impacts. For example: Would an intense pulse of disturbance like an oil spill and cleanup set in motion a series of successional "waves" in the biological communities that would recede only slowly with time? Would aggressive cleanup on a gravel beach physically alter the habitat to the extent that biological recovery would be delayed?

In 1999 and 2000, two experiments were launched in Kasitsna Bay (Cook Inlet) and Lower Herring Bay (Prince William Sound) to specifically address these questions. The answers would both match anticipated outcomes—and surprise us. The experiments and their results are summarized in the 25-year report.

The themes that emerged from NOAA's long-term monitoring and the subsequent experimental research were the following:

None of this, however, would have been apparent in the absence of the long-term monitoring effort. This in itself is an important lesson learned from the Exxon Valdez experience: that monitoring and research, often viewed as an unnecessary luxury in the context of a large spill response, are useful, even essential, for framing the scientific and practical lessons learned.

Implications for the Present and Future

As we look forward, to the future, and with the Deepwater Horizon experience in our recent past, we can incorporate and apply lessons of the Exxon Valdez long-term program into how we will support response decisions and define impact and recovery.

The Arctic is a region of intense interest and scrutiny as oil production becomes a reality, and climate change opens previously inaccessible waters and dramatically shifts baselines of environmental normality there. If and when something bad happens, how do we discern the impact and determine what recovery means, if our reference point is a rapidly moving target? To what do we restore an impacted habitat when the unimpacted reference ... is not?

In a sad and somehow fitting footnote to the recounting of the science and monitoring that have transpired over the last 25 years, and why it is still relevant to the future of oil spill response and assessment, the tale of the fate of the Exxon Valdez, the tanker itself, is provided as the coda to the story.

Exxon Valdez Oil Spill: Find all of our information and stories on the grounding, spill, response, and research in the wake of the 1989 Exxon Valdez oil spill.

Timeline of Recovery: Take a look at this infographic to see if and when nearly 30 types of fish, wildlife, and habitats have recovered in the 25 years after this monumental spill.