High Water and Sunken Oil on the Great Mississippi 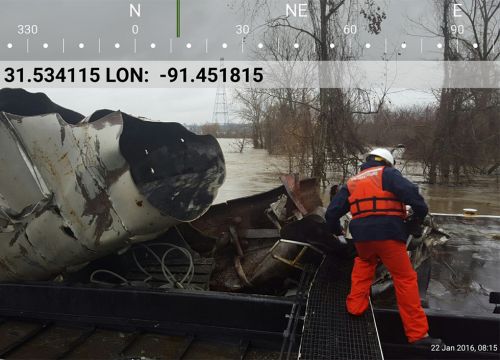 That’s the situation emergency responders faced in two oil spills on the Mississippi River that challenged their understanding of how to approach evaluating oil spill conditions.

In both instances, the U.S. Coast Guard requested assistance from the National Oceanic and Atmospheric Administration. NOAA’s Office of Response and Restoration has scientific support coordinators stationed throughout the country to respond to spill emergencies.

The two incidents also spilled slurry oil—a byproduct of the oil refining process, which is denser than water and so, sinks instead of floating on the water’s surface. Despite understanding the scientific attributes of the oil, the responders needed to know where it was and how it would react to the river’s high water conditions.

“Just because you know the physical properties doesn’t tell you it will stay in one piece or get torn to bits and scattered all over the river bottom,” said Adam Davis, NOAA scientific support coordinator in the Gulf of Mexico who responded to both spills. “What we didn’t know was how it would interact with the river bottom and whether the best practice assessment tools would work given the river conditions at the time.”

In other words, would the oil sink and go straight to the bottom as one coherent mass or, would the currents tear it into pieces and take it downstream over a larger area? Or, would the oil be rapidly buried and evade the ability to locate and recover it? 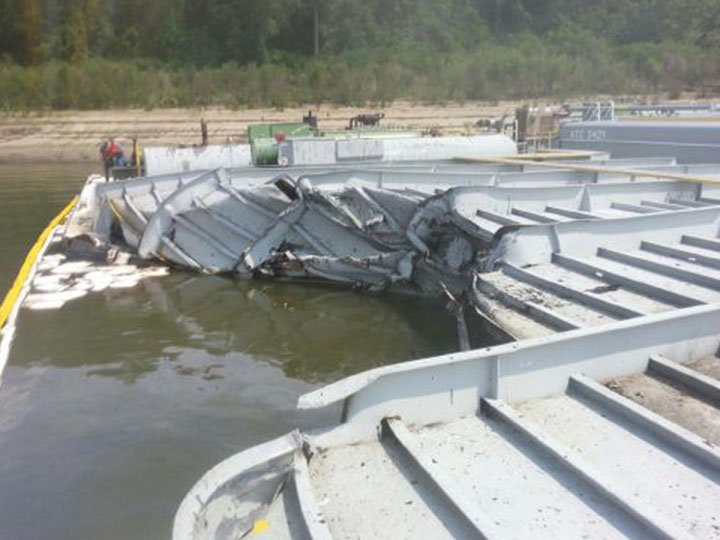 A view of the damaged barge Apex 3508, whose tug boat collided with another on Sept. 2, 2015, causing an oil spill on the Mississippi River near Columbus, Kentucky. The rest of the oil on board the barge was removed. Credit: U.S. Coast Guard

Locating sunken oil in a large, dynamic river like the Lower Mississippi can be daunting. Fortunately, In the case of the Apex 3508 barge collision in Kentucky, the response team was able to use sophisticated side scan sonar and multibeam sonar to locate the oil and map the river bottom. Additionally, a novel dredging technique using an environmental clamshell-dredging device proved effective in recovery.

By the time of the Natchez Bridge incident, the river had moved from its low water condition typical of late summer to the extreme high water associated with seasonal spring flooding. Measurements showed the river raged from 8-13 knots (9-14 miles per hour) and was discharging about 1.8 million cubic feet of water per second. The response team again used side scan and multibeam sonar, but in this instance more to understand how the high flow conditions would affect what was going on along the river bottom. The multibeam imagery showed 30-50 foot tall sand waves were moving along the river bottom at a rate of about 30 feet in about two hours.

“Given the immense amount of sediment being transported rapidly downstream as evidenced by the multibeam imagery, we immediately knew that any oil that had found its way to the bottom near mid channel had been rapidly buried by the next massive sand wave and was unlikely to be recovered any time soon,” Davis said.

When the river is moving swiftly, the safest place for a damaged barge that can't be transported to a fixed facility is often along the riverbank. The problem with a leaking barge pushed in along a flooded riverbank is that it is hard and often dangerous to assess the leakage. This was certainly the case in the Natchez incident.

"We knew the side scan and multibeam tools simply wouldn't work well up close to the barge, Davis said. “There was just too much interference caused by the barge and the flooded trees along the bank to be able to see what was going on.”

The typical snare drag or probing for oil would not work in the high water conditions either. The equipment would snag on debris and vegetation below the water’s surface, and operating a vessel in a flooded tree line was unsafe. 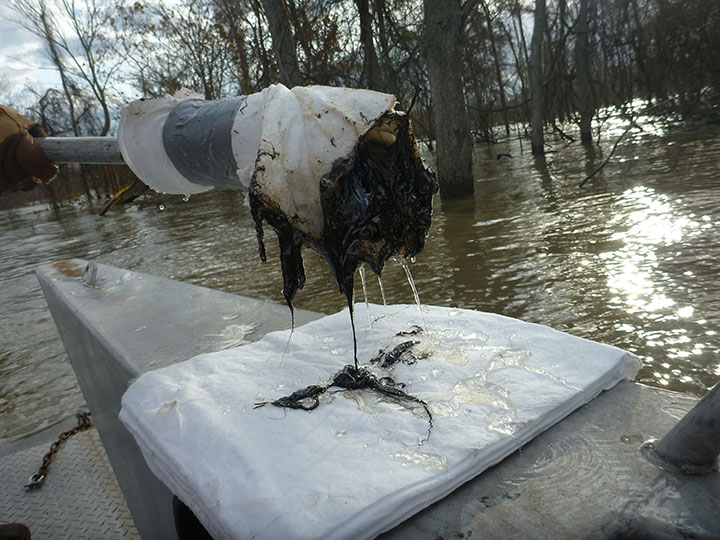 The makeshift “cotton swab” tool created to collect oil samples from the submerged trees along the flooded riverbank during the response to the Amy Frances incident. Credit: NOAA

“In order to probe we needed an object that could be easily and quickly fabricated from items on-hand,” Davis said. “The right tool didn’t exist, the solution called for a little ingenuity and quick action.”

With the barge pushed in to the bank, securely tied off, and under the control of the tow, it offered a stable and safe enough platform for the response team to take a long pole with its ends wrapped in sorbent material and probe along the shore side. The new tool looked like a giant cotton swab and proved effective in quickly confirming the presence of sunken oil along the bank. “Often I find that people are quite surprised that oil spill response strategies can be pretty low-tech sometimes and still be effective,” Davis said. “In the ‘NCIS’ age of ‘isn’t there a high tech gadget that can just easily fix your complex and dynamic problem’? Sometimes it is hard to convey that to people.”

Despite standards for evaluating oil spills, every spill has its unique challenges that require a deep understanding of science and an ability to think creatively.