JUNE 1, 2021 — During the week of May 23, 2021, OR&R scientists participated in 3 half-day meetings with the Brazilian Ministry of Science, Technology, and Innovation (MCTI), NOAA Oceanic and Atmospheric Research (OAR), National Environmental Satellite, Data, and Information Service (NESDIS), and the broader academic community in the U.S. and Brazil, on shared oil spill response and restoration goals. 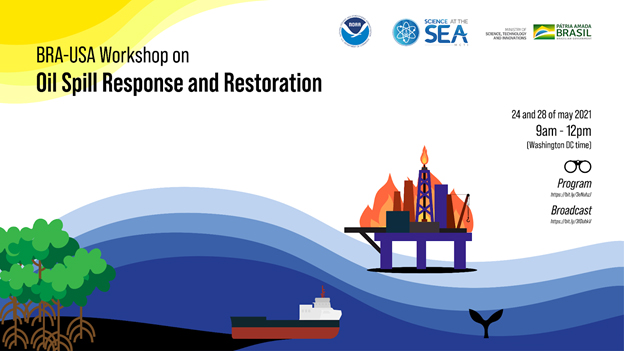 The virtual workshop was organized around four themes and a mix of plenary and breakout sessions: 1) Modelling and forecasting of oil dispersion and control strategy; 2) Biotechnology related to response and mitigation of oil spills; 3) Monitoring and assessment of effects of oil on ecosystems, organisms and humans; and 4) Socioeconomic impacts, communication, science dissemination, and citizen science.  The full agenda can be found here:  http://ciencianomar.mctic.gov.br/acoes/oficina-brasil-estados-unidos-pesquisa-sobre-oleo-no-mar/

The workshop was an outcome of a large mystery spill that affected more than 2000 kilometers of the Brazilian coastline in 2019.  The source of that spill has yet to be identified.  During the workshop, OR&R scientists shared their lessons learned during the 2010 Deepwater Horizon spill and the broader NOAA spill response program.  At the close of the meeting, a joint statement between NOAA and MCTI was announced to strengthen collaboration on oil spill science, including a potential in-person meeting in Brazil.