March 15, 2021 — Scientists from OR&R worked with partners to develop and field test the drifting exposure and effects assessment ring (DEEAR), an in situ bioassay system designed to assess the toxicity of oil spills to aquatic organisms. The DEEAR unit is a drifter drogue with a GPS float that has a bioassay system suspended inside it, where organisms contained in chambers are exposed to ambient water. The unit also contains an array of water quality sensors, a fluorometer, and polyethylene passive sampling devices to characterize the oil exposure. 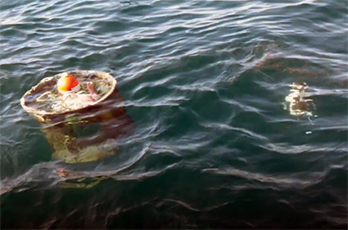 In a 2019 pilot study, DEEAR units were deployed for 24 hours under surface slicks at a natural oil seep site off the coast of Santa Barbara, California. An aerial drone provided tracking of the surface oil and a remote operated underwater vehicle collected water samples and imagery. System functionality, oil exposure, and toxic effects in invertebrate and early life stage fish test organisms were evaluated. Oil exposures were directly linked to toxic responses in organisms, demonstrating that the DEEAR is a promising tool for determining in situ oil exposure and toxicity at aquatic sites. An OR&R Research Profile of this project was previously published. OR&R scientists are co-authors on a manuscript that was just published in Environmental Toxicology and Chemistry, describing the results of the pilot study.