APRIL 11, 2022 — On Dec. 1, 2021, the day after the official end of the Atlantic hurricane season, the Disaster Preparedness Program kicked off continuous improvement efforts to prepare for the 2022 season.

Every year, the DPP leads the National Ocean Service Incident Management Team through a hot wash review following hurricane season. A hot wash is an opportunity for staff to come together to discuss what went well, what could be improved, and what lessons were learned throughout the season. These discussions are collected and synthesized into the after-action report. 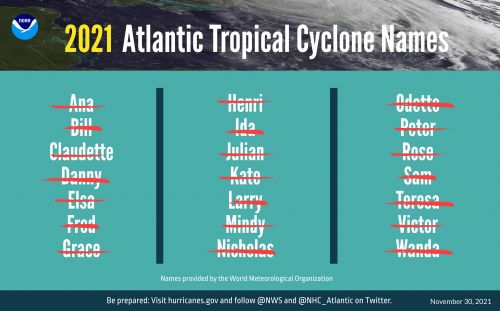 Last year was the third most active year on record in terms of named storms, and it marked the sixth consecutive above-average Atlantic hurricane season. It was also the first time on record that two consecutive hurricane seasons exhausted the list of 21 storm names. The storm that had the greatest impact on the U.S. in 2021 was Hurricane Ida. Ida made landfall on the Louisiana coast as a Category 4 major hurricane and caused the loss of dozens of lives and billions of dollars in damages. The remnants of Ida remained strong enough to claim more lives in the Northeastern U.S. and was the costliest storm to affect that region since Hurricane Sandy.

The 2021 NOS Hurricane Season After-Action Report is designed to relay key findings and establish action items to complete prior to the next hurricane season. In total, seven action items were identified for improvement in order to increase resilience, build capacity, and streamline NOS IMT efforts in preparation for the 2022 hurricane season which will begin on June 1. The NOS 2021 Hurricane Season After-Action Report is specifically focused on NOS disaster operations and is intended for internal use only.