SEPTEMBER 22, 2017--NOAA's Office of Response and Restoration (OR&R) is providing scientific support and assessment of pollution in the aftermath of Hurricanes Irma and Maria. 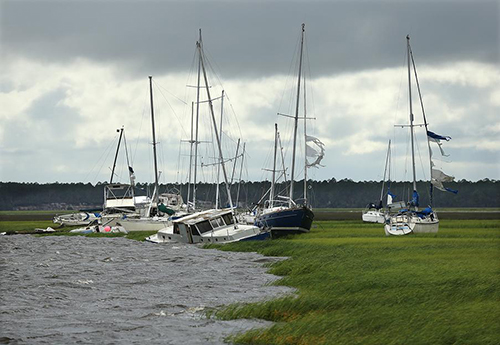 OR&R also has had staff working at FEMA headquarters in Washington, D.C. for agency level coordination support and the State Emergency Operations Center in Tallahassee, Florida.

ERMA®, the NOAA Environmental Response Management Application, is an online mapping tool that integrates both static and real-time data. It provides a common operational picture of events for the USCG, NOAA, and other responders. Aerial imagery from NOAA National Geodetic Survey (NGS) flight missions over the affected areas is being added to ERMA Gulf of Mexico and Caribbean ERMA as soon as it is available.

The NOAA Marine Debris Program is supporting recovery efforts by coordinating information being collected on marine debris, including that of grounded or sunk vessels, orphan containers, household hazardous waste, and general structural debris. OR&R is updating the NGS aerial images with vessel and debris identification data, then adding to ERMA. These maps are now complete for the Florida Keys, with Miami-Dade County and USVI survey analyses in progress.