Over 62,000 Gallons of Oil Removed from WWII Tanker Near New York

MAY 20, 2019 — Oil removal operations continue on the sunken World War II tanker near Long Island, New York that the U.S. Coast Guard confirmed to be leaking during an underwater assessment last month. More than 62,000 gallons of oil has been removed from the tanks of the Coimbra since pumping operations began on May 11, 2019. 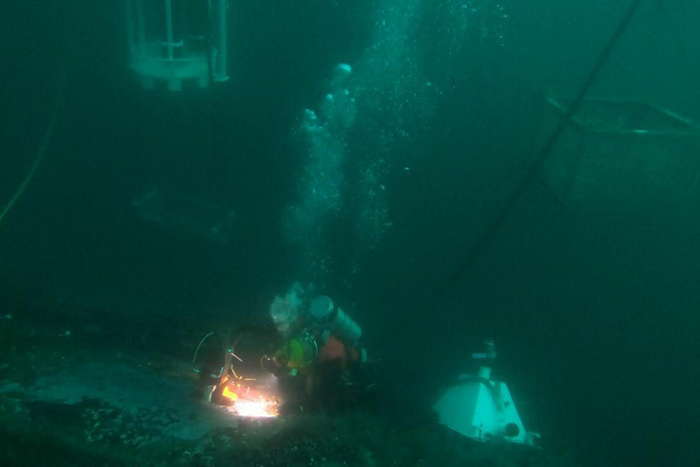 Divers securely drill into and access the oil tanks of the wreck of the British-flagged tanker Coimbra, May 8, 2019. The Coimbra was a supply ship owned by Great Britain when the ship was sunk off the coast of Long Island, during World War II by a German U-boat. Image credit: U.S. Coast Guard.

The Coimbra was a British supply ship during WWII that was torpedoed and sunk by a German U-boat in the Battle of the Atlantic. The vessel now sits 180 feet below the surface about 30 miles off the coast of Shinnecock, New York. The Coimbra went down carrying 2.7 million gallons of oil. In 2015, NOAA’s National Environmental Satellite Data and Information Service (NESDIS) discovered abnormalities at the wreck site that appeared to be an oil sheen.

Oil sheens have been reported at the site with growing frequency. The Coast Guard determined that the Coimbra posed a substantial threat to the environment and opened the Oil Spill Liability Trust Fund for an underwater assessment.

Deep-water divers continue to drill into the ship using a process called hot tapping in order to extract oil samples and determine the best removal process. Initial dive operations began earlier this month and will continue over the next few weeks until all the recoverable oil is removed and the tanker no longer poses an environmental threat.

“There are a lot of moving parts to this one operation in order to safely remove the oil product in the tanks that far below the surface,” said Cmdr. Keith Donohue, the on-scene federal incident commander, in a Coast Guard press release. “Each person aboard the Shelia Bordelon has a very specific role to play in these daily movements, whether it is a diver working on the wreck itself, to the dive supervisors keeping a close eye on his particular diver, to the those working with the salvaged piece of hull so that we can determine the best way to drill into the tanks, extract the oil and have as minimal impact on the maritime environment as possible.”

OR&R's Steve Lehmann is providing scientific support to the mission from the region. OR&R’s Emergency Response Division continues to provide trajectories in case a spill should occur during the operation.

Divers involved in the tanker Coimbra wreck operations access one of the tanks on the ship in an effort to determine if there is any recoverable oil, May 10, 2019. The U.S. Coast Guard has contracted Resolve Marine Group to conduct a full assessment of oil remaining on the Coimbra wreck, located approximately 30 miles southeast of Shinnecock, N.Y. If substantial oil still remains, and if feasible, the Coast Guard will work with Resolve Marine Group to remove oil from the wreck in order to reduce pollution risks to the environment. The Coimbra, a British-flagged supply ship, sunk off the coast of Long Island in January 1942 when a German U-boat torpedoed it. Video credit: U.S. Coast Guard.