Preparing for Anything: What to Do When a Hypothetical Ferry Disaster Overlaps with a National Presidential Convention


This is a post by NOAA Scientific Support Coordinator Frank Csulak.

AUGUST 3, 2016 -- When you're in the business of emergency response, you need to be prepared for all kinds of disasters and all kinds of scenarios.

Being a NOAA Scientific Support Coordinator, the disaster scenarios I'm usually involved with have some connection to the coast or major U.S. waterways.

And being ready for a disaster means practicing pretty much exactly what you would do during an emergency response, even if it's for a relatively unlikely scenario, such as a catastrophic ferry explosion, collision, and oil spill during a major political party convention.

What follows is the hypothetical scenario that a team of federal and state emergency responders walked through at a training workshop from June 12–14, 2016 in Philadelphia, Pennsylvania. U.S Coast Guard Sector Delaware Bay hosted this practice scenario in anticipation of the Democratic National Convention, which occurred (thankfully without any major security incidents) in Philadelphia at the end of July. The team involved was comprised of members from the U.S. Secret Service, Federal Bureau of Investigation, New Jersey and Pennsylvania state police, U.S. Coast Guard, and NOAA.

Ready for Anything You Can Imagine (And This Is Imagined)


Exercise scenario: It is the first day of the Democratic National Convention, which is taking place in Philadelphia, Pennsylvania. Tens of thousands of people, including hundreds of elected officials and the Democratic Party's presumptive presidential candidate, are just arriving at the event.

The Secret Service reports that VIPs continue to land at Philadelphia International Airport. Security is tight. A large safety perimeter has been established around the convention center, with surrounding streets and highways closed to all traffic and thousands of law enforcement officers posted at strategic locations throughout the city.

Meanwhile, the RiverLink Ferry is making the 2:00 p.m. trip from Philadelphia to Camden, New Jersey. There are 21 passengers and two crew members on board. The ferry is crossing the federal channel of the Delaware River when an explosion of unknown cause erupts from the ferry's engine room. The explosion causes the vessel to lose propulsion and steering. It begins listing to the starboard side and drifting down the Delaware River. Smoke can be seen billowing from vents and openings.

Simultaneously, the tug The Caribbean Sea II is pushing the barge The Resource II upriver. The barge attempted to avoid the distressed ferry but is unsuccessful, striking the ferry and causing significant structural damage to both vessels. 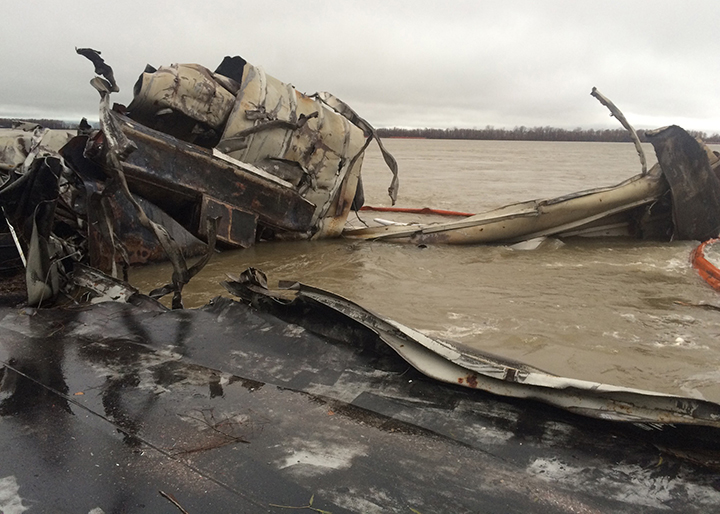 A damaged barge which caused an oil spill on the Mississippi River in early 2016. Responders need to prepare for all kinds of maritime disasters. (U.S. Coast Guard)


Numerous ferry passengers are thrown onto the deck or into the river; others begin jumping into the water. Responders from the U.S. Coast Guard, New Jersey State Police Marine Services Bureau, and the marine units of the Philadelphia Fire and Police Departments all rushed to the scene. Already, they encounter both seriously injured survivors and casualties as far as 200 yards down river of the vessels.

Rescue boats pick up eight survivors from the water and begin offloading them at Penn's Landing Marina. Responders continue to evacuate people from the sinking ferry until it slips completely under water in the vicinity of the Penn's Landing helicopter port. A total of 14 people are rescued and three bodies recovered, some found as far as a quarter mile down river. Six people remain missing.

Thankfully, no injuries are reported among the tugboat's four person crew. However, one of the two crewmembers on the barge, a 60-year-old male, has fallen and broken his arm. He appears to be going into shock and needs to be evacuated.

As a result of the collision, the tug only has partial steering capabilities but continues to push the barge several hundred yards up river, where it drops anchor. The two damaged vessels remain in the river channel, and as responders assess the vessels' conditions, they uncover that the barge is leaking oil. Manhole-sized bubbles of oil are burping to the water's surface, coming from the port side damage below the water line. Oil appears to be leaking from a tank which is holding 5,000 barrels of oil. In all, the barge is carrying 50,000 barrels of heavy bunker fuel oil.


Three damaged vessels. People injured, dead, and missing. A potentially large oil spill on a busy river. First responders diverted from a high-security national event to a local aquatic incident In other words, quite a hypothetical mess. Was the explosion on the ferry due to terrorism? Was it due to human error? Or was it due to a mechanical malfunction in the engine room? We had to imagine how we would deal with these many complicated issues in the heat of the moment.

As a member of the local Coast Guard's response team during this exercise, I helped with many key decisions and procedures and with establishing priorities for response. I acted as a member of what's known in the emergency response community as the "Unified Command," or the established hierarchy of agencies and organizations responding to an emergency, such as an oil spill or hurricane. 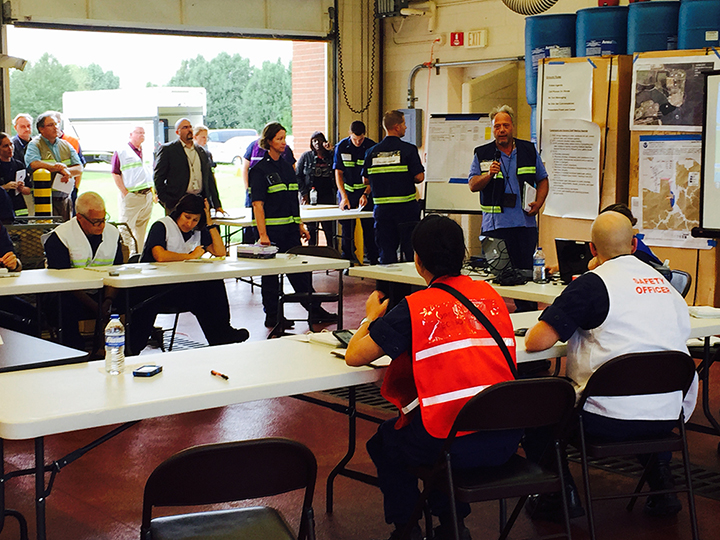 
In this scenario, I was specifically charged with commanding, coordinating, and managing the oil spill response, which is my specialty. I started by identifying and obtaining resources to support the spill response and cleanup and conducting an assessment of natural resources at risk from the oil. Meanwhile, I coordinated with my NOAA support team of scientists back in Seattle, Washington, to provide information on local weather conditions, tides, oil trajectory forecasts, and modeling of the oil’s fate and effects.

In addition, I had to coordinate a variety of notifications and consultations required under the Endangered Species Act, the Essential Fish Habitat provision of the Magnuson-Stevens Act, and the National Historic Preservation Act, which protects historical and archaeological sites.

As you can see, my role during a disaster like this hypothetical one is far-reaching. And that's not even everything. I also helped protect nearby wetlands and other environmentally sensitive areas from the thick, spreading oil; prioritized which areas needed protective booming to prevent contact with oil; and led the response's environmental team, which had representatives from the U.S. Fish and Wildlife Service, Delaware, Pennsylvania, New Jersey, and the U.S. Coast Guard. Of course, all of this was an exercise and there was no ferry incident and no oil spill.

During the actual Democratic National Convention, which took place July 25–29, 2016, I was ready and waiting for any call for help from Coast Guard Sector Delaware Bay. I'm pleased to report that it never came, but if it did, I'd know what to do.

The Coast Guard provided maritime security and monitored potential situations along the Lake Erie shoreline and the Cuyahoga River during the convention. ERMA allowed Coast Guard leadership and others in the command post to access near real-time data, such as locations of field teams and tracked vessels, as well as other agency data such as Department of Homeland Security safety zones, infrastructure status, and protest locations. This gave them a comprehensive picture of the Coast Guard's efforts and the ability to assess potential issues from any location. 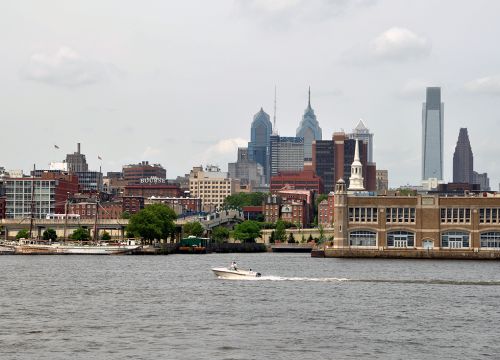 In June 2016, team of federal and state emergency responders practiced responding to a hypothetical ferry disaster and oil spill scenario in anticipation of the Democratic National Convention, which occurred in Philadelphia at the end of July. (Credit: Kevin Harber, CC BY-NC-ND 2.0)
Back to top