JULY 28, 2016 -- What do remotely controlled surfboards have to do with oil spills? In the future, hopefully a lot more.

These "remotely controlled surfboards" are actually wave gliders, small autonomous robots that travel at the ocean surface via wave energy, collecting oceanographic data. Solar panels on top of the gliders power the oceanographic sensors, which transmit the data back to us via satellites.

NOAA's LTJG Rachel Pryor, Northwest Regional Response Officer for the Office of Response and Restoration, recently learned how to use the software that (through the internet) remotely drives these wave gliders—and then actually started "driving" them out in the open ocean.


On July 7, 2016, NOAA launched two wave gliders off the NOAA Ship Oscar Dyson to study ocean acidification through carbon analysis in the Bering Sea (which is off the southwest coast of Alaska).

Left, one of the wave gliders recently deployed in the Bering Sea, with its solar panels on top powering the sensors. Right, a view of the software used to track and pilot the wave gliders. The white cross is wave glider #1 and it is headed east. The orange cross marks show where it has been. The white star is wave glider #2, which is headed west, with the red stars showing where it has been. The blue lines indicate the vectors of where they will be and the direction they are headed. Wave glider #1 rounded the western portion of its path significantly faster than the other glider. As a result, the pilot rounded glider #2 to start heading east to catch up with glider #2. (NOAA)

One wave glider has "Conductivity Temperature Depth" (CTD) sensors, a fluorometer, water temperature sensors, and a meteorological sensor package that measures wind, temperature, and atmospheric pressure. The other glider has a sensor that measures the partial pressure of carbon (which basically tells us how much carbon dioxide the ocean is absorbing), an oxygen sensor, a CTD, pH instrumentation, and a meteorological package. The pair of gliders is following a long loop around the 60⁰N latitude line, with each leg of the loop about 200 nautical miles in length.

These wave gliders will be collecting data until the end of September 2016, when they will be retrieved by a research ship. The wave gliders require volunteer "pilots" to constantly (and remotely) monitor the wave gliders’ movements to ensure they stay on track and, as necessary, avoid any vessel traffic.

LTJG Pryor has committed to piloting the wave gliders for multiple days during this mission. The pilot must be on call around the clock in order to adjust the gliders' courses in case of an approaching ship or storm, as well as to keep an eye on instrument malfunctions, such as a low battery or failing Global Positioning System (GPS).

The two wave gliders actually move through the water at different speeds, which means their pilot needs to be able to direct the vessels into U-turn maneuvers so that the pair stays within roughly 10 nautical miles of each other.

Left, crew deploy one of two wave gliders from the NOAA Ship Oscar Dyson into the Bering Sea. These gliders are studying ocean acidification in Arctic waters. Right, NOAA has deployed the larger and faster Saildrone to study fisheries in the Bering Sea. (NOAA)


NOAA's Pacific Marine Environmental Laboratory has been using autonomous surface vessels to do oceanographic research since 2011. These autonomous vessels include wave gliders and Saildrones equipped with multiple sensors to collect oceanographic data.

During the summer of 2016, there are two missions underway in the Bering Sea using both types of vessels but with very different goals. The wave gliders are studying ocean acidification. Saildrones are wind- and solar-powered vessels that are bigger and faster. Their size allows them to carry a large suite of oceanographic instrumentation and conduct multiple research studies from the same vehicle.

For their latest mission, Saildrones are using acoustic sensors to detect habitat information about important commercial fisheries, such as pollock, and monitor the movement of endangered right whales. (Follow along with the mission.)

NOAA's Office of Response and Restoration is interested in the potential use of aquatic unmanned systems such as wave gliders and Saildrones as a spill response tool for measuring water quality and conditions at the site of an oil spill.

These remotely operated devices have a number of advantages, particularly for spills in dangerous or hard-to-reach locations. They would be cost-efficient to deploy, collect real-time data on oil compound concentrations during a spill, reduce people's exposure to dangerous conditions, and are easier to decontaminate after oil exposure. Scientists have already been experimenting with wave gliders' potential as an oil spill technology tool in the harsh and remote conditions of the Arctic.

NOAA's Pacific Marine Environmental Laboratory is working closely with the designers of these two vehicles, developing them as tools for ocean research by outfitting them with a wide variety of oceanographic instrumentation. The lab is interested in outfitting Saildrones and wave gliders with special hydrocarbon sensors that would be able to detect oil for spill response. LTJG Pryor is excited to see—and potentially pilot—these new technologies as they continue to develop. 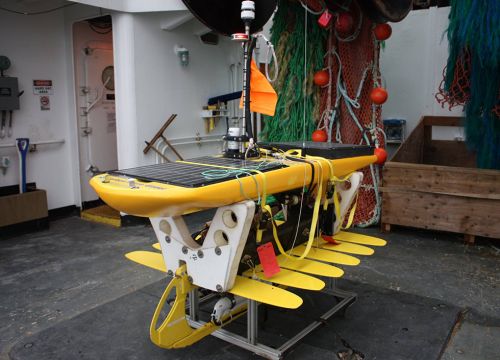 NOAA is exploring how to use technology such as wave gliders, small autonomous robots that travel at the ocean surface via wave energy to collect oceanographic data during oil spills. (NOAA)
Back to top