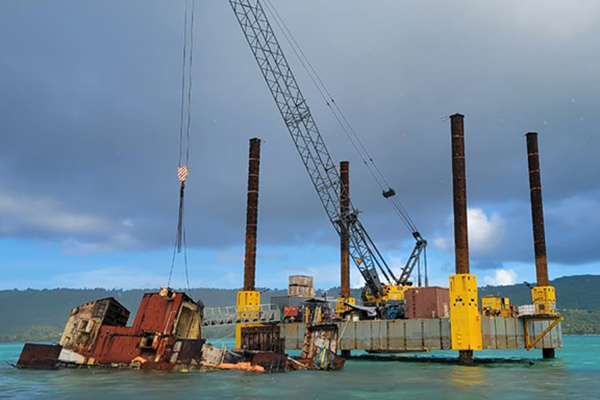 The Smithbridge crane lifts a large piece of the Lady Carolina off of the wreck for transportation back to Saipan. Image credit: Robert Jordan, Koa Consulting.

The Lady Carolina was an 83-foot, 54-ton, steel-hulled fishing vessel that had been grounded in a shallow, highly visible area of the central Saipan Lagoon since it broke free of its mooring during the devastating passing of category 4 Typhoon Soudelor in August 2015. The vessel was further damaged during Typhoon Yutu in 2018. Abandoned and derelict vessels like the Lady Carolina can obstruct navigational channels, damage ecosystems, and diminish the recreational value of the surrounding areas.

The Lady Carolina wreck was cut into smaller pieces that were lifted by crane onto a waiting transport vessel. The pieces were then transported to Saipan for further breakdown, processing, and disposal. In total, the project disposed of: 87.9 tons of metal scrap, 864 cubic feet of common waste (wood, plastic, etc.), and 980 cubic feet of other waste (rigid foam insulation). In addition, approximately 650 gallons of rainwater mixed with diesel and other residual fuels was recovered from inside three separate previously sealed and elevated holds.

A progression story map of the Lady Carolina’s removal is available on the PCRP website.

In order to minimize the negative effects of the removal process on the local environment, approximately 150 coral colonies were temporarily removed from the project area and then reattached to the reef substrate after the removal concluded. Removing the grounded vessel will prevent further environmental impacts to sensitive habitat, such as coral reefs and endangered species.