Update: Nov. 4, 2016—Restoration for the Raritan River moved one step closer with the announcement of a settlement for the American Cyanamid Superfund Site, and the release of the final restoration plan and environmental assessment. Details may be found here.

MAY 5, 2016 -- Following years of intensive cleanup and assessment at the American Cyanamid Superfund Site, NOAA and our partners are now accepting public comment on a draft restoration plan and environmental assessment for this northern New Jersey site.

For many years, the 575 acre site located along the Raritan River in Bridgewater Township was used by the American Cyanamid Company for chemical manufacturing and coal tar distillation.

However, chemical wastes released during manufacturing at the facility harmed natural resources in the sediments and surface waters of the Raritan River and its tributaries.

The facility was designated a Superfund site in 1983 due to contamination by a variety of toxic substances including mercury, chromium, arsenic, lead, and PCBs.

The area affected by the contamination provides habitat for a variety of migratory fish, such as alewife, blueback herring, striped bass, rainbow smelt, American shad, American eel, and other aquatic life.

In addition, large numbers of birds nest, forage, and migrate along the Raritan River, from raptors and songbirds to waterfowl and shorebirds.

Over the years, NOAA has worked with the U.S. Environmental Protection Agency to ensure a thorough cleanup to protect natural resources in the Raritan River watershed. NOAA and our co-trustees, the U.S. Fish and Wildlife Service and the New Jersey Department of Environmental Protection, evaluated the extent of injury in the river and determined the best path toward restoration.

The American Cyanamid Company got its start in the early 1900s by developing an effective fertilizer ingredient, a compound of nitrogen, lime, and carbide called cyanamid. By the early 1920s, the company, whose focus had been primarily agricultural products, began producing cyanide for use in gold and silver extraction and hydrocyanic acid, important to rubber production.

Over the next several decades, the American Cyanamid Company diversified, adding chemicals, plastics, dyes, and resins to their growing line of products. Further expanding into pharmaceuticals, the company provided valuable medical products to the World War II effort.

Starting in the 1920s and continuing up to the 1980s, chemical waste associated with the company's manufacturing practices became an issue. For decades, chemical waste was released directly into the Raritan River.

Waste treatment began in 1940, which meant it was buried at the site or stored in unlined "impoundments," or reservoirs. That practice stopped in 1979 and dye manufacturing ended three years later. By 1985 there was no more direct discharge into the Raritan River and manufacturing at the site ceased in 1999. It is estimated that over time, 800,000 tons of chemical wastes were buried at the site.

A New Chapter for the Raritan River 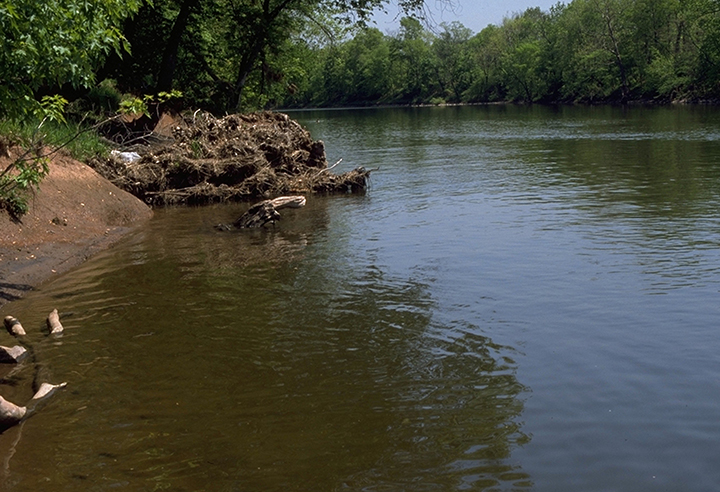 The draft restoration plan for the Raritan River aims to restore passage for migratory fish while improving water quality and habitat due to years of industrial pollution at the American Cyanamid manufacturing site. (NOAA)

The restoration plan and environmental assessment were created by NOAA in coordination with the U.S. Fish and Wildlife Service and the New Jersey Department of Environmental Protection. The plan proposes restoration actions that will compensate for any injuries to the river and related natural resources.

A major component of the restoration would be the removal of the Weston Mill Dam, near the confluence of the Millstone and Raritan Rivers. The original dam, a barrier to migratory fish, is thought to have been built around 1700 to power a mill. Removal of the current dam, a 1930s-era concrete replacement of the original, will help to achieve the restoration goals of restoring passage for migratory fish while improving water quality and habitat.

As explained in the plan, removing this dam will return the flow of the Raritan River and the streams it feeds closer to their natural states and do so without negative impacts to endangered species or cultural, sociological, or archaeological resources.

Long situated in an area of industrial activity, the American Cyanamid Superfund Site is only one of several contaminated sites along the Raritan River and its tributaries. Many of these sites are now being remediated, and the watershed is being restored.

According to NOAA Regional Resource Coordinator, Reyhan Mehran, "While it's likely that this site is among those that contributed to the general degradation of the Raritan River over the last century, the site's cleanup and compensatory projects will be important parts of the story of restoring the Raritan." 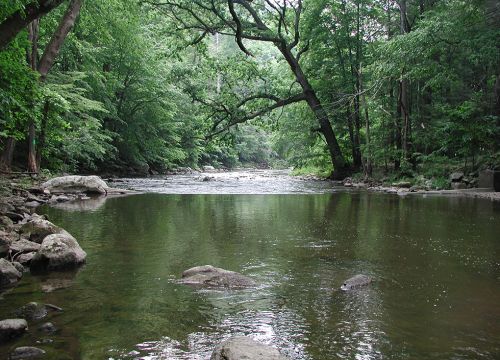 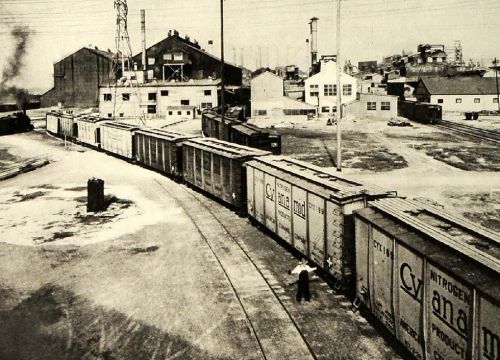 The American Cyanamid Company, shown here circa 1940, produced fertilizers, cyanide, and other chemical products whose wastes were released directly into the Raritan River for decades. (Photographer unknown)
Back to top