JULY 11, 2014 -- So many new and exciting things are happening in the world of ESI mapping! The first half of 2014 focused on developing work plans and contracting for the north- and mid-Atlantic “Sandy” updates. As you may recall, following Post Tropical Cyclone Sandy, Congress provided funding to several agencies to ensure that current and accurate spatial data are available for preparedness and response activities in the Sandy-affected areas. As part of this venture, the Office of Response and Restoration (OR&R) received funding for ESI mapping from Maine to South Carolina. The enormity of the geographic area and time constraints, coupled with the unique opportunity to coordinate with and benefit from the mapping being done by other agencies as part of this effort, led us to approach the Sandy work in a slightly different manner than most of our prior ESI mapping projects. 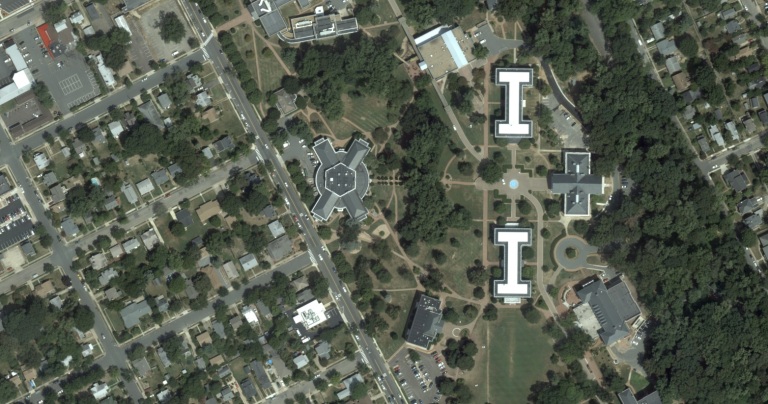 Many of the upcoming ESI data sets for Sandy-related regions will include imagery acquired with a MIST digital sensor. This example image was taken from an altitude of 25,000 feet.

Our Partnerships and Projects

Our long-time partnership with Research Planning, Inc. (RPI) continues, and is being complemented by the addition of three other highly respected coastal mapping groups. The first is another NOAA National Ocean Service office—the National Centers for Coastal Ocean Science’s Center for Coastal Monitoring and Assessment (NCCOS/CCMA). This group has been a frequent contributor of ESI data for previous atlases, but this time they are taking the lead in developing the biology and human-use data components for the Long Island Sound region. This requires summarizing the coastal and near-shore species deemed to be at risk in the event of a spill, identifying and brainstorming with the regional experts regarding each species, then compiling and integrating the data from the diverse sources. The same process is followed for the human-use data components, after which these data sets are integrated with the classified ESI shoreline and wetland polygons to produce the final ESI product.

The next addition to our mapping team is Woolpert, a prime contractor on the NOAA Coastal Geospatial Service Contract. In that capacity, they perform a variety of tasks for NOAA’s National Geodetic Survey Office (NGS). They have also been involved in several Sandy-related projects with the U.S. Geological Survey (USGS), including LIDAR collection for much of the north Atlantic coasts. These data, along with imagery they collect as part of the ESI effort (more details below), will enable Woolpert to validate existing NOAA shoreline data, and to extract current data where the shoreline has seen significant change. Their ESI mapping area covers the Maine and New Hampshire region, as well as the Massachusetts and Rhode Island region. For these areas, Woolpert will be responsible for compiling the complete ESI product—shoreline, biology, and human use. They will also be working in the Connecticut, New York, and New Jersey regions, where they will be leading the ESI shoreline classification phase of the project.

We also welcome Quantum Spatial! This group was previously known as Photo Science, so you may hear them referred to by either name. As Photo Science, they have served as the prime contractor for NOAA’s Coastal Geospatial Service Contract since 2005. They are currently flying parts of the mid-Atlantic coast, acquiring LIDAR and high resolution imagery for NGS, as part of a separate Sandy project. The shoreline extracted under that task will serve as the base shoreline for much of the North Carolina ESI, where Quantum Spatial will be mapping all of the ESI data components. They will also be lead for mapping the biology and human-use data layers for the tidal estuary of the Hudson River, south Long Island, and the New York/New Jersey metro area. In the past, we have tried to coordinate our ESI mapping with the acquisition of new shoreline and imagery by NGS, but it has been very challenging. It is an extra bonus for us to have Quantum Spatial working for both offices in the same region.

RPI will be mapping the remaining Sandy areas, which encompass Maryland, Virginia (including Chesapeake Bay), and South Carolina. I’m sure we will benefit from the knowledge RPI has of their home state, and the experts they deal with locally on a regular basis. Last mapped in 1996, South Carolina is one of the Sandy areas most in need of updating. At the same time, we’re lucky to be able to update Georgia (last mapped in 1997) as part of our regular ESI program. RPI will be doing that work, and will be continuing work on the outer coast of Washington and Oregon. 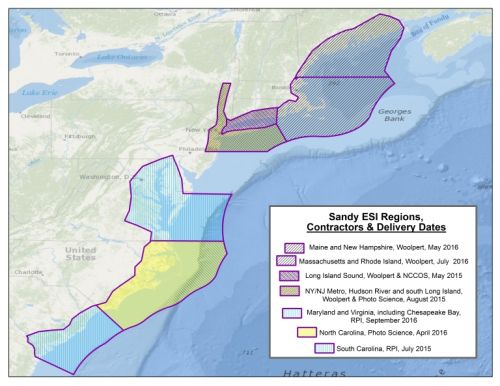 Several enhancements are planned for the Sandy ESI atlases and we anticipate that these additions and changes will continue in future ESI development. The geographic extent of the ESI data has been expanded, aiding not only in identifying coastal resources at risk in the event of a spill, but offering increased utility of the ESI data for planning and response to other natural disasters, such as storms. The inland extent will include an area covered by a 3–5 mile shoreline buffer. Offshore, the data will extend to the territorial water mark, approximately 12 nautical miles. 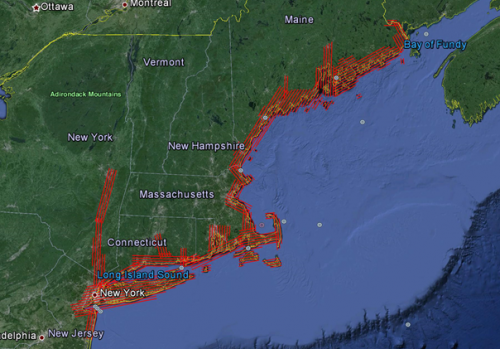 Proposed flightlines for the acquisition of orthorectified imagery.

As part of the Sandy ESI work, Woolpert will be acquiring approximately 11,700 square miles of 15-cm GSD (ground sample distance), natural color orthoimagery. This imagery will be collected at mean low–mean lower low tide, at a time when there is little-to-no cloud cover, smoke, or atmospheric haze to interfere with the image quality. The imagery will be tiled and will provide a complete, high resolution view of the coastal areas from Maine to mid-New Jersey. The result will be a unique data product that we envision being used for many purposes beyond the ESI development. For the data acquisition, Woolpert will be using a MIST digital sensor, a new and exciting digital camera technology. (Perhaps they will provide greater detail in a future blog post!) Ancillary oblique imagery will also be collected and delivered as part of this project.

A contract has been awarded to Quantum Spatial to produce hard-copy ESI atlases for the seven Sandy ESI regions. The maps will be produced at an 8.5 x 11 inch size, and may be somewhat simplified from the current ESIs. For this part of the project, the ultimate goal is a static product that optimizes the transfer of resource information to those who prefer a printed map. Soft-copy PDF products, including the GeoPDF, will be evaluated as potential approaches to enhance data sharing.

In addition, Quantum Spatial will be revisiting some of the ArcMap tools and making recommendations regarding other distribution and use options for the ESI data, such as the use of mobile devices for field applications. As ideas are proposed, I anticipate we will be requesting feedback from all of you, so stay tuned!

Until then, enjoy the summer!