MARCH 22, 2019 — OR&R Emergency Response Division Chief Scott Lundgren and Senior Scientist Lisa DiPinto participated in events on March 18 and 19 relating to a new American Academies of Arts and Science’s publication on Science During Crisis: Best Practices, Research Needs, and Policy Priorities, receiving an advance briefing with other NOAA line office representatives and attending an event rollout with other department and agency representatives and interested parties. 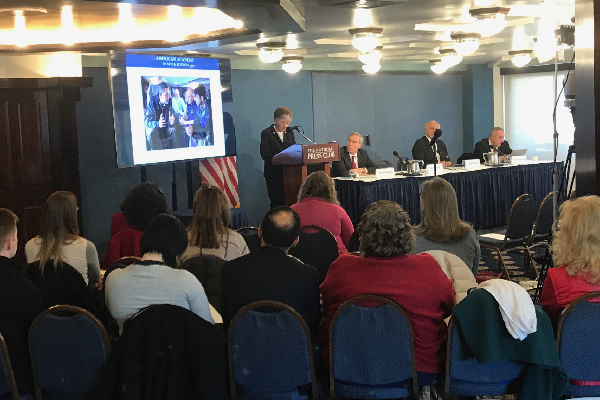 Dr. Rita Colwell, former National Science Foundation director and Research Board Chair, Gulf of Mexico Research Initiative provides a call to action with the publication of Science during Crisis by the American Academy of Arts and Sciences. Image credit: NOAA.

This concise report identifies what is different and important about science during a crisis and provides a set of best practices, research needs, and policy recommendations as part of its call to action.

Because OR&R provides operational science coordination as part of our Scientific Support Coordinator Role during coastal oil and chemical spills as specified in the National Contingency Plan, our emergency representatives have been actively engaged in multiple efforts to enhance science connectivity and operational interface during emergency and crisis response beyond the well-established role in spill response. OR&R representatives have shared our experience and approach, and have sought to further enhance the application of science across response of all types. OR&R has participated in several related events and initiatives:

The American Academy of Arts and Science workshop that supported the development of the Science during Crisis report.

A Subcommittee on Disaster Reduction chartered effort on National Preparedness Science and Technology specifically in a post-incident group.

Involvement in multiple working groups of the Gulf of Mexico Research Initiative Legacy and Synthesis effort.

Publications in Coast Guard Proceedings to advance awareness of this topic with the U.S. Coast Guard, the primary client for OR&R’s scientific support.


Return to OR&R Weekly
Back to top