Solving the Case of the Mystery Sheen

Aug. 21, 2017 - In early March 2017, a U.S. Coast Guard helicopter was returning to its home base when the aircrew spotted a silvery sheen in the water about 35 miles west of San Diego, California.

I imagine the conversation among the crew went something like this:

Is that from yesterday’s spill?  No sir, too far away…

Did any vessels sink out here recently?  Nothing’s been reported…

Do you see any debris in the water?

No sir, but I think I see bubbles coming to the surface within the sheen…

We’re pretty far offshore. How deep is the water here?

Any other petroleum sources out here?

Not that I’m aware of.

Let’s call it in…

Reporting that finding of a mysterious sheen of oil on the ocean’s surface triggers a forensic process that typically requires the highly skilled staff of multiple federal agencies. In this instance, it included U.S. Coast Guard, several NOAA offices, and the U.S. Geological Survey.

Most Coast Guard aircrew members have overflown an oil spill at some point in their careers and many have seen our overflight job aid or taken the NOAA online training to help them identify and describe oil on the water.

In this case, the aircrew took photos and reported their observations to their command center. The crew’s initial report stated the sheen spanned approximately 400 yards by 10 yards, was patchy, thin, and unrecoverable.

Theories in place, the next step was going through the list and systematically eliminating what could be causing the sheen.

The Coast Guard is well known for conducting search and rescue operations when vessels are in distress and lives are at stake. It’s also responsible for ensuring safe and lawful maritime commerce. A check showed no large vessels had been in the area recently nor had any vessels (small or large) been reported missing.

The aircrew’s report of an oil “sheen” indicated to folks on shore that they had seen a very thin layer of oil (<50 microns) on the water’s surface.  That’s pretty darned thin, if you consider that a normal sheet of paper is about 100 microns thick.  Such thin layers don’t normally persist very long in the environment, so it wasn’t expected to stick around very long.

If the sheen had been spread out and patchy, it might be consistent with a spill from a passing ship or an earlier spill that had moved some distance over time.  Instead, the photos showed the sheen as a long linear feature, very narrow at one end and spread out and dissipating at the other (downstream) end.

During subsequent overflights for the next few days, the Coast Guard continued to see a similar sheen in the same location.  Because the original sheen would have dissipated in a matter of hours, these repeated sheen observations seemed to confirm an on-going, fixed source. But, what was it?

Satellites – We checked with NOAA’s environmental satellite office, the National Environmental Satellite, Data, and Information Service, to see if any of their environmental satellite data/imagery had picked anything odd at that location recently or in any of their archived imagery. They looked but they didn’t see anything obvious, but that’s not conclusive either. Even the best satellite sensors for detecting oil on water have limitations. There may very well have been a sheen out there, but it could not be distinguished with satellite data either because the winds were not optimal, the sheen was too small, or there was too much background “noise” in the data.

Maritime history – NOAA plays an important national role in identifying and protecting our nation’s maritime history.  As part of that stewardship role, NOAA and the Coast Guard partnered to evaluate which of the 1,000’s of shipwrecks in United States water might pose a substantial pollution threat.  This effort, called Remediation of Underwater Legacy Environmental Threats, or RULET, resulted in a series of reports in 2013.  No potentially polluting shipwrecks were identified off San Diego through the RULET program.

Charting – Another data source, the Resources and Under Sea Threats, called RUST, which includes shipwrecks and other potential pollution sources, only identified an ammunition dumpsite offshore of San Diego.  That site appears on the NOAA nautical charts, but is over 13 miles away.

Chemistry – A Coast Guard ship was sent out to obtain some sheen samples.  Chemical analysis from their Marine Safety Lab revealed the sheen contained petroleum oil with characteristics most resembling those of moderately weathered crude oil.  A vessel leaking fuel would not show a crude oil signature, but a natural seep would. 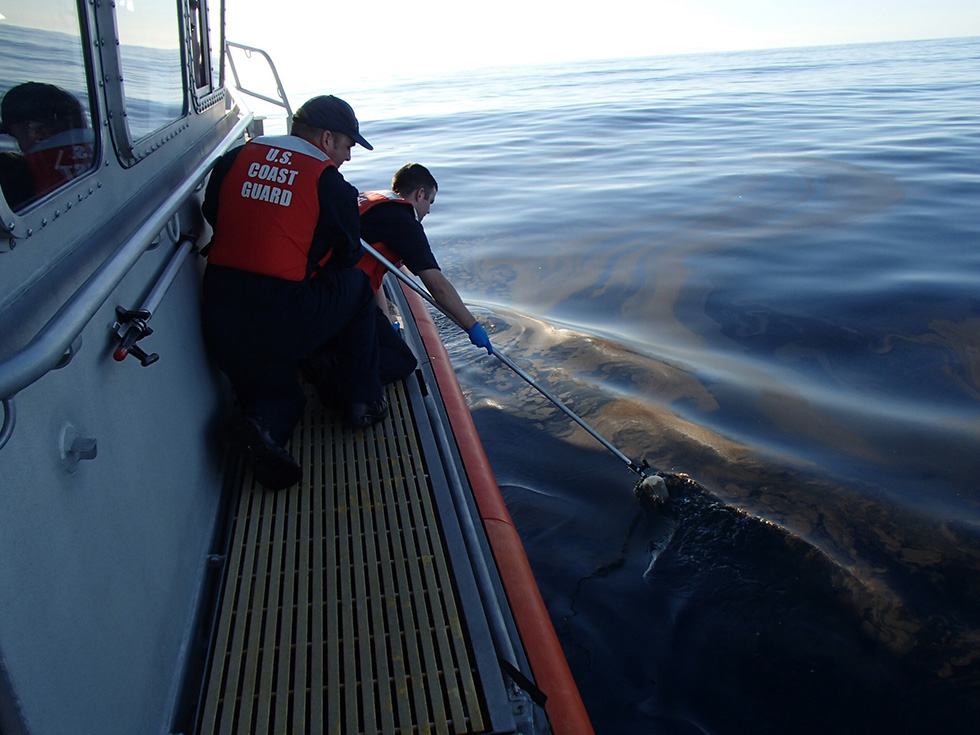 And the Mystery Sheen is: a natural seep?

The seas off Southern California are known to have hundreds of sub-sea natural oil seeps.  Most of them are found off Santa Barbara, and quite a few off Los Angeles, according to Thomas Lorenson, research geologist with the U.S. Geological Survey at the Pacific Coastal and Marine Science Center.

“Recent seafloor mapping south of Santa Catalina Island shows subsea features like mounds that are often associated with oil or natural gas seepage, so it is not too surprising to discover another seep,” said Lorenson. “Luckily a person can pay a visit to a famous oil seep found on land at the La Brea Tar Pits in Los Angeles and imagine what they may look like underwater.”

So though we’ve not (yet) gotten visual confirmation of seep with a submersible or remotely operated vehicle, a natural seep on the sea floor remains the best explanation for this mystery.

Jordan Stout is the Scientific Support Coordinator in California, providing scientific input to the U.S. Coast Guard and Environmental Protection Agency for spills of oil and hazardous material. 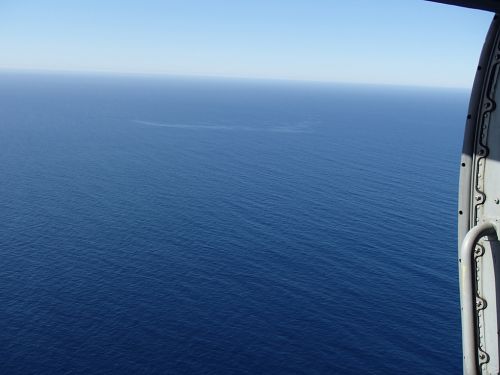 Can you see the sheen in the distance? That lighter blue just below the horizon caught the attention of the U.S. Coast Guard helicopter crew that led to the discovery of a natural oil seep off the coast of San Diego, California. The sheen’s narrowing on the left with broader “feathering” on the right suggested a submerged source. Image credit: U.S. Coast Guard.
Back to top