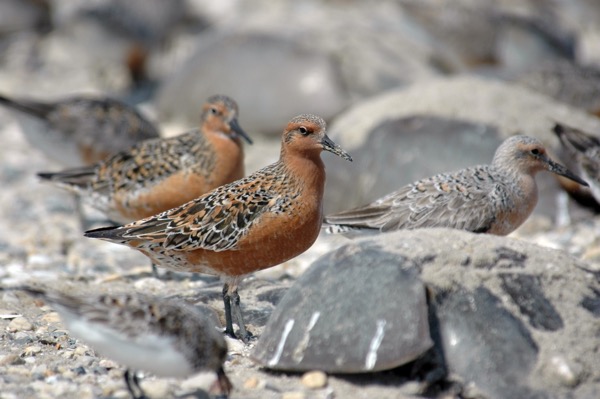 The Area Committee is a federally mandated group coordinated by the lead federal agency for a geographic area, in this case, the U.S. Coast Guard Sector Delaware Bay, which has the responsibility of responding to oil and chemical spills. Being selected to receive this award was the culmination of several years of hard work and coordination among the Area Committee members.

Sector Delaware’s Bay’s winning entry was titled, “Collaborative Oil Spill Planning to Protect Migratory Birds.” Sector Delaware Bay oversees the arrivals and departures of 2,500 commercial vessels each year, amid one of the most densely populated corridors in the U.S. The Delaware Bay and River waterway generates $60 billion a year to the States of Delaware, New Jersey, and Pennsylvania and supports 135,000 jobs. The waterway is also the largest freshwater port in the world, used by thousands of recreational boaters, fishermen, and others. Lastly, the waterway is located in the middle of the critical East Coast Migratory Bird Flyway. Each spring, over 90% of the endangered American Rufus Red Knot population uses the Delaware Bay as a critical feeding habitat when hundreds of thousands of horseshoe crabs come ashore to lay their eggs along the bay’s sandy shorelines.

Beginning in 2014, members of the Sector Delaware Bay Area Committee took on the assignment to develop a standardized matrix to be used by federal, state, and local responders to protect a number of endangered species, including marine mammals, turtles, and migratory birds. The Area Committee’s goal was to develop tools that would not only identify those threatened and endangered species that may be present during an oil or chemical spill, but also develop best management practices to protect these species and their critical habitats. The three primary goals were to:

The endangered species matrix identifies bird species that may be in an area of a spill response and evaluates different response techniques (e.g., booming, skimming) and the likely impact of that response technique on a specific bird species or their critical habitat. The matrix also includes information on the status of the birds, temporal occurrence and range. The color coding, green through red, provides responders with a quick reference for what species may be present and best management practices to minimize or avoid additional impacts due to response activities.

All Area Committee members made significant contributions to protect these endangered and threatened species and their respective habitats, which resulted in Sector Delaware Bay receiving this prestigious award.