Aug. 14, 2017 - Fish will once again be able to swim unencumbered in New Jersey’s Millstone River as removal of the Weston Mill Dam begins.

The project is part of the settlement negotiated to compensate for potential injuries to fish and other in-river trust resources from long-term hazardous substance releases related to the nearby American Cyanamid Superfund Site in Bridgewater, New Jersey. The site was used for manufacturing of chemicals, dyes, and pharmaceuticals and for coal tar distillation from the early 1900s until 1999.


“Removal of the Weston Mill Dam is an important step in long-term efforts to restore habitat in the Raritan River watershed,” said David Westerholm, Director of NOAA’s Office of Response and Restoration. “Cooperative resolution of natural resource damage liability benefits everyone - the public, industry, and the ecosystem. These collaborative efforts lower damage assessment costs, reduce risk of litigation, and – most importantly – shorten the time between injury and restoration of public resources.”


Removal of the dam will return the flow of the river closer to its natural state restoring passage for migratory fish, and improving water quality and habitat without negative impacts to endangered species or cultural, sociological, or archaeological resources.

The project will open about 4.5 miles of the Millstone River to migratory species - including American shad and river herring -that spend much of their lives in the ocean and estuaries but need to return to freshwater rivers and streams to spawn, according to the New Jersey Department of Environmental Protection. American eel, which spawn in the ocean but spend much of their lives in rivers and streams, will also benefit.


The dam removal will also benefit people by increasing safety and improving recreational and scenic enjoyment of the waterway. A free-flowing river allows safer kayaking, canoeing, and fishing.


Here in the United States, millions of dams and other barriers block fish from reaching upstream spawning and rearing habitat. Although dams often provide benefits, such as hydroelectric power and irrigation many, including the Weston Mill Dam, are now obsolete and present a hazard.


Fish ladders, bypass channels, and rock ramps are forms of Technical Fish Passage that may be considered when dam removal is not an option, according to NOAA’s National Marine Fisheries Restoration Center.


NOAA and our co-trustees - the U.S. Department of Interior and the New Jersey Department of Environmental Protection - secured removal of the Weston Mill Dam through cooperative resolution of natural resource damages and ongoing work with our local partners including the Stony Brook-Millstone Watershed Association.


You can read more about the Raritan River in this article:

Reyhan Mehran of the Office of Response and Restoration and Carl Alderson of the NOAA Fisheries Restoration Center contributed to this article.

UPDATE — Watch a video on the removal of the dam here. 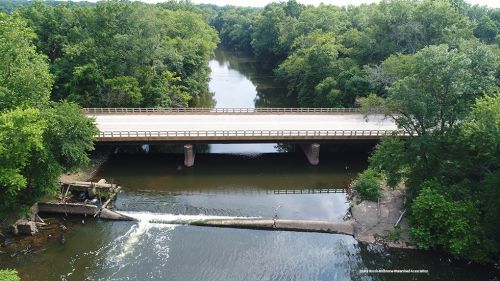 Removal of the Weston Mill Dam is an important step in long-term efforts to restore habitat in the Raritan River watershed. Image credit: Stony Brook-Millstone Watershed Association.
Back to top