Zeroing in on Threatened and Endangered Species

JANUARY 9, 2013 -- OR&R is happy to announce a new ESI product—the Threatened and Endangered (T&E) Species Geodatabases! The T&E geodatabases comprise a subset of the original ESI data, focusing on the coastal species and habitats that are federally and/or state listed as endangered, threatened, protected, or as a species of concern. The complexity of ESI data can make it difficult for those who use the data intermittently to quickly extract the information they need. These T&E databases will offer a more user-friendly option to access some of the more critical biological information for a region.

The new T&E geodatabases are offered on our ESI Downloads page, but read on to learn more about them.

The T&E data are provided in a personal geodatabase format (.mdb). In addition, a map document (.mxd) and separate layer files are available, which replicate the standard ESI symbology and contain links to the supplemental data tables. Each geodatabase corresponds in coverage to an original ESI atlas and contains individual species layers (feature classes), along with the land/water interface (hydro layer) for geographic reference.

For each atlas, a map document (.mxd) has been created to incorporate all of the T&E species data. These documents, for use in Esri's ArcMap software, use all of the standard ESI colors and hatch patterns. In the example below, you see a map of Great South Bay from the Long Island ESI atlas. Polygons indicate where the piping plover, shortnose sturgeon, eastern mud turtle, and seabeach amaranth occur in June. 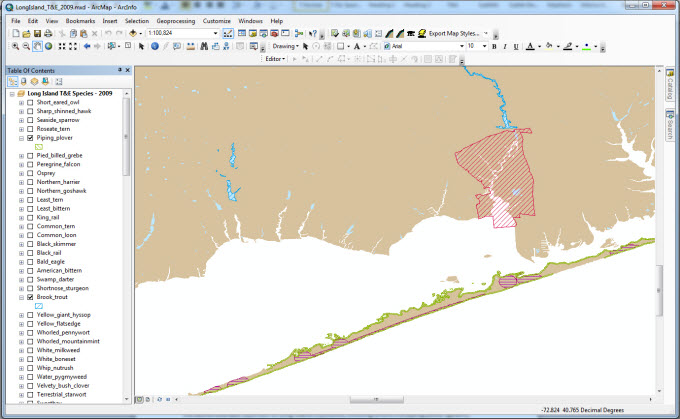 The table of contents, shown in the left panel, lists all the T&E species found in the Long Island atlas. At the top of the list, in bold, is the data frame name: Long Island T&E Species – 2009. Because the listing status is dynamic, each map document and data frame name includes the year of the atlas publication. As always, it is important to remember that the ESI data are a "snapshot in time." The publication year is also included in each record of the feature attribute table, as shown below.

The feature attribute tables include all of the basic information associated with each polygon, point, or line. The tables include fields for subelement (an ESI grouping of species with similar habitat preferences and feeding styles), common name, genus and species, threatened and endangered status, atlas publication date, concentration, seasonal presence, and life history summaries. There are also "month" fields, to simplify searching for presence of a species in a particular month or season.

Three related tables are available if more information is desired. These are the sources table, the breed_dt table, and the ThreatenedEndangered table. These provide search capability within a species for monthly breeding activities and information about the original data source.

Aside from viewing these data in the "canned" ArcMap T&E documents, they can easily be brought into existing map projects. Layer files are available that include the symbology, as well as links to the three supplementary tables if they are added to the ArcMap data frame. In the near future, these data will also be available within NOAA's online mapping tool, ERMA, and as a separate map service. These additional products will bring ESI data to many users who lack access to Esri's ArcMap.

Questions: As always, contact the ESI Specialist with questions, comments, or suggestions about ESI maps and data.