When a disaster occurs, it’s critical that the organizations involved in the response can communicate and share information quickly and effectively. That means groups as diverse and numerous as emergency management, fire service, law enforcement, emergency medical, and responders from local, state, tribal, and federal governments all need to be on the same page. At NOAA, we’re working with our partners to help ensure that the information responders need flows quickly and accurately—when they need it.

An important part of being able to share data is establishing a common set of guidelines or rules for exchanging information. Having a data standard, for example, can enable neighboring districts and states to share key information with one another—even if they aren't using the same system for storing their information. The ability to pass information back and forth like that may seem basic, but imagine an emergency in which different response agencies can’t communicate with one another because their radios are incompatible (one of the problems that came to light in the aftermath of the terrorist attacks of September 11, 2001). 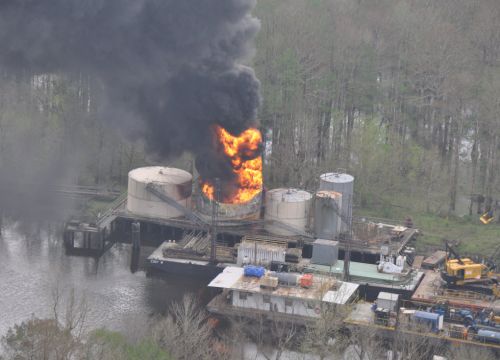 In the United States, organizations and businesses that produce or store specific hazardous chemicals above certain amounts are required to disclose information to local fire departments, local emergency planning committees, and state or tribal emergency response commissions to help those groups plan for and respond to chemical emergencies.

This process is mandated by the Emergency Planning and Community Right-to-Know Act (EPCRA). Under EPCRA, those chemical sites must complete an annual “Tier II form,” where they share information about the chemicals on site (such as types, quantities, and locations), as well as other important details like contact information for their site’s emergency coordinator.

Many of the items in the executive order are specifically related to facilitating the exchange of information to help emergency responders and planners. Among the changes that EO 13650 proposes is the creation of a national Tier II data standard so that information can be shared between systems (e.g., between neighboring states using different Tier II filing systems) to improve the exchange of Tier II information.

NOAA and the U.S. Environmental Protection Agency (EPA) have recently developed and released version 1.0.0 of the national Tier II data standard, which will allow Tier II information to be shared by all programs that follow the standard. We chose a common platform, XML, for the new standard to make adoption of the standard as easy as possible.

NOAA and EPA also develop a Tier II management program called Tier2 Submit™, which allows chemical sites to complete Tier II forms electronically. The chemical sites can then submit those electronic Tier II submission files, according to the requirements of their state. About half of the states and territories in the U.S. use the Tier2 Submit program, which is available for download from the EPA website. Tier2 Submit files can also be imported directly into the CAMEOfm database program for emergency response and planning purposes.

When the new version of Tier2 Submit is released this fall, it will be able to import and export data in an XML format that adheres to the new national Tier II data standard. (Tier2 Submit will also continue to support import from the older file formats in this upcoming release.) While this is a significant change to the data file structure and an important improvement for exchanging data between programs, it will have minimal impact on the user experience and they will interact with Tier2 Submit much as they have in previous years. (The fall release of CAMEOfm will also allow Tier II information to be imported via the new XML data standard, but the next CAMEOfm will not include any additional import or export XML support beyond that.)

A Suite of Updates for Safety

Besides the Tier II data standard, the joint NOAA-EPA CAMEO® team has implemented several other changes, prompted by the executive order, to the suite of chemical response and planning software. We have added the Department of Homeland Security’s Chemical Facility Anti-Terrorism Standards (CFATS) information in CAMEO Chemicals; added Spanish and French response guides from the 2016 Emergency Response Guidebook in CAMEO Chemicals; included the Navy’s RAILCAR model in ALOHA® as an alternative tank source strength model, and redesigned the MARPLOT® mapping program to allow users to incorporate geospatial data from many sources (and in many different file formats).

In addition, the CAMEO team is currently developing several apps for mobile phones and tablets.

The CAMEO software products have been valuable hazardous materials response and planning tools since the first products were introduced in 1986. The CAMEO suite consists of four core programs—ALOHA (models hazardous gas clouds), CAMEO Chemicals (a chemical database), CAMEOfm (a chemical emergency data management application), and MARPLOT (a mapping program)—as well as several related programs, such as Tier2 Submit. These applications can be used together or separately, but when used together, the programs interact seamlessly and information can be linked easily between them.

As a result of NOAA and EPA’s work to address Executive Order 13650 recommendations, emergency responders have improved access to information and an enhanced ability to share information with other organizations for chemical facility safety and security—improving safety for everyone when a disaster occurs.