At the Bottom of the Gulf of Mexico, Corals and Diversity Suffered After Deepwater Horizon Oil Spill 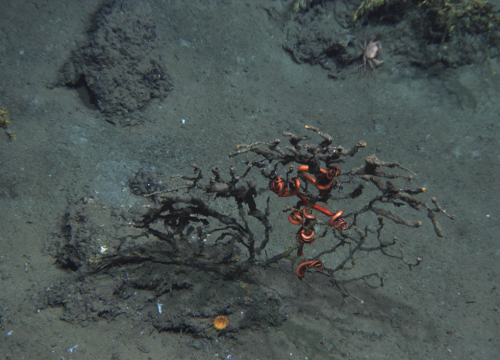 This is the second in a series of stories over the coming weeks looking at various topics related to the response, the Natural Resource Damage Assessment science, restoration efforts, and the future of the Gulf of Mexico.

APRIL 1, 2015 — Very little, if any, light from the sun successfully travels to the extreme bottom of the Gulf of Mexico. At these dark depths, the water is cold and the inescapable pressure of thousands of feet of ocean bears down on everything.

Yet life in the deep ocean is incredibly diverse. Here, delicate branches of soft coral are embraced by the curling arms of brittlestars. Slender sea fans, tinged with pink, reach for tiny morsels of food drifting down like snow from above. From minute marine worms to elongated fish, the diversity of the deep ocean is also a hallmark of its health and stability.

However, this picture of health was disrupted on April 20, 2010. Beginning that day and for almost three months after, the Macondo wellhead unleashed an unprecedented amount of oil and natural gas nearly a mile beneath the ocean.

In addition, the response to this oil spill released large amounts of chemical dispersant, both at the source of the leaking oil and on the ocean surface. These actions were meant to break down oil that might have threatened life at the sea surface and on Gulf shores. Nevertheless, the implications for the ocean floor were largely unknown at the time.

In the five years since the Deepwater Horizon oil spill, a number of academic and independent scientists along with state and federal agencies, including NOAA and the Bureau of Ocean Energy Management, have been collaborating to study just how this oil spill and response affected the deep ocean and seafloor of the Gulf.

What they found was the footprint of the oil spill on the seafloor, stamped on sickened deep-sea corals and out-of-balance communities of tiny marine invertebrates. 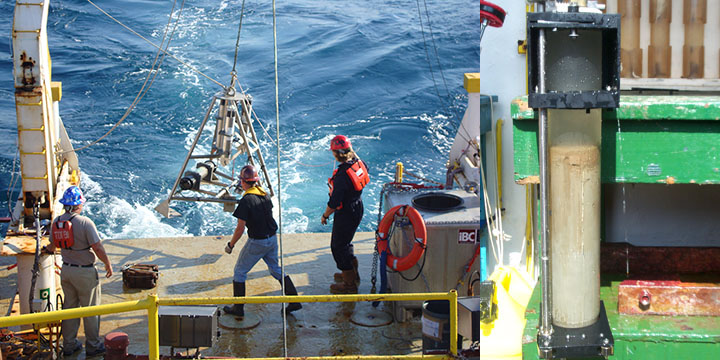 Left, scientists launch a seafloor sampling device off a research vessel into the Gulf of Mexico. Right, In addition to impacts to the diversity of marine life living on the seafloor, researchers found a conservative chemical tracer of petroleum in surface seafloor sediments extending 15 miles from the Macondo wellhead (Valentine et al. 2014). (Courtesy of Paul Montagna, Texas A&M University)

A part of the world difficult to reach—and therefore difficult to know—the depths of the Gulf of Mexico required a huge collaborative and technological effort to study its inhabitants. Beginning in the fall of 2010, teams of scientists set out on multiple research cruises to collect deep-sea data, armed with specialized equipment, including remotely operated vehicles (ROVs), cameras capable of withstanding the crushing pressure of the deep ocean, and devices that could bore into the ocean bottom and scoop up multiple samples of sediments at a time.

Through these efforts, researchers have uncovered large areas of the Gulf of Mexico seafloor that contain most of the oil spill's notable deep-sea impacts. One area in particular surrounds the damaged wellhead and stretches to the southwest, following the path of the massive underwater plume of Deepwater Horizon oil. At times, up to 650 feet thick and over a mile wide, the oil plume drifted at depths more than 3,500 feet beneath the ocean surface, leaving traces of its presence on the bottom as it went (Camilli et al. 2010).

The Macondo wellhead sits at the center of a bull’s-eye–shaped pattern of harm on the seafloor, with oil-related impacts lessening in intensity farther from the oil's source. Further tying this pattern of injury to the Deepwater Horizon spill, a conservative chemical tracer of petroleum turned up in surface seafloor sediments extending 15 miles from the wellhead (Valentine et al. 2014).

Few people ever see the bottom of the deep ocean. So what do these impacted areas actually look like? Starting several months after the leaking well was capped, researchers used ROVs and special cameras to dive down roughly 4,500 feet. They found multiple deep-sea coral colonies showing recent signs of poor health, stress, and tissue damage. On these corals, the polyps, which normally extend frilly tentacles from the corals’ branching arms, were pulled back, and excessive mucus hung from the corals' skeletons, which also revealed patches of dead tissue. All of these symptoms have been observed in corals experimentally exposed to crude oil (White et al. 2012 PDF).

A time series of coral showing the progression of typical impacts at a site of coral colonies located less than seven miles from the source of Deepwater Horizon oil. You can see the brown "floc" material present in November 2010 disappears by March 2011 and afterward, is replaced by fuzzy gray hydroids and the coral loses its brittlestar companion. (Credit: Hsing et al. 2013)

Many of these coral colonies were partly or entirely coated in a clumpy brown material, which researchers referred to as "floc." Chemical analysis of this material revealed the presence of petroleum droplets with similar chemical markers to Deepwater Horizon oil. The brittlestars usually associated with these corals also appeared in strange colors and positions. Some entire coral colonies were dead.

Even one and two years later, deep-sea corals within the footprint of the spill still had not recovered. Hydroids took the place of the brown floc material on affected corals. Relatives of jellies, hydroids are fuzzy, grayish marine invertebrates that are known to encrust unhealthy coral.

Life on and under the sediment at the bottom of the Gulf also suffered, with the diversity of a wide range of marine life dropping across an area roughly three times the size of Manhattan (Montagna et al. 2013). Notably, numbers of tiny, pollution-tolerant nematodes increased in areas of moderate impact but at the expense of the number and types of other species, particularly copepods, small crustaceans at the base of the food chain. These effects were related to the concentration of oil compounds in sediments and to the distance from the Deepwater Horizon spill but not to natural oil seeps. 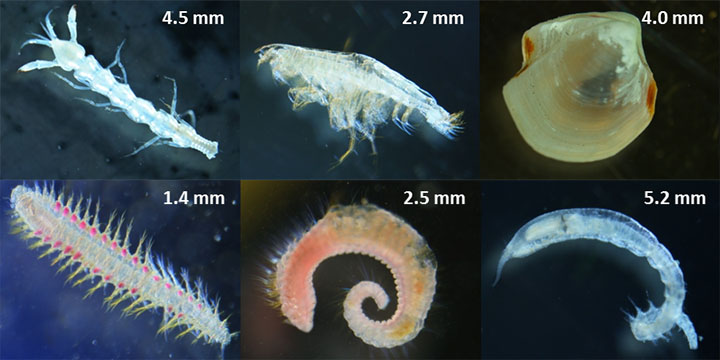 Examples of some of the common but very small marine invertebrates found living on and under the Gulf of Mexico seafloor. The top row shows, from left, two types of crustaceans and a mollusk, which are more sensitive to pollution. The bottom row shows three types of marine worms known as polychaetes, which tended to dominate ocean sediments with higher oil contamination found near corals. (Courtesy of Paul Montagna, Texas A&M University)

More sensitive to pollution, fewer types and numbers of crustaceans and mollusks were found in sediments around coral colonies showing impacts. Instead, a few types of segmented marine worms known as polychaetes tended to dominate ocean sediments with higher oil contamination near these corals (Fisher et al. 2014).

Life on the bottom of the ocean moves slowly. Deep-sea corals live for hundreds to thousands of years, and their deaths are rare events. Some of the corals coated in oily brown floc are about 600 years old (Prouty et al. 2014). The observed impacts to life in the deep ocean are tied closely to the Deepwater Horizon oil spill, but the full extent of the harm and the eventual recovery may take years, even decades, to manifest (Fisher and Demopoulos, et al. 2014).

Learn more about the studies supported by the federal government's Natural Resource Damage Assessment for the Deepwater Horizon oil spill, which determines the environmental harm due to the oil spill and response and seeks compensation from those responsible in order to restore the affected resources.