Deepwater Horizon: Response in the Midst of an Historic Crisis 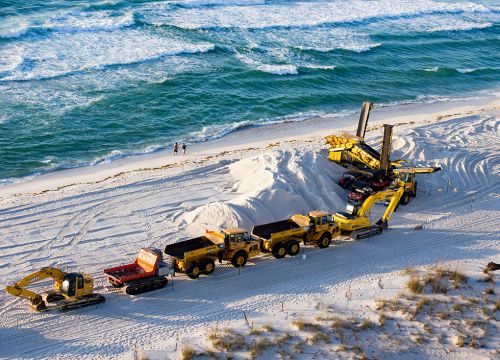 April 3, 2017 — The Deepwater Horizon oil spill began on April 20, 2010, with a blowout of BP's Macondo drilling platform in the Gulf of Mexico. In addition to the death of 11 men, the spill resulted in the largest mobilization of resources addressing an environmental emergency in the history of the United States.

With only 12 full time responders and about 120 NOAA staff nationally, the size and complexity of the incident taxed the spill team’s capacity to respond. NOAA recruited retired staff and contractors to provide additional emergency support, along with scientists from across the nation and internationally. 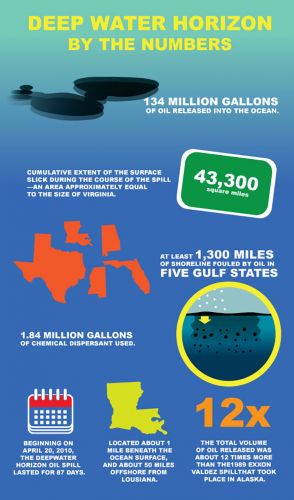 Forecasting the oil’s movement: How would the Loop Current effect the oil’s potential to spread to the Florida Keys and beyond? To answer that staff worked 24-7 modeling where the oil might spread in an effort to help defuse the public’s concern that oil would rapidly travel around Florida and oil shorelines along the Atlantic seaboard. After more than a month of daily mapping, overflights, and satellite analyses, our data showed no recoverable oil in the area, and the threat of oil spreading by the Loop Current diminished.

Calculating how much oil spilled and where it went: Estimating the size of an oil spill is difficult, and determining the volume spilled from this leaking wellhead over a mile deep was even more challenging. Federal scientists and engineers worked with experts from universities on interagency teams to calculate the flow rate and total volume of oil spilled.

Another interagency team, led by the U. S. Geological Survey, NOAA, and the National Institute of Standards and Technology developed a tool called the Oil Budget Calculator to determine what happened to the oil. Working with these experts and agencies, NOAA was able to estimate the amount spilled, and how much oil was chemically dispersed, burned, and recovered by skimmers.

NOAA scientists also studied how much oil naturally evaporated and dispersed, sank to the sea floor, or trapped in shoreline sediments. Other studies determined how long it took the oil to degrade in those different environments.

While dispersant use reduced the amount of surface and shoreline oiling, and reduced marsh impacts, dispersants likely did increase impacts to some species during sensitive life stages that live in the water column and the deep ocean. The use of dispersants is under review.

Quickly communicating the science of the situation including: The public demanded answers fast, and social media rapidly took over as a primary tool to voice their concerns. We responded with continual updates through social media and on our website and blog. Still, keeping ahead of misconceptions and misinformation about the spill proved challenging. The lesson learned is that we can't underestimate social media interest.

In addition to responding to the public’s need for accurate information, NOAA had to coordinate with universities and other academics to and quickly leverage existing research on an active oil spill. The size and multi-month aspect of the spill generated huge academic interest, but also meant that scientists were mobilizing and conducting field activities in the middle of an active response.

The list of lessons learned during the response continues to grow and those lessons are not limited to science. Organizational, administrative, policy, and outreach challenges were also significant considering the size, scope, and complexity of the response.

After nearly 30 years, the Exxon Valdez spill studies continue in an effort to understand the impacts and recovery in Prince William Sound. Given that timeline as a guide, NOAA expects Deepwater Horizon studies to continue for decades.

It will take that research and the perspective of time to understand the overall effects of the spill and response actions on the Gulf ecosystem and the communities that depend on a healthy coast.

Read more about Deepwater Horizon and the work of NOAA’s Office of Response and Restoration and partners in responding to the spill, documenting the environmental damage, and holding BP accountable for restoring injured resources:

Doug Helton and Kathleen Goggin of NOAA’s Office of Response and Restoration contributed to this article.