How Would Chemical Dispersants Work on an Arctic Oil Spill? 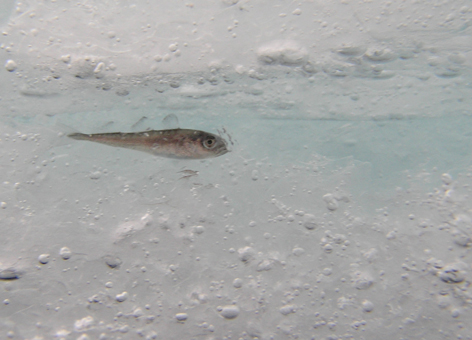 An arctic cod, a key part of the Arctic food web, rests in an ice-covered space in Alaska's Beaufort Sea, North of Point Barrow. This species was one of the subjects of the research program on dispersant effects in the Arctic. (Shawn Harper/Hidden Ocean 2005 Expedition: NOAA Office of Ocean Exploration)

JULY 9, 2012 — If there were a huge oil spill in the Arctic, would chemical dispersants work under the frigid conditions there? And once dispersants break down oil into smaller droplets, how toxic are the oil and chemicals to key species in the short Arctic food web? Would the dispersed oil and dispersant actually biodegrade in cold Arctic waters? With Shell currently on track to drill several exploratory wells in the Chukchi and Beaufort Seas this summer, these are very timely questions—and finally, we are beginning to find some answers. 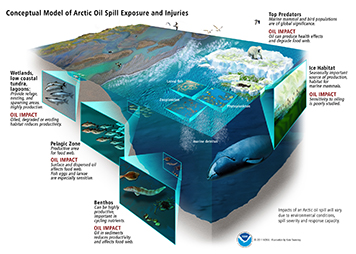 The illustration, not associated with this study, shows potential oil spill impacts to wildlife and habitats in the Arctic Ocean. Click for larger view. Credit: NOAA/Kate Sweeney, Illustration. Read on our blog about the process of developing this model.

Aiming for as realistic Arctic conditions as possible, they captured arctic zooplankton (krill and Calanus copepods, which are tiny marine crustaceans) as well as larval and juvenile fish (arctic cod and sculpin) from the coastal waters of the Beaufort Sea. These organisms are key players in the Arctic food web and culturing them in order to conduct toxicity tests hopefully would reveal how negative impacts from oil and dispersants could cascade through the ecosystem. The researchers also conducted toxicity and biodegradation tests in actual waters collected from the Beaufort Sea. Five oil companies were pooling their talents and financial resources to conduct these tests and gather information: Shell, ConocoPhillips, Statoil, ExxonMobil, and BP.

NOAA's Scientific Support Coordinator for Alaska, John Whitney, was fortunate enough to serve on a unique, yet very important, part of the group: the Technical Advisory Committee, which is composed of non-industry technical and non-technical stakeholders. We met once a month to discuss the results and advise them on ongoing scientific tests. Drs. Word and Perkins and their colleagues recently presented the results of this research at a workshop in Anchorage, Alaska. The workshop began with Tim Nedwed of ExxonMobil making a strong case for immediate and robust access to all the major oil spill response options—mechanical methods, in situ burning, and dispersants—in order to deal with a large oil release in the Arctic or any other location.

Mechanical methods (e.g., skimmers) and in situ burning typically encounter spilled oil at low rates, historically removing only 5% to 15% of the oil on the water's surface. This makes chemical dispersants a very attractive option when approaching a big spill using a large aircraft (such as a C-130) to deliver dispersants. After all, Dr. Nedwed pointed out, the ultimate goal of dispersants is to deliver a significant boost to the rate of oil biodegradation that happens naturally after most oil spills. Here are some of the major findings from their research:

This workshop garnered attention from the oil industry, government regulatory and natural resource agencies, academia, Alaska North Slope residents, private consultants, and non-governmental organizations. It concluded with a brief discussion of Net Environmental Benefit Analysis, a scientific process of weighing the costs against the benefits to the environment, with emphasis on the importance of making this process both science-based and, at the same time, compatible with listening to the subsistence Alaska Native population, a significant and valuable voice in the Arctic.