On the Hunt for Shipping Containers Lost off California Coast

DECEMBER 16, 2015 -- On December 11, 2015 the Matson container ship M/V Manoa was en route to Seattle from Oakland, California, when it lost 12 large containers in heavy seas. At the time of the spill, the ship was maneuvering in order to allow the San Francisco Bay harbor pilot to disembark. The containers, which are 40 feet long and 9 feet wide, are reported as empty except for miscellaneous packing materials, such as plastic crates and packing materials such as Styrofoam. Luckily there were no hazardous materials in the cargo that was spilled. The accident occurred about eight miles outside of the Golden Gate Bridge in the Greater Farallones National Marine Sanctuary. Three containers have come ashore, two at or near Baker Beach, just south of the Golden Gate Bridge, and one at Mori Point near Pacifica, California. The search continues for the others. The Coast Guard is responding to this incident with assistance from NOAA, the National Park Service, State of California, and City of San Francisco. The responsible party is working with an environmental contractor to recover the debris and containers. The Coast Guard asks that if a container is found floating or approaching shore to exercise caution and notify the Coast Guard Sector San Francisco Command Center at 415-399-7300. On December 14, NOAA's Office of Response and Restoration became involved when the Coast Guard Sector San Francisco contacted the NOAA Scientific Support Coordinator for the region, Jordan Stout. The Coast Guard requested help from the Office of Response and Restoration in tracking the missing containers. Oceanographer Chris Barker is providing trajectory modeling, using wind and current information to predict the potential direction of the spilled containers. 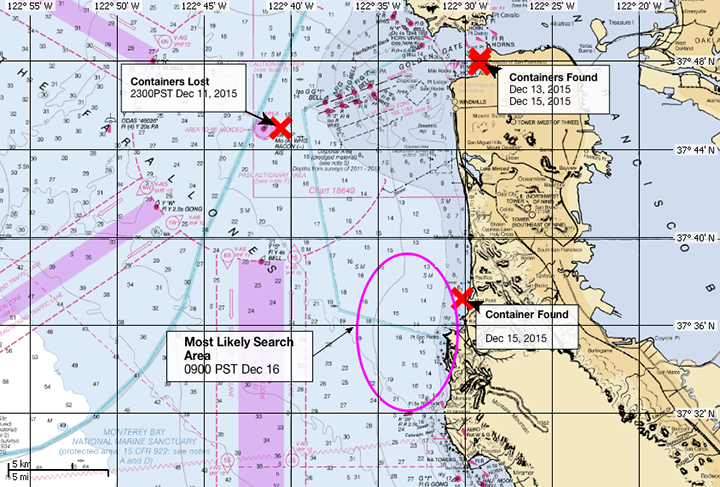 A NOAA oceanographer is using wind and current information to predict the potential direction of the spilled shipping containers off the California coast. This information is helping direct search efforts for the remaining containers. (NOAA) 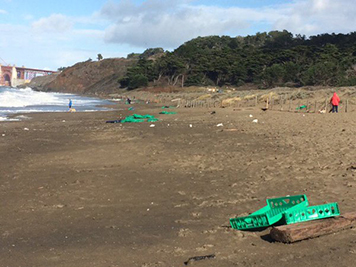 Plastic crates have been washing up on California beaches after 12 containers fell off the M/V Manoa on December 11, 2015. (National Park Service)

There is a concern that the containers, contents, or parts of the containers could pose a hazard to wildlife through entanglement or by ingestion. There is also concern about the containers potentially damaging ocean and coastal bottom habitats within the marine sanctuary. (Read a statement from the sanctuary superintendent. [PDF]) This incident illustrates another way that marine debris can enter the environment. According to Sherry Lippiatt of the NOAA Marine Debris Program, "This incident is a reminder that while marine debris is an everyday problem, winter storms and higher ocean swells may increase the amount of debris entering the environment." To learn more about how storms can lead to increased marine debris, take a look at the recent article, California's "First Flush." For information on how citizen science can help in situations like this, see this article about searching for Japan tsunami debris on the California coast. 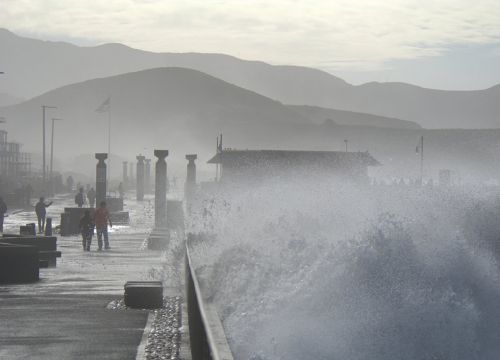 The M/V Manoa lost 12 containers in stormy seas off the coast of California in the area of the Greater Farallones National Marine Sanctuary. (Credit: Beach Watch/mojoscoast) 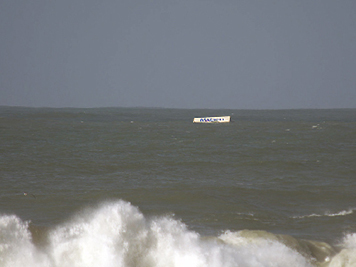 So far, three of the 12 lost shipping containers have washed ashore on California beaches. The search continues for the others. (Credit: Beach Watch/mojoscoast)
Back to top