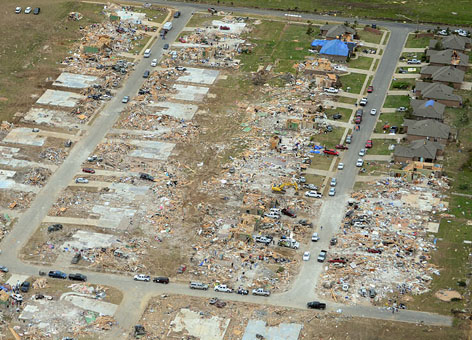 NOAA and EPA's MARPLOT mapping software was designed for emergency responders and planners dealing with chemical spills. However, its features lend it to a host of other uses, from search and rescue after a tornado to dealing with wildfires. (NOAA National Weather Service)

This is a guest post by emergency planner Tom Bergman.

FEBRUARY 5, 2015 -- For 20 years, thousands of emergency planners and responders have used the MARPLOT mapping software to respond to hazardous chemical spills.

But creative MARPLOT users have also employed the program for a wide range of other uses, including dispatching air ambulances and helping identify a serial arsonist.

MARPLOT is the mapping component of a suite of software programs called CAMEO, jointly developed by NOAA's Office of Response and Restoration and the U.S. Environmental Protection Agency to help emergency planners and responders deal with chemical spills.

These agencies have just released a new version of MARPLOT (version 5.0).

To illustrate a few of the new capabilities of MARPLOT 5, let's imagine that a category EF2/EF3 tornado is blowing through McClain County, Oklahoma. McClain County is a mostly rural area, with only three small towns. For this scenario, we will assume the tornado passes through the small town of Blanchard, Oklahoma.

Immediately following the tornado, first responders will conduct initial damage surveys of the affected area. Generally, the Incident Command, which is the multi-agency team responsible for managing the emergency response, will want to divide the area the tornado impacted into a "grid" and assign teams to survey specific areas of it. MARPLOT 5 has a new "gridding" tool, which allows those in an Incident Command to determine and display the various survey zones.

In the Ready Files

Fortunately, McClain County is well-prepared to deal with this emergency. The county already has a complete list of addresses for the affected area in the proper file format for working in maps (E911 address point shape files) and has imported them into MARPLOT 5 before the tornado hit.

In addition, McClain Emergency Management has compiled information such as locations with chemicals stored on site, homes or businesses with fortified safe rooms, and any special populations such as those with impaired mobility and made that data available in MARPLOT 5. Having this information at their fingertips helps the Incident Command prioritize resources and search areas in the affected zones, as well as keep survey and search-and-rescue teams safe.

The latest version of the software allows users to upload any .png image file to serve as a map symbol. This feature provides critical information to responders in a customizable and easily interpreted way. Notice in the screen shot of the MARPLOT map below that the locations of safe rooms, E911 address points, and residences of oxygen-dependent and mobility-impaired persons are clearly identified by specific symbols. The user can select any map symbol and see an associated information box displayed for that symbol.

In MARPLOT, any square of the grid can be selected and "searched" for information associated with that area of the map, which is then displayed in the latest version of MARPLOT as a "spreadsheet." This spreadsheet can be printed and given to the teams surveying impacted areas. Below is an example of an information spreadsheet for E911 address points in a selected one-square-mile grid zone (Grid Box 2, 4). 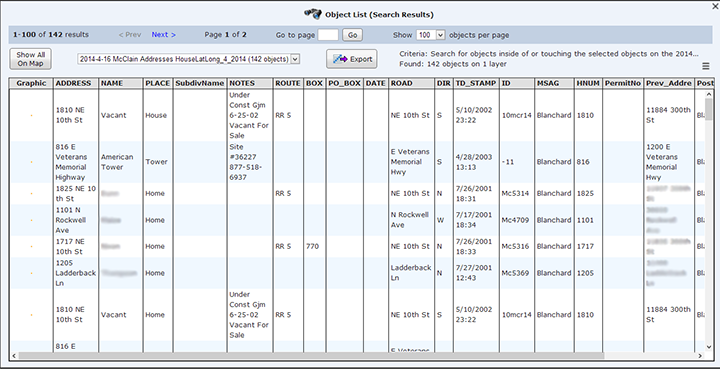 Address points in the selected Grid Box 2, 4, displayed as a spreadsheet in MARPLOT 5 which responders can print out and take on surveys of damaged areas. (NOAA)

With this feature, emergency responders have the information they need contained in both a map and a spreadsheet as they conduct their initial damage survey. In this example, responders assigned to survey Grid Box 2, 4 already know they must clear 142 address points in the area, six of which have safe rooms, two of which have mobility-impaired residents, and one with an oxygen-dependent person.

Furthermore, the emergency responders in this scenario were able to accomplish all of these operations in MARPLOT without any access to Internet or cloud servers. And the software is 100 percent free.

This is a very simple example of new ways MARPLOT 5 may be implemented by emergency planners and responders across the country. There are a host of other new operations in version 5—including real-time weather via web mapping service (WMS) access—that could be used for dealing with wildfires, search and rescue operations, floods, hazardous material releases, resource management, manhunts ... In fact, MARPLOT could be used in just about any type of situation where customizable and user-operated mapping might be helpful.

Learn more about and download the latest version of MARPLOT.

Tom Bergman is the author of the CAMEO Companion and host of the www.cameotraining.org website. Tom is the EPCRA (Emergency Planning and Community Right-to-Know Act) Tier 2 Program Manager for the State of Oklahoma and has been a CAMEO trainer for many years. He has conducted CAMEO training courses in Lithuania, Poland, England, Morocco, and 45 U.S. states.