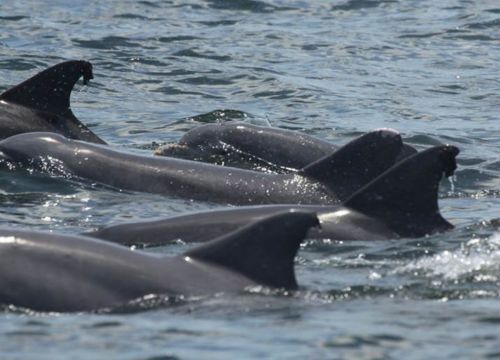 A study published in the journal PLOS ONE found that an unusually high number of dead Gulf dolphins had what are normally rare lesions on their lungs and hormone-producing adrenal glands, which are associated with exposure to oil compounds. (NOAA)

MAY 20, 2015 — What has been causing the alarming increase in dead bottlenose dolphins along the northern Gulf of Mexico since the Deepwater Horizon oil spill in the summer of 2010? Independent and government scientists have found even more evidence connecting these deaths to the same signs of illness found in animals exposed to petroleum products, as reported in the peer-reviewed online journal PLOS ONE. This latest study uncovered that an unusually high number of dead Gulf dolphins had what are normally rare lesions on their lungs and hormone-producing adrenal glands. The timing, location, and nature of the lesions support that oil compounds from the Deepwater Horizon oil spill caused these lesions and contributed to the high numbers of dolphin deaths within this oil spill’s footprint.

"This is the latest in a series of peer-reviewed scientific studies, conducted over the five years since the spill, looking at possible reasons for the historically high number of dolphin deaths that have occurred within the footprint of the Deepwater Horizon spill," said Dr. Teri Rowles, one of 22 contributing authors on the paper, and head of NOAA's Marine Mammal Health and Stranding Response Program, which is charged with determining the causes of unusual mortality events. "These studies have increasingly pointed to the presence of petroleum hydrocarbons as being the most significant cause of the illnesses and deaths plaguing the Gulf's dolphin population," said Dr. Rowles.

A System out of Balance

In this study, one in every three dead dolphins examined across Louisiana, Mississippi and Alabama had lesions affecting their adrenal glands, resulting in a serious condition known as "adrenal insufficiency." The adrenal gland produces hormones—such as cortisol and aldosterone—that regulate metabolism, blood pressure and other bodily functions. "Animals with adrenal insufficiency are less able to cope with additional stressors in their everyday lives," said Dr. Stephanie Venn-Watson, the study's lead author and veterinary epidemiologist at the National Marine Mammal Foundation, "and when those stressors occur, they are more likely to die." Earlier studies of Gulf dolphins in areas heavily affected by the Deepwater Horizon oil spill found initial signs of this illness in a 2011 health assessment of dolphins living in Barataria Bay, Louisiana. 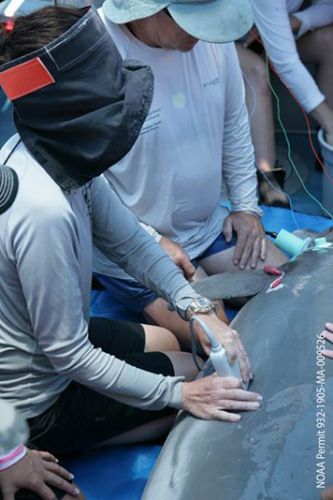 Using ultrasound to examine the lungs of live dolphins in Barataria Bay, Louisiana. "These dolphins had some of the most severe lung lesions I have seen in the over 13 years that I have been examining dead dolphin tissues from throughout the United States," said Dr. Kathleen Colegrove, the study's lead veterinary pathologist based at the University of Illinois.

NOAA scientists Dr. Rowles and Dr. Lori Schwacke spoke about the results of this health assessment in a 2013 interview: "One rather unusual condition that we noted in many of the Barataria Bay dolphins was that they had very low levels of some hormones (specifically, cortisol) that are produced by the adrenal gland and are important for a normal stress response. Under a stressful condition, such as being chased by a predator, the adrenal gland produces cortisol, which then triggers a number of physiological responses including an increased heart rate and increased blood sugar. This gives an animal the energy burst that it needs to respond appropriately. In the Barataria Bay dolphins, cortisol levels were unusually low. The concern is that their adrenal glands were incapable of producing appropriate levels of cortisol, and this could ultimately lead to a number of complications and in some situations even death."

In addition to the lesions on adrenal glands, the scientific team discovered that more than one in five dolphins that died within the Deepwater Horizon oil spill footprint had a primary bacterial pneumonia. Many of these cases were unusual in severity, and caused or contributed to death.

Ultrasounds showing a normal dolphin lung, compared to lungs with mild, moderate, and severe lung disease. These conditions are consistent with exposure to oil compounds and were found in bottlenose dolphins living in Barataria Bay, Louisiana, one of the most heavily oiled areas during the Deepwater Horizon oil spill. (NOAA)

Drs. Rowles and Schwacke previously had observed significant problems in the lungs of dolphins living in Barataria Bay. Again, in 2013, they had noted, "In some of the animals, the lung disease was so severe that we considered it life-threatening for that individual." In other mammals, exposure to petroleum-based polycyclic aromatic hydrocarbons, known as PAHs, through inhalation or aspiration of oil products can lead to injured lungs and altered immune function, both of which can increase an animal's susceptibility to primary bacterial pneumonia. Dolphins are particularly susceptible to inhalation effects due to their large lungs, deep breaths, and extended breath hold times. Learn more about NOAA research documenting the impacts from the Deepwater Horizon oil spill and find more stories reflecting on the five years since this oil spill.