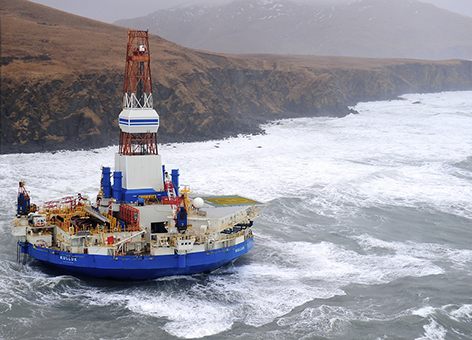 Here you can see the rocky coast and habitats near where the conical drilling unit Kulluk sat aground on the southeast shore of Sitkalidak Island about 40 miles southwest of Kodiak City, Alaska, in 40 mph winds and 20-foot seas on Tuesday, Jan. 1, 2013. (U.S. Coast Guard)

JAN. 11, 2013 — Fortunately, when Royal Dutch Shell's offshore drilling platform, the Kulluk, ran aground on a remote Alaskan island on New Year's Eve, it did not lead to an oil spill. However, the rig held 140,000 gallons of diesel fuel, and throughout the response, the potential for a spill remained a concern. This was especially true because the Kulluk was located in an area with many sensitive natural resources, including harbor seals, marine birds, critical habitat for Steller sea lions, and salmon streams. On top of that, pacific cod and tanner crab harvests take place in that part of Sitkalidak Island, south of Kodiak.

Subsistence foragers from the Old Harbor Native village harvest razor clams from a bed near the grounding site. In light of the potential for an oil spill, restoration specialists from NOAA's Office of Response and Restoration, collaborating with federal and state natural resource trustees, began planning an assessment of the possible harm to natural resources. What if the oil did spill and impact those natural resources? How would we determine what was injured and how badly?

One of the first steps in this planning effort was to consider where the diesel might go if it spilled and what natural resources it might impact. Spill responders—those considering oil cleanup options—often see diesel spills as less of a concern than spills that involve thicker, heavier oils. This is due to the way that diesel acts when it is spilled on the ocean surface; most of it evaporates into the air and disperses into the water in a few hours, especially in high winds and waves. In this case, NOAA scientists estimated that almost all of the Kulluk's diesel would evaporate or disperse in 4–5 hours if it spilled. This means there would be very little oil for cleanup workers to try to recover from the water's surface.

The Kulluk was grounded near shore and, in the event of a spill, the wind and waves would have pushed the diesel towards the shoreline. In this scenario, diesel could have impacted nearby ocean areas, beaches, rocky shorelines, and stream outlets. The Unified Command took precautionary measures during the grounding and removal of the Kulluk, which included placing containment boom across the mouths of streams in the area to keep out any potentially spilled diesel.

Though diesel may not remain for very long in the environment, it is very toxic to many aquatic species. A diesel fuel spill would have had an immediate and negative effect on the environment. In high seas, like those around the grounded Kulluk, as much as 90 percent of the diesel would disperse into the water. The dispersed diesel could affect marine organisms that live in the water column, on the ocean bottom, or along the shoreline. Past spills of comparable fuels in similar marine environments have killed large numbers of organisms living in the water column or on the ocean bottom in the area where the oil was released: the barge North Cape grounded and spilled oil off Rhode Island during bad weather in 1996, and the ship Tampico Maru grounded and spilled diesel on a remote, rough shoreline in Northern Baja California in 1957.

Diesel is acutely toxic to many zooplankton, bivalve, and crustacean species as well as unhatched and young salmon. Organisms can become "tainted" when they are either exposed to diesel at levels that don't kill them (sublethal) or when they eat other organisms exposed to those levels. In that case, responders would test seafood for safety, and those of us evaluating environmental damages would assess marine organisms' exposure levels with additional testing. Even these sublethal exposures can cause toxic effects that need to be considered in a damage assessment. While initially preparing for a potential damage assessment, we focused on planning for water, sediment, and bivalve (razor clams and blue mussels) sampling as well as on planning shoreline assessments for evidence of injured or dead animals. If we could do this sampling before and/or immediately after a spill, we would have a more accurate assessment of damages to natural resources. Assessing exposure and injury to natural resources is time sensitive, especially in the case of a short-lived contaminant like diesel. 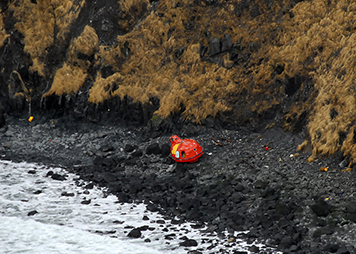 However, the far-flung location of the grounding site, as well as the harsh weather conditions, would make sampling in the area challenging. Our planning had to address those logistical challenges. That meant having resources and personnel standing by 40 miles away in Kodiak City, Alaska; arranging for transportation to the site of the rig; securing permission to access the area, and procuring the resources we needed to sample. Given the conditions, accessing the site would have required a helicopter or boat trip to the island and overland transit through grizzly bear habitat, across rough terrain, and private property.

Again, we're happy that the diesel aboard the Kulluk stayed in its tanks while the rig was grounded and moved off of Sitkalidak Island. But new opportunities for oil drilling, commerce, and tourism in the Arctic are expected to bring more marine traffic through these areas. That creates more opportunities for accidents. It is important for us to be prepared to undertake a natural resource damage assessment in the event of an oil spill. Understanding what is at risk, what to expect from the particular oil spilled, and how it all fits in a specific environment is the first step.