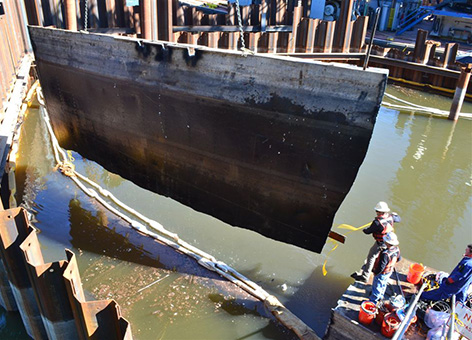 On July 7, 2011, part of one of the cargo holds of the derelict vessel (but one-time Navy Liberty Ship) Davy Crockett is lifted from the waters of the Columbia River. (Washington Department of Ecology)

FEBRUARY 26, 2014 -- One of the largest vessel removal efforts in Washington history was a former Navy Liberty Ship, the Davy Crockett.

In 2011 the Davy Crockett, previously abandoned by its owner on the Washington shore of the Columbia River, began leaking oil and sinking due to improper and unpermitted salvage operations.

Its cleanup and removal cost $22 million dollars, and the owner was fined $405,000 by the Washington Department of Ecology and sentenced to four months in jail by the U.S. Attorney, Western District of Washington.

As we have mentioned before, derelict and abandoned vessels like the Davy Crockett are a nationwide problem that is expensive to deal with properly and, if the vessels are left to deteriorate, can cause significant environmental impacts.

Unfortunately Washington's Puget Sound is no exception to this issue.

The NOAA Office of Response and Restoration's LTJG Alice Drury is part of the Derelict Vessel Task Force led by U.S. Coast Guard Sector Puget Sound. Made up of federal, state, and local agencies, this task force aims to identify and remove imminent pollution and hazard-to-navigation threats from derelict vessels and barges within Puget Sound. Among these agencies there are different jurisdictions and enforcement mechanisms related to derelict vessels.

A key player is Washington's Department of Natural Resources (WA DNR), which manages the state Derelict Vessel Removal Program (DVRP). The DVRP has limited funding for removal of priority vessels. Unfortunately, according to WA DNR [PDF], with the growing number and size of problem vessels, program funding can’t keep up with the rising removal and disposal costs. The backlog of vessels in need of removal continues to grow.

LTJG Drury is working with the NOAA Office of Response and Restoration's Spatial Data Branch to enter this list of derelict vessels into ERMA®. ERMA is a NOAA online mapping tool that integrates both static and real-time data to support environmental planning and response operations. Right now the vessels are primarily tracked in the WA DNR DVRP database. By pulling this data into ERMA, the task force will not only be able to see the vessels displayed on a map but also make use of the various layers of environmental sensitivity data already within ERMA. The hope is that this can help with the prioritizing process and possibly eventually be used as a tool to raise awareness. 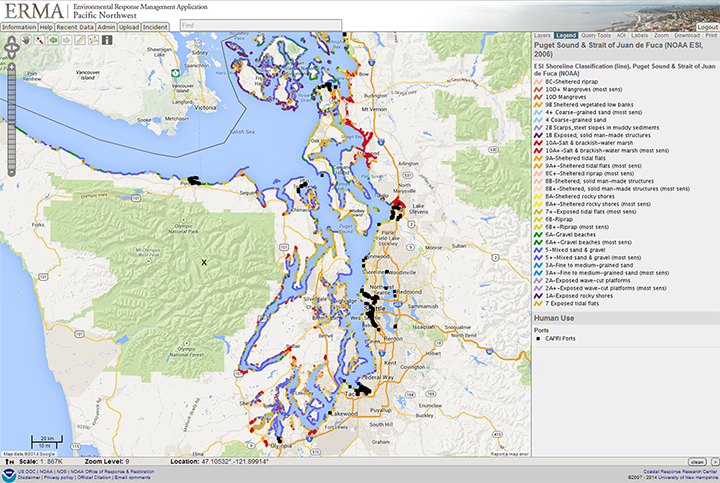 A view of Pacific Northwest ERMA, a NOAA online mapping tool which can bring together a variety of environmental and response data. Here, you can see the black dots where ports are located around Washington's Puget Sound as well as the colors indicating the shoreline's characteristics and vulnerability to oil. (NOAA)

However, there aren't enough resources within the Derelict Vessel Task Force to gather and continue to track (as the vessels can move) all the data needed in order to map the vessels accurately in ERMA. As a result, the task force is turning to local partners in order to help capture data. 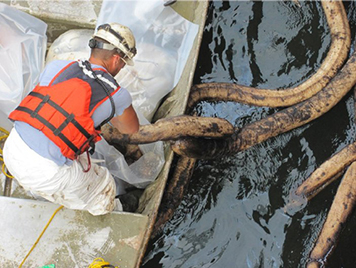 A worker removing oiled sorbent material from inside the cofferdam that surrounded the Davy Crockett during the ship's salvage and removal. September 13, 2011. (Washington Department of Ecology)

One such partner is the local Coast Guard Auxiliary Flotillas, a group of dedicated civilians helping the Coast Guard promote safety and security for citizens, ports, and waterways. In order to garner support for data-gathering, she recently attended the USCG Auxiliary Flotilla Seattle-Elliott Bay meeting, along with members of the local Coast Guard Incident Management Division who head the Puget Sound Derelict Vessel Task Force.

LTJG Drury spoke about a few local derelict vessel incidents and their impacts to the environment. She also showed how ERMA can be a powerful tool for displaying and prioritizing this information—if we can get the basic data that’s missing. As a result, this Flotilla will follow up with the Coast Guard and start collecting missing information on derelict and abandoned vessels on behalf of the Coast Guard and WA DNR.

You can see a U.S. Coast Guard video of the start-to-finish process of removing the Davy Crockett from the Columbia River along with the Washington Department of Ecology's photos documenting the response.