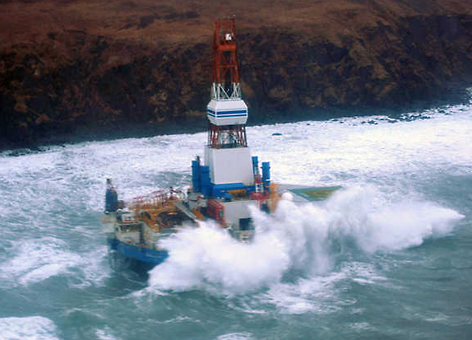 Waves crash over the mobile offshore drilling unit Kulluk where it sits aground on the southeast side of Sitkalidak Island, Alaska, Jan. 1, 2013. (U.S. Coast Guard)

UPDATED JAN. 4, 2013 — The mobile drilling unit Kulluk, Shell Oil’s 266-foot-long floating drill rig, has run aground off the coast of Kodiak Island, Alaska, after encountering severe weather while being towed from Dutch Harbor, Alaska. NOAA’s Office of Response and Restoration is supporting the U.S. Coast Guard in its response to the grounding.

Two tugboats were towing the Kulluk from where it was drilling in the Beaufort Sea south to Seattle, Wash., for winter maintenance when beginning on December 28 the tugs suffered engine trouble and lost connection to the rig in heavy weather and seas approximately 25 miles south of Kodiak Island. The towlines were temporarily reestablished. However, as the towing vessels were guiding the Kulluk to a place of refuge at the west end of Sitkalidak Strait, approximately 20 miles away, stormy weather caused the main tug to lose its connection again and the rig was allowed to drift aground in heavy seas.

Our Scientific Support Coordinator for Alaska is providing modeling products to the Coast Guard in case the approximately 140,000 gallons of diesel fuel aboard the rig start to leak out. He also has been coordinating custom local weather forecasts with the National Weather Service and has participated in one of several aerial surveys of the grounded rig. We have sent an information management specialist to assist at the incident command post in Anchorage, Alaska, and have been gathering data as it becomes available into Arctic ERMA, NOAA’s online GIS tool for environmental disaster response.

As of the evening of January 2, the response has completed a partial assessment of the condition of the rig and fuel tanks, which was hampered by inclement conditions. No leaking oil has been sighted, and the drilling rig appears intact where it grounded near the rocky shoreline. The next step is to finish the assessment and plan to remobilize the rig. Of note is the fact that the shores of Kodiak Island, where the rig grounded, fall within critical habitat for the endangered Steller sea lion. 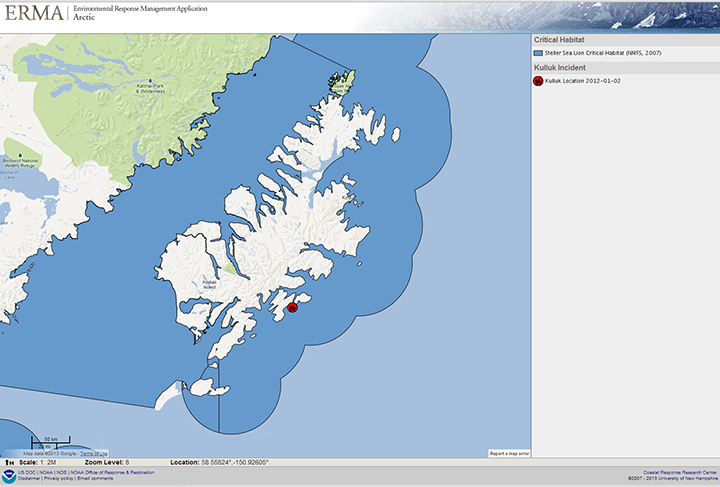 View from Arctic ERMA showing the location of the drilling rig Kulluk aground on Sitkalidak Island, Alaska, and critical habitat for Steller sea lions. Click to enlarge.

State and federal agencies have been evaluating harm to natural resources from a potential release of diesel fuel from the Kulluk. The rig is located close to two salmon streams, an area where razor clams are harvested for subsistence use, and a planned tanner crab fishery expected to open on January 15. Sampling clams, sediment, and water around the rig would allow NOAA to evaluate harm if fuel would be released and possibly contaminated the surrounding area. However, because the area is remote, traveling there to perform these samples would be challenging. For official updates from the Unified Command for this incident, visit https://www.piersystem.com/go/site/5507/ and https://twitter.com/KullukResponse.