From Rubber Ducks to Dog Food, Spilling Everything But Oil 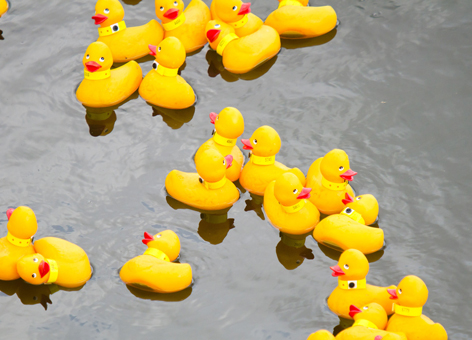 MARCH 22, 2013 — What do rubber duckies, dog food, oranges, wood chips, green dye, hula hoops, peat moss, popcorn, and rice hulls have in common? All have been used to mimic the behavior of spilled oil. These materials are used because in the U.S. dumping oil in the ocean is prohibited, even if it is done intentionally for training, experimental, or testing purposes.

Tank testing has been an alternative, and we use real oil in test tanks such as the one at Ohmsett (an oil spill response and research testing facility in New Jersey), but there are questions about how well these tanks simulate real world conditions, including rough seas, currents, and waves. That means there is a real need for materials that both realistically mimic oil behavior and are safe for use in the environment. They allow us to test computer models, such as NOAA’s GNOME oil forecasting model, and to improve how containment booms and other response tactics work.

On March 21, 2013, experts from around the country gathered at NOAA offices in Seattle, Wash., to discuss the need and best options for oil spill simulants. What alternatives are best? What are the environmental effects of those simulants? What permits are needed? And most importantly, how similar is the behavior compared with real oil? One of the preliminary conclusions from this meeting is that oil behavior is difficult to emulate, and all of the existing simulants have drawbacks.

Stay tuned for a future story about progress in this area, and in the meantime, if you notice a bunch of oranges (or grapefruits or lemons) floating in the water, you may be seeing a test of oil spill preparedness like this one in Florida: Coast Guard, partnering agencies conduct Tidal Inlet Protection Strategy exercise. 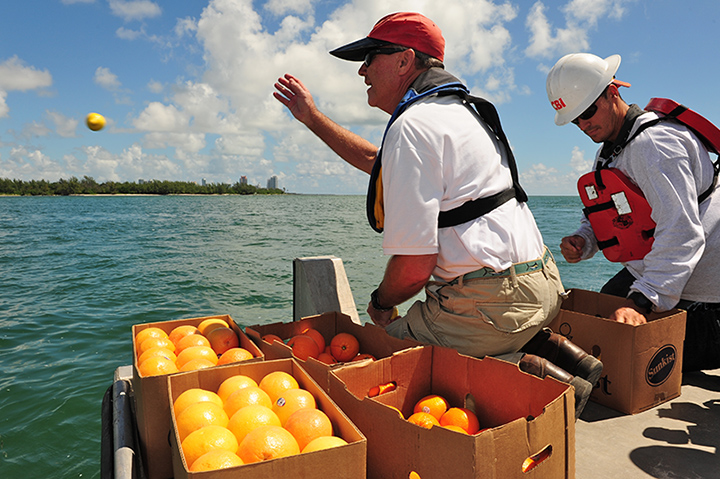 In August of 2012, the U.S. Coast Guard and partnering agencies conducted an exercise aimed at testing the ability to protect Biscayne Bay (Florida) from offshore oil and involved deploying approximately 7,500 feet of boom and 240 pieces of surrogate oil or fruit, including grapefruits, oranges, and lemons across the channel. (U.S. Coast Guard) 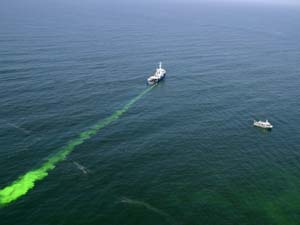