Sandy, One Year Later: Where Are We Now?

OCTOBER 29, 2013 -- At the end of October 2012, Hurricane Sandy raced toward the east coast. Although the hurricane became a post-tropical cyclone before making landfall, it still caused extensive damage.

Its forceful winds and flooding swept waves of oil, hazardous chemicals, and debris into the waters along New Jersey, New York, and Connecticut.

Both before and after Sandy hit, NOAA's Office of Response and Restoration (OR&R) was bracing for the repercussions of this massive storm.

In the year since, we have been working with federal, state, and local agencies to reduce the environmental impacts, restore coastal habitats, and improve the tools needed to prepare for the next disaster.

As water levels receded, the U.S. Coast Guard began receiving reports of pollution in the areas of coastal New Jersey and New York. Petroleum products, biodiesel, and other chemicals were leaking into the waters from pollution sources such as damaged coastal industries, ruptured petroleum storage tanks, and sunken and stranded vessels.

The area of Arthur Kill, a waterway that borders New York and New Jersey, was hit particularly hard. One such spill occurred when a tank holding diesel broke open at the Motiva refinery in Sewaren, N.J., releasing an estimated 336,000 gallons of diesel into several creeks.

The week following Sandy, our Damage Assessment, Remediation, and Restoration Program (DARRP) staff ventured into storm-ravaged areas to gather data on impacts to coastal habitats and other natural resources, including those potentially affected by the Motiva oil spill. NOAA, along with representatives from the New Jersey Department of Environmental Protection and Motiva, surveyed affected sites both by land and by boat and coordinated with these groups to determine whether to pursue a natural resource damage assessment and implement environmental restoration.

Early in this process, the trustees, NOAA and New Jersey, and Motiva agreed to focus on restoration, rather than conducting new studies and debating legal issues. This meant using observations from the surveys, past damage assessments in the area, and previous scientific studies to determine the amount of restoration required to offset the resulting injuries to natural resources.

As a result, NOAA and New Jersey reached consensus on a cooperative settlement in less than 6 months with the Motiva refinery in Sewaren for the release of oil during the storm. This successful agreement will provide funds to restore and monitor recovery of tidal wetlands in the Arthur Kill watershed, which will begin before the end of 2013.

Identifying Remaining Debris Along the Coasts 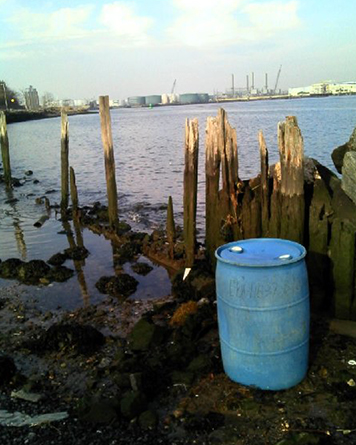 Drums and other debris were washed away into the ocean and surrounding waters following Sandy and in some cases continue to be a threat to safety and the environment. (U.S. Environmental Protection Agency)

Even when drums, tanks, and other debris swept into the waters after a storm are free of oil and chemicals, they can still pose a threat to navigation, commercial and recreational fishing grounds, and sensitive habitats. This was a considerable problem after Hurricane Katrina in 2005, and Sandy was no exception in 2012.

In the months following this storm, the NOAA Marine Debris Program coordinated debris response activities and initial assessments with agencies in impacted states. Using aerial, underwater, and shoreline surveys, today we continue working with federal and state agencies to identify the amount and location of remaining debris that Sandy littered up and down Mid-Atlantic coastal waters.

In addition, we are using a computer model we developed with NOAA's Office of Coast Survey after Hurricane Katrina to predict probabilities of finding debris generated by Sandy in the nearshore waters of New Jersey, New York, and Connecticut. These and other analyses, along with support from the rest of the Marine Debris Program and OR&R's Atlantic ERMA mapping tool, will inform how states prioritize cleanup efforts.

Due to the Disaster Relief Appropriations Act of 2013, the Marine Debris Program received $4.75 million for activities related to finding and clearing debris from Sandy. Through the end of 2013 and into 2014, we will continue our work identifying priority items for removal and supporting limited removal efforts. The program is also using what we learned from Sandy to establish long-term debris recovery plans for future storms.

Adapting to a Changing Shoreline

As a result, OR&R's Emergency Response Division received funding through the Disaster Relief Appropriations Act of 2013 to update our Environmental Sensitivity Index (ESI) maps for northeast states. These updated maps will reflect the shoreline changes caused by the storm but will be developed with a broad range of potential disasters in mind.

Additionally, they will expand the coastal information offered to better inform planning and response efforts for the next disaster. Such information may include flood inundation and storm surge areas, environmental monitoring stations, tide stations, and offshore renewable energy sites. Long Island Sound is first on our list for updates, but the Hudson River, Chesapeake Bay, and affected shorelines from South Carolina north to Maine eventually will follow suit.

While it has already been a year since Sandy left its mark on the U.S., the work of recovery and rebuilding is not yet complete. You can read more about these efforts in support of healing our coasts and communities on NOAA's Ocean Service website. 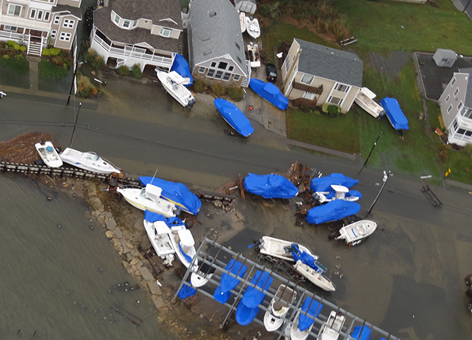 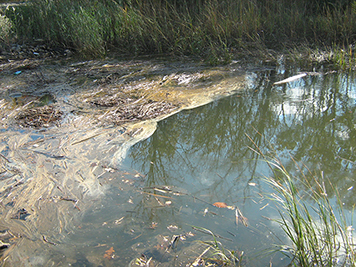 Oil mixed with vegetation and organic debris in the tidal marshes affected by the Motiva refinery's diesel spill as a result of the storm. (NOAA)
Back to top