FEBRUARY 17, 2015 -- On March 18, 1937, a gas explosion occurred in a school in New London, Texas, killing almost 300 of the 500 students and 40 teachers in the building. The brand new, steel-and-concrete school, located in the East Texas Oilfield, was one of the wealthiest in the country. Yet it was reduced to rubble in part because no one could smell the danger building in the basement. While the building originally had been designed for a different heat distribution system, school officials had recently approved tapping into a residue gas line of the local Parade Gasoline Company, a common money-saving practice in the oilfield at the time. Unfortunately, on that March afternoon, a faulty pipe connection caused the gas (methane mixed with some liquid hydrocarbons) to leak into a closed space beneath the building. Just before class dismissal, when a maintenance employee turned on an electric sander, the odorless gas ignited. The resulting explosion caused the building to collapse, burying victims. (Watch a video of a news reel covering the event from March 1937.) By standards employed today, a gas leak could be detected in advance by its odor. The odorless gas in the New London disaster was able to accumulate in the space before anyone was aware of it. As a direct result of this incident, a Texas law mandated that malodorants be added to all natural gas for commercial and industrial use, a practice that is now an industry standard. Mercaptan, a harmless chemical, gives gas its distinctive rotten egg odor. It is added to natural gas to make it quickly recognizable and to prevent accidents like this from happening. As a firefighter at the beginning of his career in Beaumont, Texas, Derwin Daniels worked for the same fire company that responded many years ago to the 1937 explosion. His personal connection to this particular incident sparked a desire to further his career in the fields of emergency management and fire protection technology. 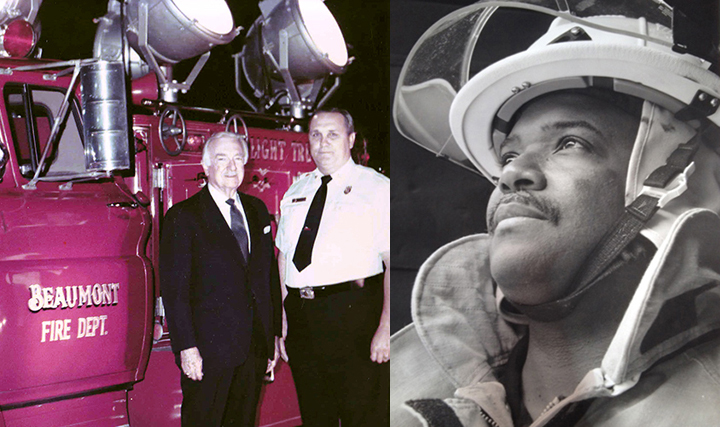 Walter Cronkite reported on the New London, Texas, disaster early in his career. Left, he poses many years later in front of the light truck that served at the Beaumont Fire Department response to the 1937 disaster. The bed of the truck, including the lights, is original; the cab was replaced in 1955. (Used with permission of the Fire Museum of Texas Collection, Beaumont, Texas) Right, Derwin Daniels previously worked at the Beaumont Fire Department in Beaumont, Texas, which long ago responded to the 1937 disaster in New London. (Photo: Derwin Daniels)

Derwin Daniels brought his expertise to the NOAA Gulf of Mexico Disaster Response Center to coordinate training activities in emergency response. Daniels has been developing a "First Responder Awareness Level Training" that will provide NOAA staff with better understanding of potential hazards that they might encounter during post-disaster emergency response and recovery activities. The training will help staff better assess an emergency situation so they can notify appropriate authorities. As part of this training, students consider real scenarios such as the New London explosion to learn important lessons about responding to disasters, a technique Daniels likes to use whenever possible. 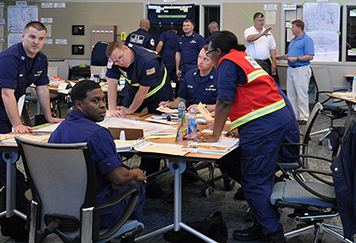 The Disaster Response Center brings together NOAA-wide resources to improve preparedness, planning, and response capacity for natural and human-caused disasters along the Gulf Coast. As part of that mission, the center regularly provides training on a variety of emergency response-related topics throughout the year. (NOAA)

For example, a section of this course covers "Odor Thresholds" and "Dimensions of Odor." This involves human senses as it relates to hazardous materials. Taste, touch, smell, sight, and sound are all valuable tools for detecting the presence of harmful materials. The New London school explosion and the changes that resulted illustrate to students the role of odor in assessing possible causes of a disaster, such as a chemical release or explosion. Drawing on lessons from past incidents brings context to modern practices. One of the DRC's many roles is developing and delivering training to NOAA personnel as well as federal, state, and local partners to promote better disaster preparedness in the Gulf region. Learn more about the NOAA Gulf of Mexico Disaster Response Center. 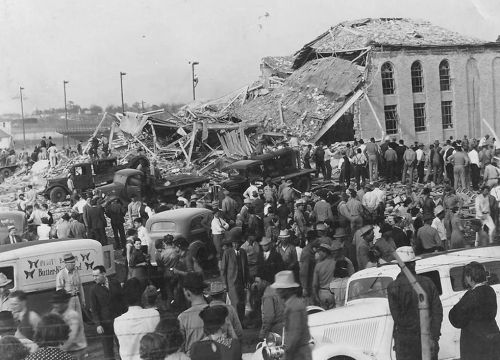 Accident site at the school in New London, Texas, soon after the explosion that occurred at 3:05 in the afternoon on March 18, 1937. (London Museum in New London/AP)
Back to top