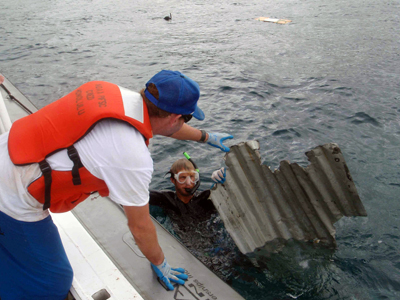 A diver retrieves a piece of debris from the tsunami that hit Japan in 2011. (NOAA)

UPDATE (APRIL 30, 2012): Updated NOAA models show that some very buoyant items of debris from the tsunami are already arriving on the U.S. and Canadian West Coast. Read more about two such sports balls that crossed the Pacific Ocean to Alaska are finding their way back to their Japanese owners.

JANUARY 23, 2012 — Debris from the tsunami that devastated Japan in March could reach the United States as early as this winter, according to predictions by NOAA scientists.

However, they warn there is still a large amount of uncertainty over exactly what is still floating, where it's located, where it will go, and when it will arrive.

Responders now have a challenging, if not impossible situation on their hands: How do you deal with debris that could now impact U.S. shores, but is difficult to find?

To learn more about the tsunami debris, NOAA researchers have been working with the U.S. Environmental Protection Agency, U.S. Fish and Wildlife Service, and other partners to coordinate data collection activities.

NOAA and its partners are also coordinating an interagency assessment and response plan to address the wide-range of potential scenarios and threats posed by the debris.

"We're preparing for the best and worst case scenarios -- and everything in between," says Nancy Wallace, director for NOAA's Marine Debris Program.

As the tsunami surge receded, it washed much of what was in the coastal inundation zone into the ocean. Boats, pieces of smashed buildings, appliances, and plastic, metal, and rubber objects of all shapes and sizes washed into the water — either sinking near the shore or floating out to sea. The refuse formed large debris fields captured by satellite imagery and aerial photos of the coastal waters.

The Japanese government estimated that the tsunami generated 25 million tons of rubble, but there is no clear understanding of exactly how much debris was swept into the water nor what remained afloat. 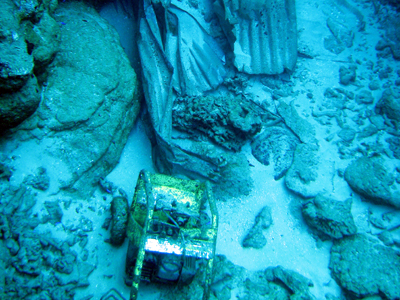 Debris from the tsunami that hit Japan in 2011 lies on the ocean floor. (NOAA)

What Remains of the Debris?

Nine months later, debris fields are no longer visible. Winds and ocean currents scattered items in the massive North Pacific Ocean to the point where debris is no longer visible from satellite. Vessels regularly traveling the North Pacific have reported very few sightings. Only two pieces have been clearly linked to the tsunami.

NOAA is coordinating new interagency reporting and monitoring efforts that will provide critical information on the location of the marine debris generated by the tsunami. Ships traveling the Pacific Ocean and beachcombers on the coast can now report significant sightings. If reporting a sighting, be sure to include what you saw, when you saw it, and where it was located. Individuals or groups can also request shoreline monitoring guides at MD.monitoring@noaa.gov.

Computer models run by NOAA and University of Hawaii researchers show some debris could pass near or wash ashore in the Northwestern Hawaiian Islands (in the Papahānaumokuākea Marine National Monument) as early as the winter of 2011-2012, approach the West Coast of the United States and Canada in 2013, and circle back to the main Hawaiian Islands in 2014 through 2016.

Researchers caution that models are only predictions based on location of debris when it went into the water, combined with historical ocean currents and wind speeds.

Conditions in the ocean constantly change, and items can sink, break down, and disperse across a huge area. Because it is not known what remains in the water column nor where, scientists can’t determine with certainty if any debris will wash ashore.

The worst-case scenario is boats and unmanageable concentrations of other heavy objects could wash ashore in sensitive areas, damage coral reefs, or interfere with navigation in Hawaii and along the U.S. West Coast. Best case? The debris will break up, disperse and eventually degrade, sparing coastal areas.

Debris will not go away completely, even in a best-case scenario. Marine debris is an ongoing problem for Hawaii and West Coast states, where garbage and other harmful items regularly wash up on beaches, reefs and other coastal areas.

What Else Is NOAA Doing?

NOAA has convened experts to review available data and information from models and provide their perspectives on debris fate and transport. They are gathering information on significant sighting of marine debris in the North Pacific through NOAA's Office of Marine and Aviation Operation's Pacific fleet, the NOAA Voluntary Observing Ship Program, which includes industry long-haul transport vessels, as well as the NOAA Pacific Island Regional Observer Program and their work with the Hawaii longline fishing industry. NOAA is also working with the U.S. Fish and Wildlife Service and the State of Hawaii on shoreline debris monitoring in the Papahānaumokuākea Monument.

From the Response and Restoration Blog

Check out our blog, where you can watch a short video and listen to a podcast for more perspectives on NOAA's work and what you can do: Help NOAA Track Marine Debris from the Japanese Tsunami.