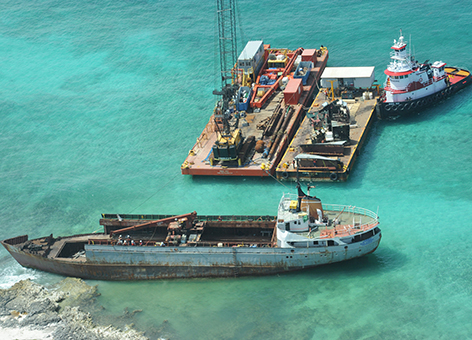 AUG. 28, 2012 — With the passage of the Tropical Storm formerly known as Hurricane Isaac, salvage crews and coral ecologists are once again back on Mona Island, Puerto Rico, working to remove the grounded freighter M/V Jireh while also protecting the island's corals. In previous ship salvage cases involving coral habitats, biologists have observed considerable coral damage from not only the physical placement of anchors, cables, and support vessels, but also continued shifting and grinding from the grounded vessel.

As a result, crews are working carefully to keep that from happening here. In such a long and complicated salvage project, it is impossible to prevent all impacts, but crews are continuing to remove and reattach corals at risk from the grounded ship. Nearly 1,000 corals have been moved already. These transplanted corals are expected to have a high survival rate and reduce the overall impacts from the vessel removal operation. A NOAA-authorized biologist is on site during all coral relocation operations to make sure corals are properly handled and reattached to reefs.

Before responders attempt to refloat the vessel, qualified divers will evaluate the corals in the area and determine an exit path for the damaged ship that will have the least impact to the surrounding coral habitat. This may or may not turn out to be the same path the ship took when it entered the reef. Depending on conditions after the vessel's removal, the coral colonies may be relocated back to their original place on the reef. The U.S. Coast Guard and the rest of the response crew have been working carefully to cut up portions of the ship, in order to lighten the vessel enough to refloat and remove it from the reef. Once disassembled, the removed portions of the ship are loaded onto a barge and taken to Puerto Rico for recycling. Additionally, since the grounding on June 21, crews already have removed 600 tons of oiled cargo and more than 5,000 gallons of oil-water mixture. 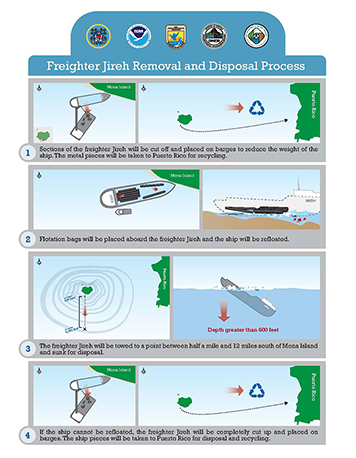 In the diagram at right, you can see their plan for removing and disposing of this damaged vessel. Once the ship is refloated, the plan is to scuttle (purposefully sink) the wreck 12 miles away from Mona Island. After it is sunk, the wreckage is not expected to pose any additional risk to corals or other marine life. The difference with this shipwreck is the location.

"Intertidal wrecks are unstable and scour the reefs as they degrade and fall apart, while a wreck far out at sea becomes a stable deep-water habitat over time," said Doug Helton, Incident Operations Coordinator for the Office of Response and Restoration.

The Coast Guard reports that removing the Jireh from Mona Island is the best solution to protect the sensitive environment and coral reefs surrounding this highly valuable natural reserve. Once this threat is permanently removed, NOAA divers will conduct an assessment of the grounding area and continue to work with local environmental agencies to ensure its full recovery. 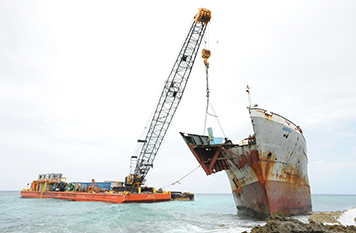 Aug. 18, 2012 -- Sections of the Jireh's hull are removed to lighten the vessel before it is attempted to be refloated and eventually sunk in deep water. (U.S. Coast Guard/Jaclyn Young)
Back to top