For Alaska's Remote Pribilof Islands, a Tale of Survival and Restoration for People and Seals

MARCH 10, 2015 -- Set in the middle of Alaska's Bering Sea, a string of five misty islands known as the Pribilof Islands possess a long, rich, and at times, dark history. A history of near extinction, survival, and restoration for both people and nature. A history involving Alaska Natives, Russians, the U.S. government and military, and seals. It begins with the native people, known as the Unangan, who live there. They tell a story that, as they say, belongs to a place, not any one person. The story is of the hunter Iggadaagix, who first found these islands many years ago after being swept away in a storm and who wanted to bring the Unangan back there from the Aleutian Islands. When the Unangan finally did return for good, it was in the 18th century, and their lives would become intimately intertwined with those of the northern fur seals (Callorhinus ursinus). Each summer roughly half of all northern fur seals breed and give birth in the Pribilof Islands. But these seals and their luxurious fur, along with the tale of Iggadaagix, would eventually bring about dark times for the seals, the Unangan, and the islands themselves. After hearing of Iggadaagix and searching for a new source of furs, Russian navigator Gavriil Loginovich Pribylov would land in 1786 on the islands which would eventually bear his name. He and others would bring the Unangan from the Aleutian Islands to the Pribilof’s St. George and St. Paul Islands, where they would be put to work harvesting and processing the many fur seals. In these early years on the islands, Russian hunters so quickly decimated the fur seal population that the Russian-American Company, which held the charter for settling there, suspended hunting from 1805 to 1810. The annual limit for taking fur seals was then set at 8,000 to 10,000 pelts, allowing the population to rebound significantly.

The United States Arrives at the Islands

Fast forward to 1867, when the United States purchased Alaska, including the Pribilof Islands, from Russia for $7.2 million. Some people considered the lucrative Pribilof Islands fur seal industry to have played a role in this purchase. In fact, this industry more than repaid the U.S. government for Alaska’s purchase price, hauling in $9,473,996 between 1870 and 1909. The late 19th and early 20th centuries saw various U.S. military branches establish stations on the Pribilof Islands, as well as several (at times unsuccessful) attempts to control the reckless slaughter of fur seals. From 1867 until 1983, the U.S. government managed the fur seal industry on the Pribilof Islands. In 1984, the Unangan finally were granted control of these islands, but the government had left behind a toxic legacy from commercial fur sealing and former defense sites: hazardous waste sites, dumps, contaminants, and debris.

Making Amends with the Land

This is where NOAA comes into the picture. In 1996, the Pribilof Islands Environmental Restoration Act called on NOAA to restore the environmental degradation on the Pribilof Islands. In particular, a general lack of historical accountability on the islands had led to numerous diesel fuel spills and leaks and improperly stored and disposed waste oils and antifreeze. By 1997 NOAA had removed thousands of tons ofold cars, trucks, tractors, barrels, storage tanks, batteries, scrap metal, and tires from St. Paul and St. George Islands. Beginning in 2002, NOAA’s efforts transitioned to cleaning up soil contamination and assessing potential pollution in groundwater. However, the Department of Defense has also been responsible for environmental cleanup at the Pribilof Islands. The U.S. Army occupied the islands during World War II and left behind debris and thousands of fifty-five-gallon drums, which were empty by 1985 but had previously contained petroleum, oils, and lubricants, which could have leaked into the soil. By 2008, NOAA’s Office of Response and Restoration had fulfilled its responsibilities for cleaning up the contamination on the Pribilof Islands, closing a dark chapter for this remote and diverse area of the world and hopefully continuing the healing process for the Unangan and fur seals who still call these islands their home.

Learn More about the Pribilof Islands

You can dig even deeper into the wealth of historical information about the Pribilof Islands at pribilof.noaa.gov. There you can find histories, photos, videos, and documents detailing the islands’ various occupations, the fur seal industry, the relocation of the Unangan during World War II, the environmental contamination and restoration, and more. You can also watch: 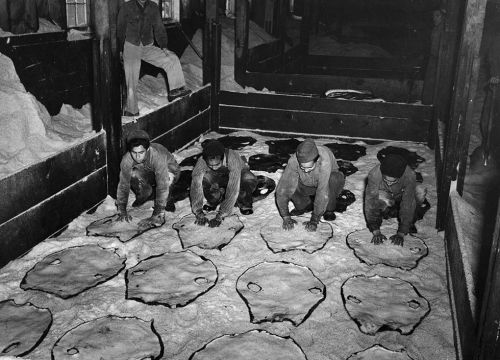 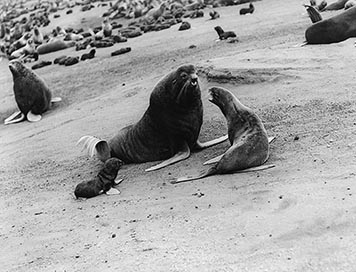