Assessment of Sunken Liberty Ship Completed in Gulf of Mexico 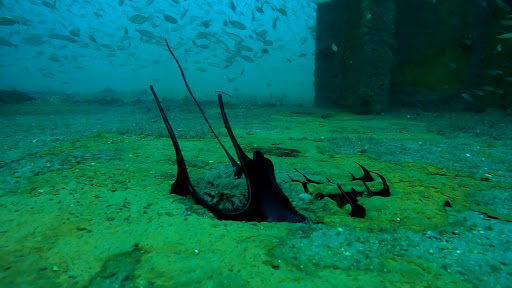 Beginning back in September 2020, reports received by the USCG, Okaloosa County Sheriff’s department, and a local dive company indicated an intermittent dark oil discharge from the bow of the vessel. The vessel had significant damage, believed to have been caused by Hurricane Sally, which impacted the area September 13-16, 2020. At the request of the USCG, OR&R began providing scientific support regarding risk assessment, resources at risk, and trajectory analysis for a potential release.

A NOAA Marine Pollution Surveillance Report (MPSR) was issued for the location in September 2020, indicating a discharge from the vessel coinciding with the passage of Hurricane Sally. Upon receipt of the county dive assessment and video footage of the release, the USCG opened the Oil Spill Liability Trust Fund to conduct a more thorough investigation of the site and take appropriate action to mitigate the pollution source. The positive satellite report (MPSR) and oil sample analysis confirmed the discharge was oil.

The assessment included multibeam and side scan sonar, as well as dive operations on the vessel. The locations of all tanks were investigated and high points to each tank were tapped to determine if oil was present. Non-recoverable amounts of oil were observed on the ocean surface in the vicinity of the vessel and trace amounts were found in the damaged bow section during the assessment. The trace amount of oil is thought to be related to the location of the previously observed intermittent discharge. No recoverable oil was discovered and all tanks were determined to be empty or damaged. Operations were completed and all crew have departed from the site.

A follow-up report is being drafted by the USCG and will be delivered to all local stakeholders and relevant state and federal agencies.

To learn more about historic wrecks that have the potential to discharge oil, see these resources: 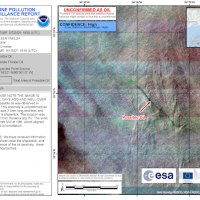 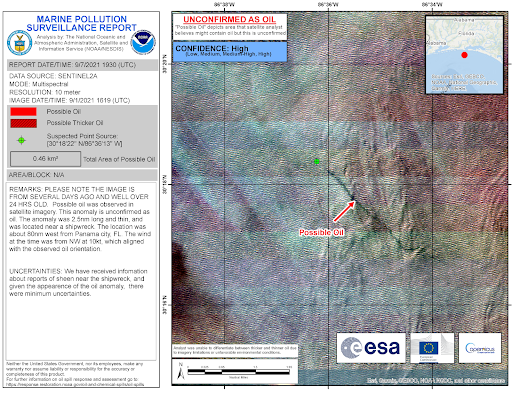