CAFE is database software that you use to estimate the fate and effects of a chemical, oil, dispersant, or dispersant mixed with oil. This page provides information to help you use CAFE.

In the Aquatic Fate module of CAFE, you can find fate data for chemicals in three sub-modules: 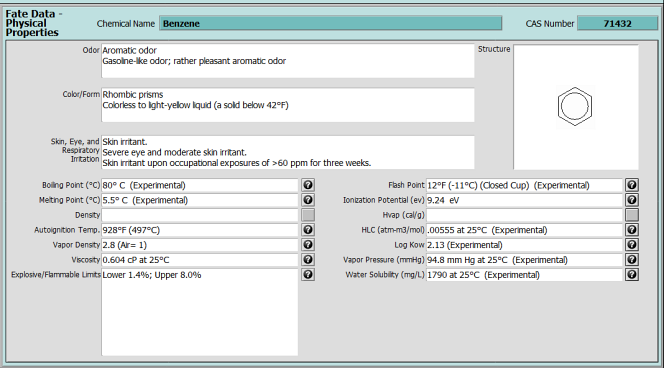 In this example, the Structure and Physical Properties sub-module shows the chemical properties of the chemical benzene and its structure (top right). [View a larger version.] 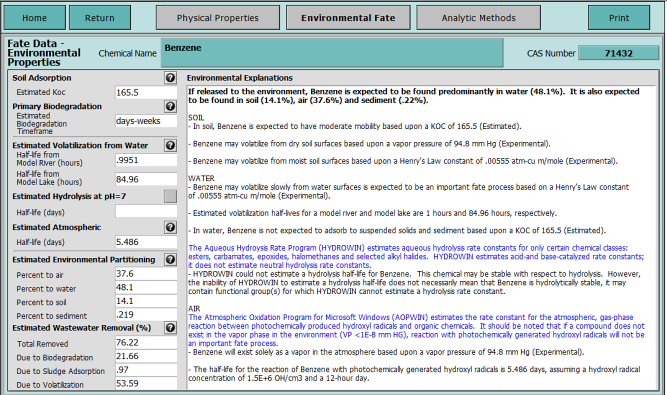 In the Aquatic Effects (Toxicity) module, you can find toxicity data for chemicals, oils, dispersants, or dispersant-oil mixtures. CAFE displays the toxicity data in the form of Species Sensitivity Distribution (SSD) curves.

With each step, you can see what data are available in CAFE by reviewing a toxicity grid, and then make your selections. 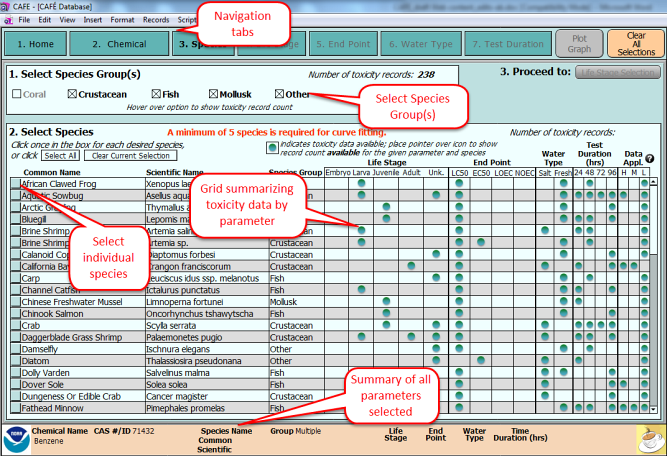 This example shows the Species step of an example query. You would first select Species Group(s), then select individual species. You can see what data are available in CAFE by reviewing the toxicity grid (at right). A summary of all parameters selected is displayed (bottom). [View a larger version.]

After you have completed all the steps, CAFE produces a Species Sensitivity Distribution (SSD) curve based on your selections. SSD curves are generated using the geometric mean of toxicity values (e.g., EC50, LC50) by species, requiring a minimum of five species per curve. SSD curves rank each species from most to least sensitive. The background colors represent the relative toxicity of each data point. Species listed towards the left of the curve (red zone) are more sensitive than species listed towards the right of the curve (green zone).

The estimated fifth and first percent hazard concentration values (HC5 and HC1) are displayed for each curve and are used as conservative benchmarks under the assumption that these would be protective of 95 percent and 99 percent, respectively, of the species on the distribution. These HC5 and HC1 values are derived from each SSD curve. 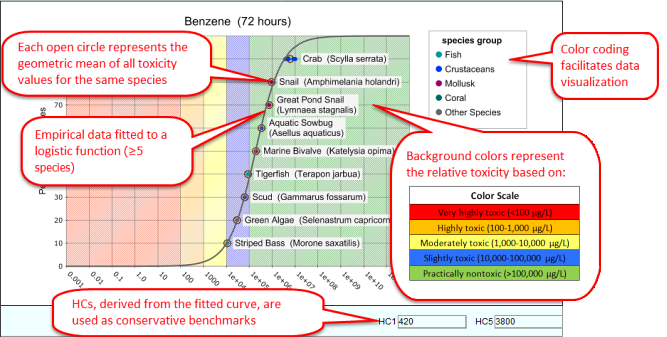 This example Species Sensitivity Distribution (SSD) curve shows the toxicity of benzene to various aquatic species, based on user selections. All concentrations are plotted on a log scale and are standardized to µg/L.

The color code scheme used in CAFE's SSD curves was adopted from the U.S. EPA Office of Pesticide Programs.

Go back to the Getting Started page.