While it depends on the circumstances for any given spill, shellfish, finfish, and whales could be affected in various ways during oil spills. Here we discuss the possible impacts and some response considerations for these marine organisms. 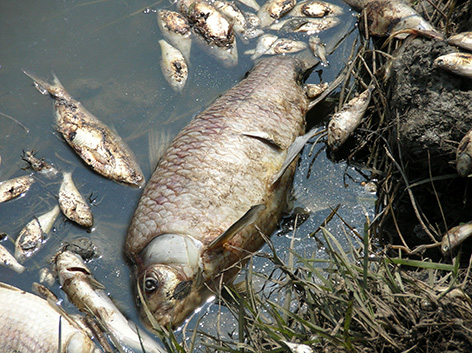 Fish were killed in the polluted waters following Hurricane Rita in the Gulf of Mexico in 2005. (NOAA)

How Are Fish Affected by Oil Spills?

Most often, shellfish and finfish either are unaffected by oil or are affected only briefly because most oils float and routes of exposure to organisms living in the water column or on the ocean floor are typically very limited. However, these animals can be substantially affected in some circumstances, especially when oil spills into shallow or confined waters.

Many shellfish species are relatively immobile and often are indiscriminant filter-feeders, which means they may not be able to avoid exposures to oil. In addition, they don’t possess the same suite of enzymes to breakdown contaminants as finfish and other vertebrates. Juvenile and adult finfish, on the other hand, usually are much more mobile, can be more selective in the foods they ingest, and have a variety of enzymes that allow them to detoxify many oil compounds. As a result, they are often better suited to limit oil exposures and related impacts.

Even so, we have observed fish kills caused by spills of light oils and petroleum products (such as diesel fuel, gasoline, and jet fuel) into shallow water. We also have found that fish eggs in shallow water, such as salmon eggs in a streambed, can be wiped out by an oil spill. Other habitats of concern for fish kills are in contained areas, such as lakes, lagoons, and some shallow-water nearshore areas, where spilled oil naturally concentrates. For example, in 1994, territorial reef fishes in nearshore areas off Puerto Rico were greatly affected by No. 6 fuel oil spilled from the Barge Morris J. Berman.

The type of oil and the timing of the release influence the severity of oil's effects on fish. Light oils and petroleum products can cause acute toxicity in fish, but the toxic event is generally over fairly quickly. Heavier oils may not affect fish at all, or, in the cases of fish in larval or spawning stages, may be quite detrimental, as in the case of the 2007 Cosco Busan spill in San Francisco Bay.

If there's reason to believe that fish in the vicinity of an oil spill have been contaminated by oil, fish from that area cannot be sent to markets or sold to people who might eat them. Only when testing shows that fish are no longer contaminated would they be allowed to be sold for human consumption. Read more about NOAA's protocols for testing seafood safety after an oil spill. 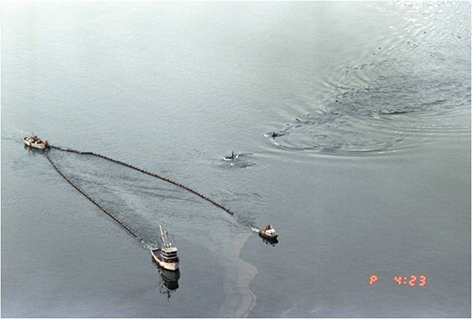 How Are Whales Impacted during Oil Spills?

While we are very concerned whenever a spill occurs in an area where marine mammals like whales can be found, we rarely ever actually see oil on whales. To avoid this during an oil spill, "hazing" methods are sometimes used to deter whales from the area of the spill. However, this doesn't mean that oil doesn't affect whales. Some research by Craig Matkin (2008) suggests that killer whale (Orcinus orca, or orca) populations can suffer impacts when exposed to oil.

For example, research studies indicate that a pod (group) of resident killer whales in Prince William Sound, Alaska, has suffered some pretty severe impacts from the 1989 Exxon Valdez spill, because the number of whales in the pod has decreased steadily and significantly since the spill. Normally, the population of these animals is quite stable and changes occur very slowly over a long period of time. Members of this pod were observed in areas where oil was visible on the water in 1989. So, even though no one saw oil on whales, there is strong indirect evidence that the oil did impact them.

If spill responders ever were to encounter a whale with oil on its skin (for example, on a beached animal), they would call in experienced veterinarians and wildlife rehabilitation specialists. We can only speculate about what would happen next. Two immediate concerns would be skin irritation from contact with the oil and inhalation of oil vapors. A beached whale would be suffering from other stresses as well, so it would probably be in pretty rough shape.

Surface contamination would be removed with a mild detergent. Inhalation of oil vapors would represent a much more serious problem, because it can lead to pneumonia and other complications. Ultimately, it might be necessary to move an oiled whale to a location where it could recover and be monitored, and hopefully finally be released.

More Information about Oil's Effects on Animals and Plants

How Do Oil Spills Affect Sea Turtles? Oil spills represent one of many threats to already-imperiled sea turtles, which can suffer various impacts from spills at all stages of life and in many different marine habitats.

How Do You Keep Killer Whales Away From an Oil Spill? NOAA has identified tools and techniques to deter endangered killer whales from swimming through oil spills.

How Fish Cope with Exposure to Oil [Video]: Offered by the Gulf of Mexico Sea Grant Oil Spill Science Outreach program, this short (< 3 minute) video describes how fishes’ bodies process oil they encounter in their environment.

Why Are Seabirds so Vulnerable to Oil Spills? Learn how the classic characteristics of seabirds such as the Common Murre puts them at greater risk of encountering spilled oil.

Exxon Valdez oil spill: Find out what our team of marine biologists has learned about the effects of the 1989 Exxon Valdez spill on the plants and animals of Prince William Sound, Alaska. In particular, take a look at the following pages: How Toxic Is Oil?, Has Prince William Sound Recovered From the Spill?, How Does High-pressure, Hot-water Washing Clean up Spilled Oil?, and Mearns Rock Time Series.

Injured Animals and Habitat Photo Gallery: Find pictures of animals and habitats harmed by and at risk from oil spills.

How Oil Affects Birds: The nonprofit International Bird Rescue explains why oil can be particularly lethal to seabirds.