Thousands of oil spills occur in U.S. waters each year, but most are small in size, spilling less than one barrel of oil.

Yet since the iconic 1969 oil well blowout in Santa Barbara, California, there have been at least 44 oil spills, each over 10,000 barrels (420,000 gallons), affecting U.S. waters. The largest of which was the 2010 Deepwater Horizon well blowout in the Gulf of Mexico.

NOAA's Office of Response and Restoration has created the following graphic listing these spills based on records and information from its Emergency Response Division. While every effort has been made to develop a complete list, there may be additional incidents that NOAA was not involved in responding to and therefore are not represented here.

This graphic also is focused on oil spills on or into U.S. navigable waters, which excludes terrestrial and underground spills. Spill volumes may be inexact due to the causes of some incidents, such as fire, sinking, and hurricanes.

In addition, even relatively small oil spills can cause major environmental and economic harm, depending on location, season, environmental sensitivity, and type of oil. As a result, this graphic also includes examples of major U.S. oil spills less than 10,000 barrels. 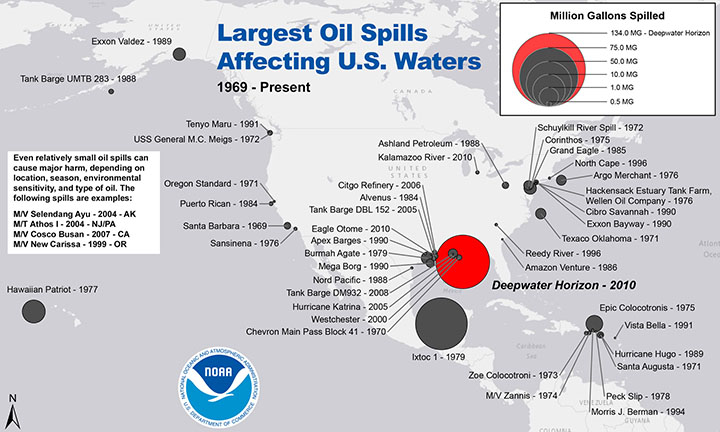