How Do Spills Happen? 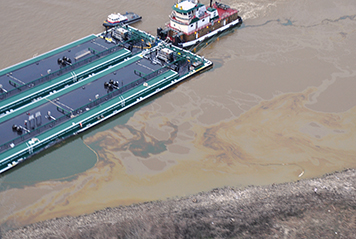 Spills can be caused by:

Oil floats on saltwater (the ocean) and usually floats on freshwater (rivers and lakes). Very heavy oil can sometimes sink in freshwater, but this happens very rarely. Oil usually spreads out rapidly across the water surface to form a thin layer that we call an oil slick. As the oil continues spreading, the layer becomes thinner and thinner, finally becoming a very thin layer called a sheen, which often looks like a rainbow. (You may have seen sheens on roads or parking lots after a rain.)

Depending on the circumstances, oil spills can be very harmful to marine birds and mammals and also can harm fish and shellfish. You may have seen dramatic pictures of oiled birds and sea otters that have been affected by oil spills. Oil destroys the insulating ability of fur-bearing mammals, such as sea otters, and the water-repelling abilities of a bird's feathers, thus exposing these creatures to the harsh elements. Many birds and animals also ingest (swallow) oil when they try to clean themselves, which can poison them. Depending on just where and when a spill happens, from a few up to hundreds or thousands of birds and mammals can be killed or injured.

How do people clean up the oil?

Once oil has spilled, any of various local, state, and federal government agencies as well as volunteer organizations may respond to the incident, depending on who's needed. People may use any of the following kinds of tools to clean up spilled oil:

Which methods and tools people choose depends on the circumstances of each event: the weather, the type and amount of oil spilled, how far away from shore the oil has spilled, whether or not people live in the area, what kinds of bird and animal habitats are in the area, and other factors. Different cleanup methods work on different types of beaches and with different kinds of oil. For example, road equipment works very well on sand beaches, but can't be used in marshes or on beaches with big boulders or cobble (rounded stones that are larger than pebbles, but smaller than boulders). Learn about the role NOAA's Office of Response and Restoration plays in responding to oil spills.

People also may set up stations where they can clean and rehabilitate wildlife. Sometimes, people may decide not to respond at all to a spill, because in some cases, responding isn't helpful or even adds to the damage from the spill.

Next page: Find out who takes care of the problem and what we all can do to prevent future oil spills.

Want to Find Out More?

Explore other ways to learn about the ocean and the impacts of oil.