What Happens During an Oil Spill? 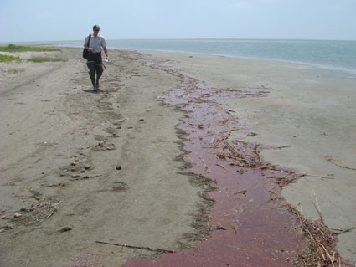 Oil stranded on the North Chandeleur Islands, Louisiana, in 2010 after the Deepwater Horizon/BP oil spill in April. (NOAA)

When we talk about oil spills, how much oil are we talking about?

These big numbers are hard to relate to everyday life, so let's make some comparisons. To better understand how much 11 million gallons of oil is, check the table below. It shows how many familiar rooms or buildings would be filled up by the approximate amount of oil spilled from the Exxon Valdez. For example, that oil would have filled up nine school gyms or 430 classrooms.

What do we use all this oil for?

You may not be aware of all the ways we use oil. We use it to:

Next page: Find out how spills happen and how people clean up the oil.

Want to Find Out More?

Explore other ways to learn about the ocean and the impacts of oil.